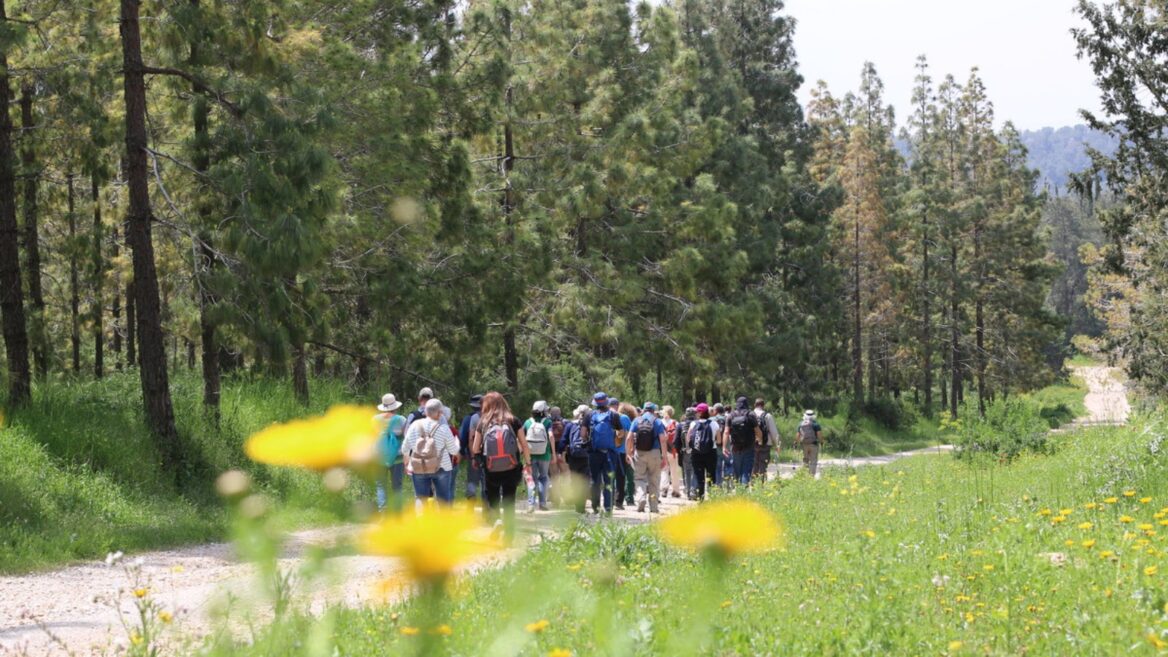 According to the Gospel of Luke, after Jesus was resurrected, he met two disciples on the road from Jerusalem to the village of Emmaus Nicopolis, about 30 kilometers (18.6 miles) to the west, in what is today Ayalon Canada Park.

The disciples apparently did not recognize Jesus at first. When they arrived at Emmaus, they invited Jesus to stay the night; only then, when they sat and ate together, did they understand with whom they had been walking.

A newly inaugurated hiking path, the Emmaus Trail, allows modern trekkers to follow in the footsteps of that story.

The Emmaus Trail starts from the midpoint between Jerusalem and Emmaus, near the village of Abu Ghosh, cutting the total distance to a more manageable 18 kilometers (11 miles).

This is one of the prettiest, least traveled routes in the Judean Hills, ideal for hikers looking for a slightly off-the-beaten-track outing regardless of their interest in the biblical backstory.

The trailhead begins just past the entrance to the Saxum Visitor Center at the north end of Abu Ghosh.

The center, run by the nonprofit Saxum International Forum headquartered in Rome, houses a state-of-the-art museum dedicated to the life of Jesus. There’s a multimedia tour with maps and models, interactive touchscreen displays, and 4D projections with descriptions of holy sites across different time periods. There’s also an 80-person chapel and lecture hall.

The center opened in late 2019 but has seen nary a Christian pilgrim during the 2020 pandemic year. Normally, more than half of Israel’s 4.5 million annual tourists are Christian pilgrims, according to the Israel Tourism Ministry.

Henri Gourinard is a lecturer on historical geography and history of the Near East at the Polis Institute in Jerusalem. His 50-page illustrated guidebook to the Emmaus Trail clearly lays out the route and ruins along the way.

“It’s a short trail so it can fit into a normal pilgrimage,” Gourinard says.

There are four “legs” to the Emmaus Trail. To get going, descend on the black trail into Nahal Yitla, framed by breathtaking high hills on either side (look right and you’ll see Har HaRuach – literally “Wind Hill”), for five kilometers before taking a sharp U-turn and ascending toward a small picnic area west of Neve Ilan.

The ascent is on a paved road, making it not the most picturesque, but at least it’s brief. The scenery in general is dotted with olive and almond trees and plenty of wildflowers. 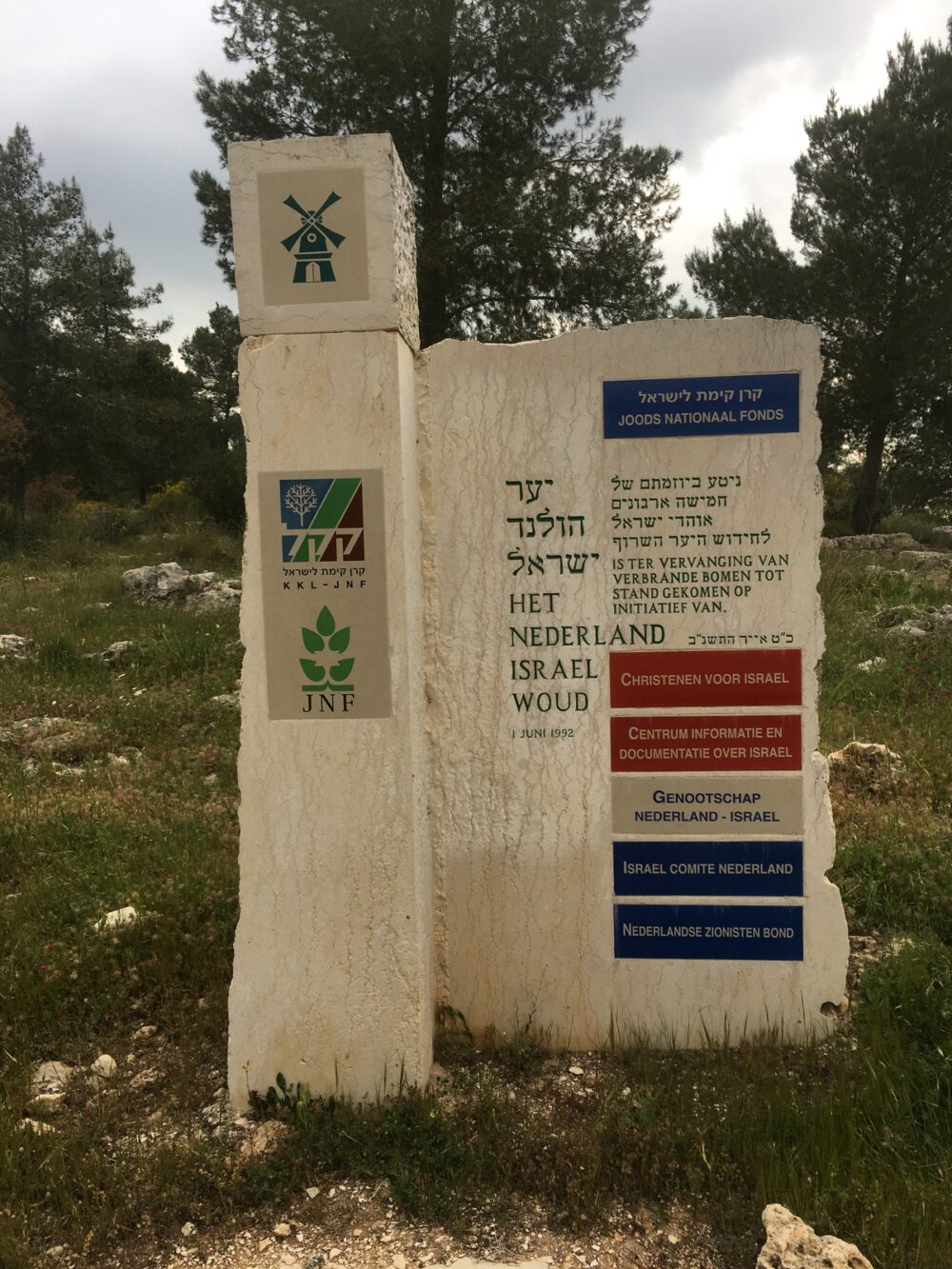 The next five kilometers continue west on the red trail with lovely views of Nahal Ilan. You’ll soon enter the JNF Netherlands Forest. (You’ll know because the signs are in Hebrew, English and Dutch.)

Take a stop at Horvat Matzad, a road station used during the Roman and Byzantine periods. From here you can see all the way to Tel Aviv in one direction and, in the other, Israel’s famous “Elvis” diner, which is filled with memorabilia from the life of Elvis Presley (including an oversized statue in the adjacent gas station parking lot). 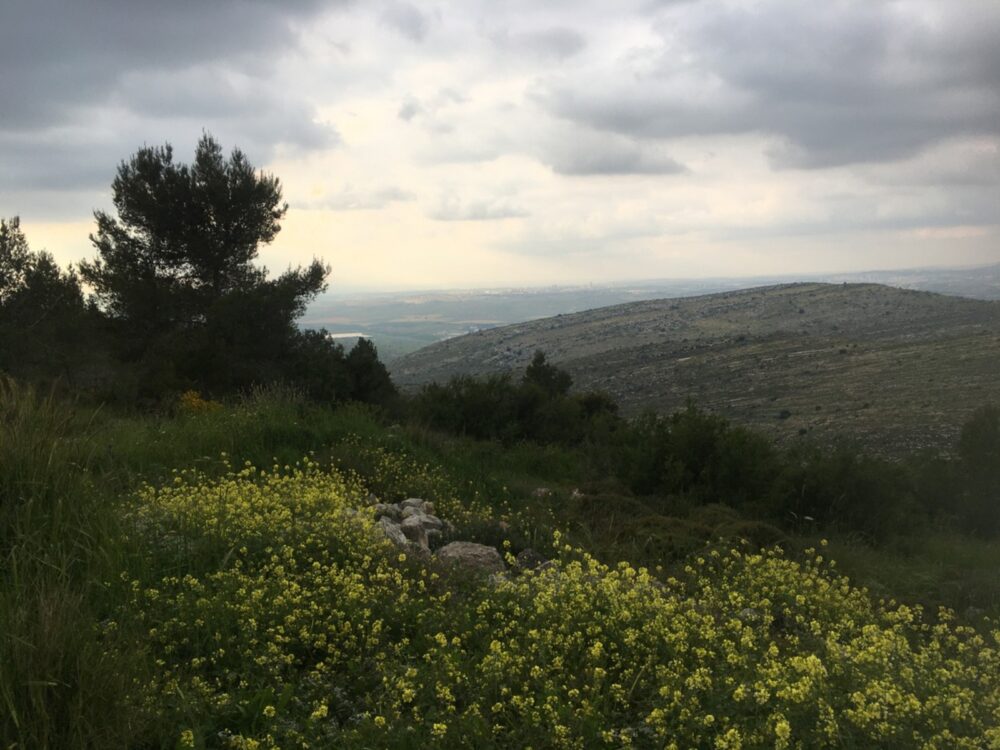 View of Tel Aviv from the Emmaus Trail. Photo by Brian Blum

After a short walk, you’ll reach a section of tall cylindrical stone slabs – Roman milestones – that may remind you of a mini-Stonehenge. A Roman “mile” corresponded to a thousand double paces – approximately 1,500 meters. The road, built and used originally by the Romans, connected Jerusalem with Jaffa’s seaport.

This is where our hiking party turned left on the blue trail to make our way to our car. We had parked it at the Sha’ar Hagay Paz gas station, cutting seven kilometers off the total. Our portion of the hike took us just over three hours. Allot four to five hours for the full 18-kilometer hike.

Had we continued on the red trail (which soon turns into a green trail after a brief interlude on a black trail), we would have passed the deserted village of Deir Ayyub, the “artillery ridge” (named as such because there was an artillery battalion stationed there during the 1948 War of Independence), the ancient fortress of Khirbet el’Aqed, and finally a two-kilometer path through Ayalon Canada Park. 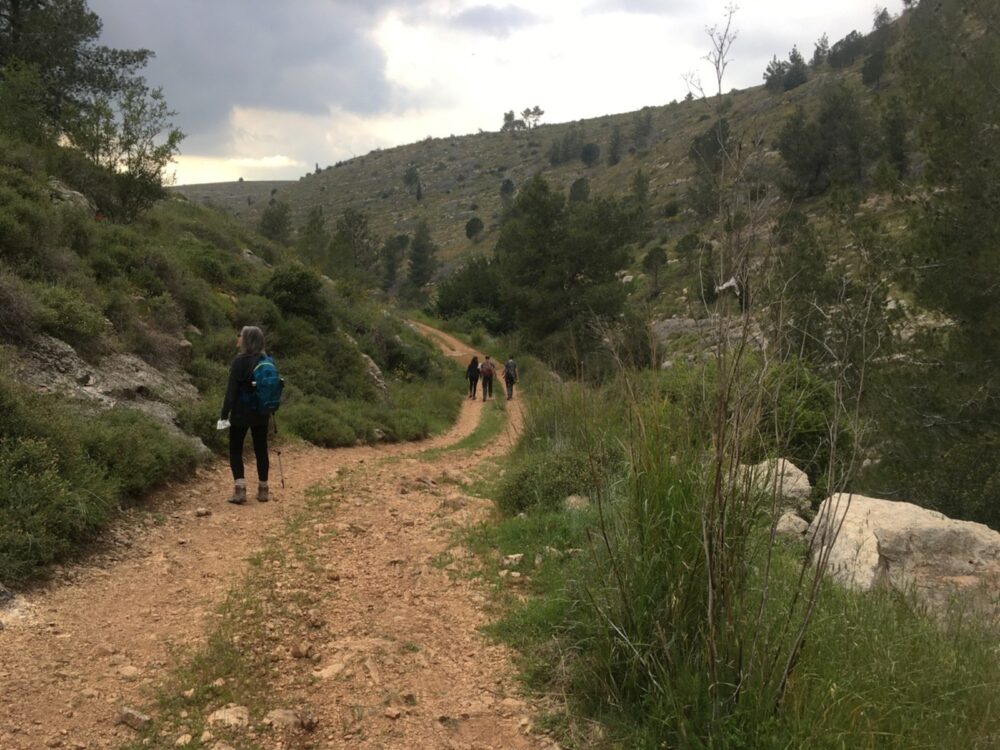 Hiking along the Emmaus Trail. Photo by Brian Blum

This last leg – which runs through Park Ayalon’s main attraction, Emek HaMayanot (Spring Valley) – includes most of the archeological sites along the trail.

You’ll find a Roman bathhouse, an ancient winepress, a square water reservoir dating back to the Second Temple period (possibly a Jewish ritual bath), a monolithic tomb carved from a single block of stone, and several burial caves. The final stop on the tour is the monastery of Emmaus Nicopolis.

It’s advised to start the hike from Abu Ghosh since it’s mostly downhill from there. But if you have a limited amount of time, park at the western end of the trail in Park Ayalon and trek in and out. 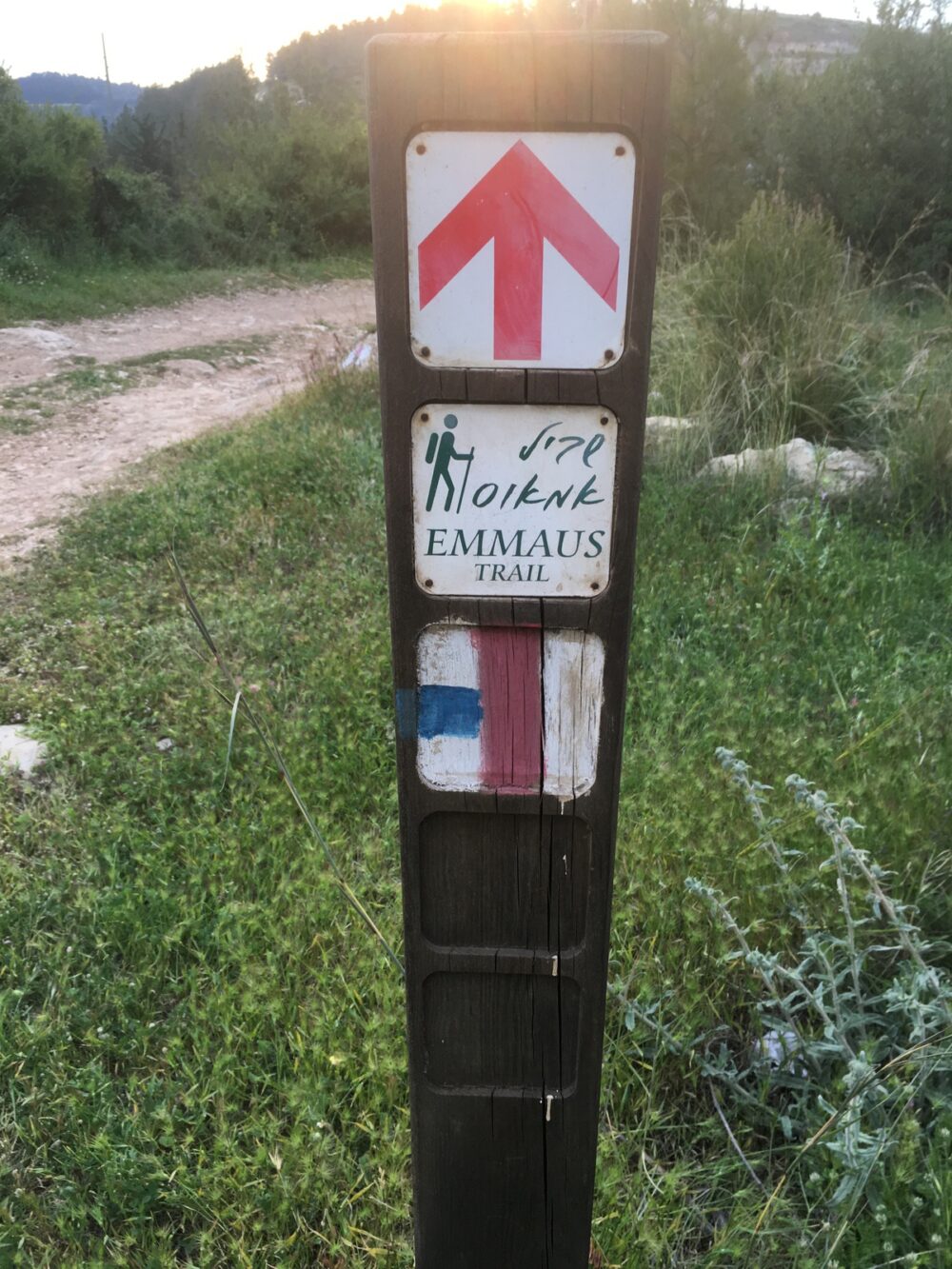 The one Emmaus Trail sign. Photo by Brian Blum

The Emmaus Trail is not officially marked as such due to the last segment between Ayalon Canada Park and the Emmaus Nicopolis monastery, which is home to a Catholic community called the Beatitudes.

Gourinard tells ISRAEL21c that, in order for the JNF to officially mark the trail, it must be safe. From Ayalon Canada Park to the monastery, the only access is a brief stretch on a highway with no shoulders. (Gourinard recommends driving rather than walking the hundred meters.) The two groups are trying to figure out how to bridge this gap.

Emmaus was the site where Judah the Maccabee (of Hanukkah fame) defeated the Syrian Seleucid army in 166 BCE.

Following the decline of the Hasmonean period in 47 BCE, Emmaus became the regional capital. The name was changed to Nicopolis around 220 CE when it was upgraded to the status of a Greek city (“polis”). Nicopolis means “city of the victory.” The site was abandoned in 639 CE following the “Emmaus Plague.” 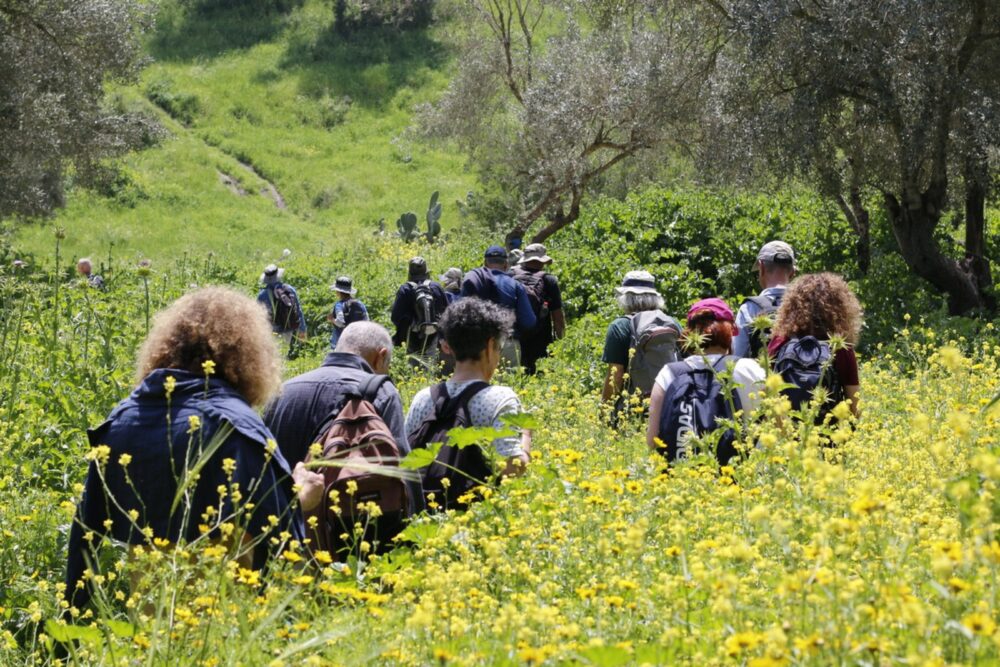 Gourinard’s guidebook is filled with historical details – fitting given that Gourinard recently received his tour guide license. He is now waiting for the tourists to return so he can guide them along his beloved Emmaus Trail.

For more information including a zoomable trail map, visit the Saxum Visitor Center website. Stop in at the start of your hike to pick up a copy of Gourinard’s guidebook.

For even more Christian-inspired hiking in the Holy Land, check out the 65-kilometer Jesus Trail from Nazareth to Capernaum near Tiberias in the Galilee area.

“The difference is that with the Emmaus Trail you can do it in half a day,” Gourinard notes. “It’s a nice way to end a pilgrimage and to meditate on before going back to your country.”