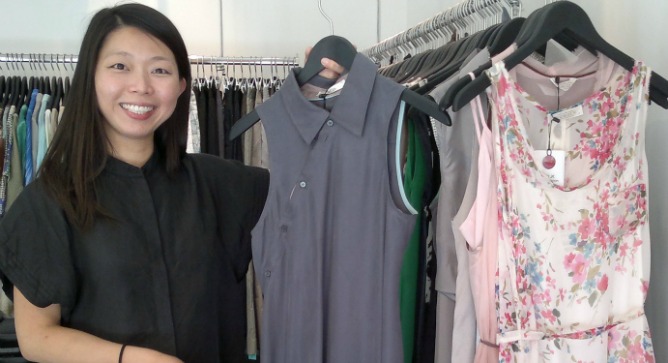 Gin Lee with a collection of her dresses in Sofia, a Jerusalem boutique. Photo by Abigail Klein Leichman

Brought up in Singapore, educated in London and established in Shanghai, where did women’s wear designer Gin Lee launch her first label? In Israel.

At a Jerusalem café near her home in the trendy Nahlaot neighborhood – she and her Israeli husband moved there in August 2010 — Lee explains to ISRAEL21c that launching her first solo business here made good sense.

“Most young designers cannot get started without a lot of capital,” she reasons. “Here in Israel, there is a great ‘lama lo’ [‘why not’] mentality. Shop owners are happy to take designs on consignment from someone new. If I even thought about doing this in London or in Shanghai, I wouldn’t get a foot in the door. So Israel offered me a great advantage.”

Lee, 35, has so far created six small GINLEE collections of silk dresses and blouses — two each year, 30 to 40 pieces per color per style. They are sold at upscale Israeli retailers such as Sofia in Jerusalem, Levin in Tel Aviv, Didi in Ramat Aviv, and all 12 Razili shops.

In April, Lee was chosen as one of 24 up-and-coming designers to participate in “Aphrodite is Searching for a Dress,” a special exhibition in a Bat-Yam beach gallery to benefit ALUT, the Israeli Association for Autistic Children, from June 11 to July 7. Each designer was asked to dress a mannequin in an original outfit inspired by sea mythology.

Lee chose the legend of Mat-Su, a Chinese sea goddess who fell into a trance and tried to save her earthly brother from drowning as she wove a tapestry on her loom. Accordingly, Lee’s mannequin is attired in a delicate web of blue threads and lines. 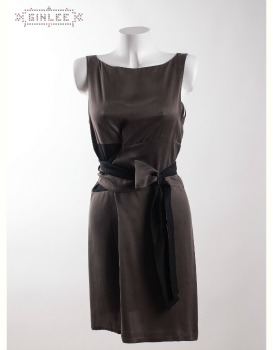 “I am inspired by a lot of things, from graphics, lines, shapes and forms, vintage items to construction of patterns,” Lee says. “I like juxtaposition — combining elements with opposite elements — and I always have a slight twist to my works. My style is simple, elegant, clean. I pay a lot of attention to the smallest details and good workmanship.”

Lee studied women’s wear design at Central St. Martins in London. After graduating in 2002, she worked for UK designer Karen Millen and in 2004 accepted a job teaching at Lasalle Design Institute in Shanghai.

While on vacation in western China, she met a traveling Israeli, Tamir Niv. They lived together in Shanghai for five years, returned to Israel in 2010 and married in Singapore in March 2013. Niv, now finishing an industrial design degree at Bezalel Academy of Art and Design in Jerusalem, made a splash at the 2012 Milan Design Week for his low-cost tool to dig survivors out from under rubble.

At the beginning of 2008, Lee was headhunted by Li & Fung, one of the largest global trading companies, to establish a product development department servicing European customers such as the Inditex Group, which includes such chains as Zara, Bershka and Pull & Bear. She also worked with Ben Sherman, Next and the Israeli fashion house Castro.

When Lee came to live in Israel, her expertise with the Chinese market brought her job offers in fashion merchandising. However, she preferred to take the riskier but potentially more rewarding path of starting her own label. 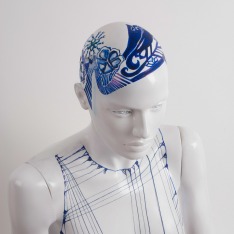 Gin Lee’s design for “Aphrodite is Searching for a Dress” exhibit.

“I can draft and grade my own patterns, I know how to place orders and how to buy. I thought, with the move, I’m going to finally design properly for myself,” she says in her Cockney-mix accent. She’s working hard at learning Hebrew.

Though a group of Tel Aviv designers invited her to join them in a cooperative retail venture, having a store was not her goal. “I come from a retail family and I know what it means to open the door and wait for customers,” she says. “Once you have a shop, you are tied to it. It would have been easier, but I don’t believe in taking the simple route. I believe in doing something well, all the way.”

Lee laughs when recalling that it took awhile to understand the local market. Her first winter collection, for instance, was geared to the much colder climate of Europe. She caught on fast, but was careful to retain a look different than the more typical “Israeli casual.”

“The ‘lama lo’ mentality also means there are many fashion designers here, and you have to find a niche. So I decided to stay on a certain level in the high-end market,” says Lee, who works almost exclusively with pure silk sourced in Shanghai. Her clothing is manufactured in Shanghai home workshops.

Lee’s native Singapore is often compared with Israel. Both are small countries surrounded by Muslim neighbors, lacking natural resources, made up mostly of immigrants who value education, and were British colonies until the mid-20th century (Singapore became an independent republic in 1965).

The culture is quite different, she admits. “We’re not as verbal,” she observes with a smile. “In Israel, people tend to shout on the bus — that would never happen in Singapore. But Singapore is a bit boring for me. There is so much going on here in Israel. I think it’s a hidden gem.”

Her hope is to connect all her “homes” – Israel, Shanghai and Singapore — with her work so that she can spend time in each locale without disrupting her career. “I don’t want to start over again and again. Israel is my home, but so is Singapore, and I don’t see why it cannot all be connected. Lama lo?”

UNCOVER ISRAEL - Get the ISRAEL21c
Weekly Edition free by email
Sign Up Now!
Bring Israel's story to life.
Millions of people around the world rely on us to gain a deeper understanding of Israel. We are the trusted source for original content you won't find anywhere else.
You can make a difference. Donate today to support journalism that brings Israel’s story alive.
SUPPORT ISRAEL21c
Read more on:   People, fashion, Gin Lee