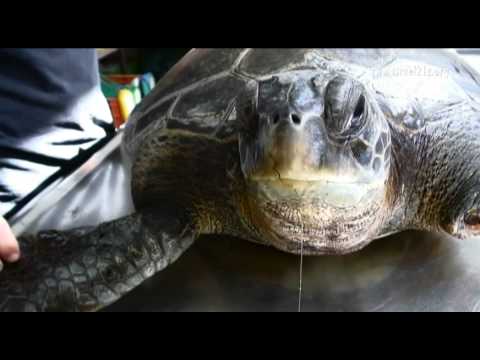 It took over three-and-a-half years of innovative treatment to rehabilitate Frankie the sea turtle before this loggerhead terrapin could be released back to the wild. And though there were raised doubts whether Frankie – who arrived at the Israeli Sea Turtle Rescue Center with a fractured skull and broken jaw – could ever swim free again, volunteers and staff recently celebrated her return to the Mediterranean Sea.

Frankie was the worst case scenario to ever arrive at the center. After being run over by a boat, this enormous turtle was expected to die.

The center in Mikhmoret — the only rehabilitation center in the Middle East — nurses some 50 injured turtles back to health every year. Staff there also gathers and incubates eggs and returns the hatchlings to the beaches; raises public awareness on the plight of the turtles; and helps preserve the coastline.

Frankie arrived at the center in 2009, weighing 22-kilograms. She was released from Gador Beach into the Mediterranean Sea weighing 57-kg and measuring 15-centimeters longer.

UNCOVER ISRAEL - Get the ISRAEL21c
Weekly Edition free by email
Sign Up Now!
Bring Israel's story to life.
Millions of people around the world rely on us to gain a deeper understanding of Israel. We are the trusted source for original content you won't find anywhere else.
You can make a difference. Donate today to support journalism that brings Israel’s story alive.
SUPPORT ISRAEL21c
Read more on:   News, Mediterranean Sea, sea turtles