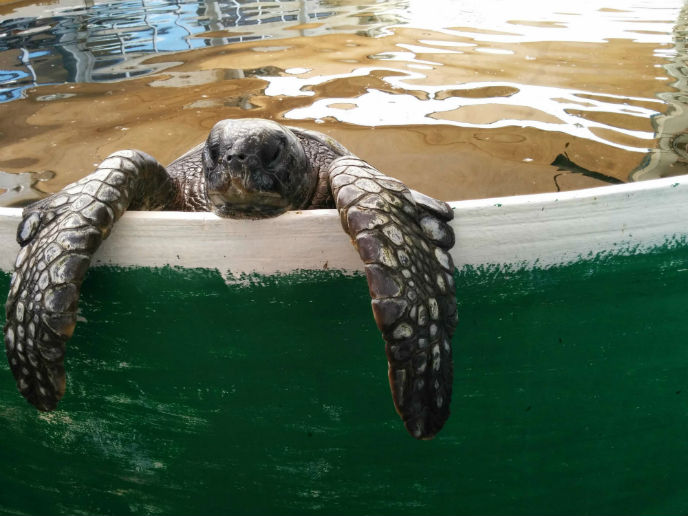 Mazal the sea turtle may be blind, but she made sure everyone standing around her pool could see her splashing as she swam by. Mazal was injured in the Mediterranean waters and brought to the Israel Sea Turtle Rescue and Rehabilitation Center in Mikhmoret, about a half hour’s drive north of Tel Aviv.

She was one of nine turtles in residence at this unique hospital and rehab center on the day ISRAEL21c visited. The number of “patients” changes on a daily basis.

The center not only cares for rescued turtles but also runs a breeding program and educates the public about the plight of the world’s sea turtle population and the need for ocean awareness.

There’s no better way to hammer home environmental education than by a hands-on experience. So, just like hospital patients have visiting hours, the turtles also accept visitors. For my seven-year-old son, who has always had an affinity for sea turtles, a day out at this remarkable center was the best activity we could have chosen.

The center runs guided tours almost every Saturday for small groups. The tours are in demand and we had to book two weeks ahead. 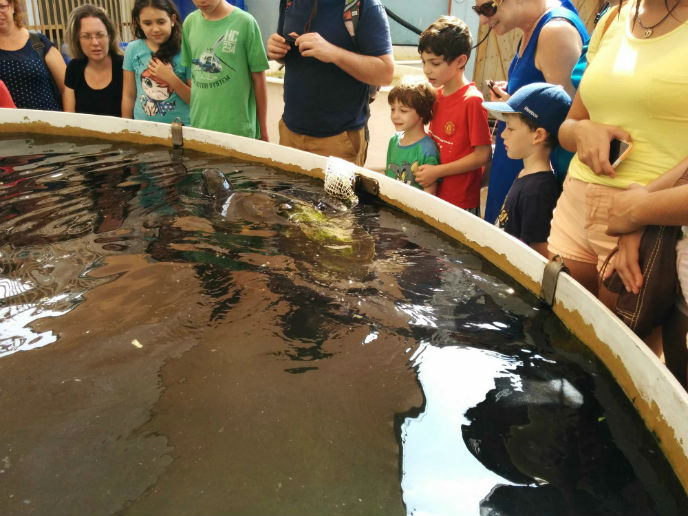 Most Saturdays, tours of the sea turtle center are a popular family activity. Photo by Viva Sarah Press

Our guide, Ori, gave a presentation about the turtles, the dangers threatening them (natural and manmade), and showed us how to differentiate between green sea turtles and brown loggerheads.

On our way to visit the turtles in the treatment area, Ori reminds us that “just like you don’t pet people who are hospitalized, you may not touch the turtles in the pools.”
Mazal is the first turtle we meet. She’s also the reason the Israel Sea Turtle Rescue and Rehabilitation Center exists.

Back when he was a student in 1999, marine biologist Yaniv Levy found Mazal tangled up in fishing nets on the beach. He asked the Mevo’ot Yam naval school – which sits on the coast of the Mediterranean Sea in Mikhmoret – for temporary access to its grounds so that he could set up a tank with sea water and nurse her back to health.

Fifteen years later and the “temporary” access has become permanent. So while Mazal – whose name means “luck” — will not return to the open seas because of her disability, she brought much luck to other Israeli sea turtles needing special care.

Mazal shares a tank with Hofesh (Freedom), who despite his name will never be able to return to the open seas. He lost his two left flippers after being entangled in a fishing net, leaving him unable to lift his head to breathe.

However, Hofesh won a new lease on life when an Israeli design student created a set of artificial fins for him. Now, everyone’s waiting for Hofesh and Mazal to breed.

We also met Meira, a loggerhead sea turtle brought to the center in September after being found off the coast of Ashkelon with a fishing line sticking out of her mouth. Rescue center staff removed the hook she had swallowed and are now nursing her back to a regular eating schedule, with the goal of releasing her soon.

Another new patient is Dvash (Honey), a loggerhead sea turtle found this past Rosh Hashana. He, too, swallowed a fishing hook and is now recovering. At the moment, he is refusing to eat but the center’s volunteers will continue to try and coax him to take a bite of something before returning him to the Mediterranean.

Ori points out the seaweed and chopped fish fed to the turtles. The kids squeal with delight when they’re told the Styrofoam-like bits in the pools are turtle poop.

Our tour sums up with an appeal for volunteers. My kids are very disappointed when they realize that volunteers need to be at least 16 years of age.

UNCOVER ISRAEL - Get the ISRAEL21c
Weekly Edition free by email
Sign Up Now!
Bring Israel's story to life.
Millions of people around the world rely on us to gain a deeper understanding of Israel. We are the trusted source for original content you won't find anywhere else.
You can make a difference. Donate today to support journalism that brings Israel’s story alive.
SUPPORT ISRAEL21c
Read more on:   Mikhmoret, Hofesh, rescued turtles, unique hospital and rehab center, sea turtles, Spotlight in Israel