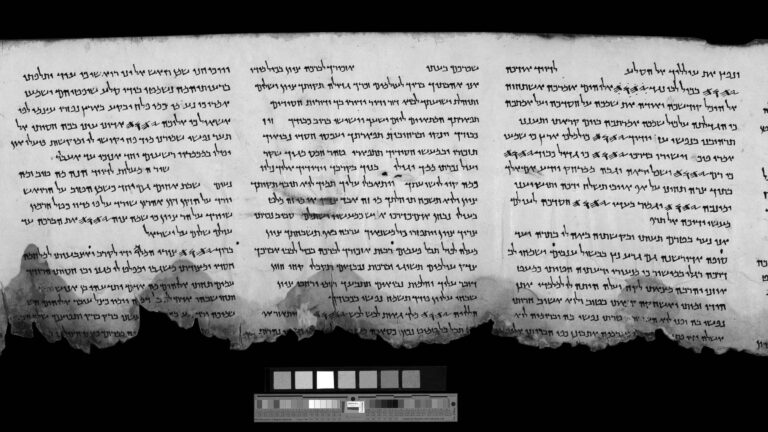 Spectral image of Psalms scroll, revealing some of the letters for the first time. (Photo: Yair Medina and Shai Halevi, courtesy of the IAA)

“Only five conservators worldwide are authorized to handle the Dead Sea Scrolls. Now, everyone can ‘touch’ the scrolls on-screen around the globe, and view them in spectacular quality, equivalent to the original,” said Shuka Dorfman, Director of the Israel Antiquities Authority.

The new site offers detailed views of five of the most complete scrolls, which were found at Qumran nearly 2,000 years ago.

“The IAA, in collaboration with Google, presents the scrolls online, using the most advanced imaging technology. Thus, this most important national treasure is available to the general public, preserving it for future generations,” said Dorfman.

“The Dead Sea Scrolls Project with the Israel Museum enriches and preserves an important part of world heritage by making it accessible to all on the internet,” said Professor Yossi Matias, Managing Director of Google’s R&D Center in Israel.

The library was assembled over the course of two years using advanced technology first developed by NASA.

UNCOVER ISRAEL - Get the ISRAEL21c
Weekly Edition free by email
Sign Up Now!
Bring Israel's story to life.
Millions of people around the world rely on us to gain a deeper understanding of Israel. We are the trusted source for original content you won't find anywhere else.
You can make a difference. Donate today to support journalism that brings Israel’s story alive.
SUPPORT ISRAEL21c
Read more on:   News, Dead Sea, Google, Israel Antiquities Authority, Qumran, Dead Sea Scrolls