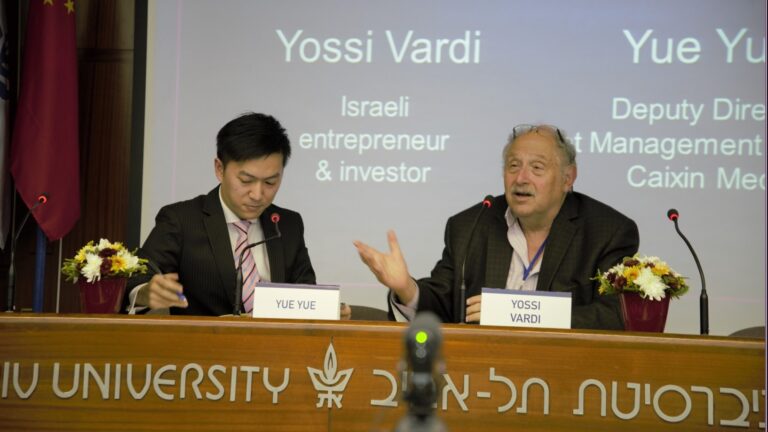 “Innovate the Future” was the theme of a December 27 forum at Tel Aviv University, where dozens of entrepreneurs, thought leaders and innovators from China and Israel gathered to discuss tech links between the two countries.

Hosted by Chinese media group Caixin, which sent a delegation to visit Israel and its leading tech firms, the forum highlighted the fact that China is now Israel’s largest trading partner to the tune of $11.4 billion annually.

The event included a dialogue between Caixin’s Yue Yue and legendary Israeli entrepreneur Yossi Vardi, who has founded dozens of companies and is credited with launching Israel’s startup boom.

Vardi has been visiting China since 1995 and recently organized an Israeli innovation festival there. He shared thoughts on criteria for investment – looking at team talent more than the business plan – and how failure can be a driver for success.

Representatives of the new Guangdong Technion Israel Institute of Technology (GTIIT), a cooperative academic and research center for engineering, science and life science in China, told attendees that 60 percent of GTIIT’s faculty will come from the Technion, exposing thousands of Chinese undergraduates to Israeli technology expertise.

Eytan Schwartz, CEO at Tel Aviv Global, predicted that despite cultural and regulatory differences, Israeli and Chinese businesses may one day enter other foreign markets together rather than simply engaging in acquisitions.

Amos Avner, founding partner at StartupEast – a platform leading Israeli startups into Asian markets – says the forum was practical and constructive thanks to “the direct dialogue between policymakers from both sides.”

UNCOVER ISRAEL - Get the ISRAEL21c
Weekly Edition free by email
Sign Up Now!
Bring Israel's story to life.
Millions of people around the world rely on us to gain a deeper understanding of Israel. We are the trusted source for original content you won't find anywhere else.
You can make a difference. Donate today to support journalism that brings Israel’s story alive.
SUPPORT ISRAEL21c
Read more on:   News, Yossi Vardi, China