Works by Israeli artists find a home in the $55 million Herta and Paul Amir Building, designed to ‘move visitors and offer a remarkable social experience.’ 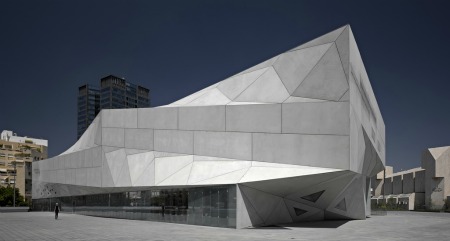 Art-lovers from across Israel and around the globe have come flocking to visit the new $55 million wing of the Tel Aviv Museum of Art. The awe-inspiring, five-story Herta and Paul Amir Building has doubled the museum’s previous space.

Joining the VIP guests, donors and friends of the museum at the November opening were curators from some of the most prestigious museums in Paris, including Centre Pompidou, Musee D’Orsay and the Louvre Museum. The curator of New York’s Museum of Modern Art also made a special trip to Tel Aviv.

“The number of visitors shows that people are attracted by Israeli art,” Dr. Doron J. Lurie, a senior curator and chief conservator at the museum, tells ISRAEL21c. Lurie estimates that about 5,000 people are visiting the museum daily.

The Amir Building houses 18,500 square feet of gallery space for the museum’s comprehensive collection of Israeli art. The inaugural installation includes some 250 works dating from 1906 to the present.

“This was the vision of Prof. Mordechai Omer, the late director and chief curator of the Tel Aviv Museum. He didn’t like the idea that people came to the museum and chanced upon one Israeli art exhibit or another. He thought there should be a permanent exhibition where one could see a panoramic view of Israeli art,” says Lurie.

Featuring works from Reuven Rubin to Yigal Tumarkin and Zoya Cherkassky, Michal Neeman to Gal Weinstein and Michal Rovner, the new exhibition is aptly titled “The Museum Presents Itself: Israeli Art from the Museum Collection,” spanning 1906 to 2011.

The galleries in the new wing will present dozens of rotating exhibits every year. On display for the opening are an installation of Israeli photography of the past 20 years and installations by leading Israeli designers Chanan DeLange and Yaakov Kaufman.

The inauguration also included a much talked-about exhibit by German painter-sculptor Anselm Kieffer, which the artist conceived with the late Prof. Omer. The exhibition focuses on Jewish tradition, mysticism, mythology and literature.

New building as a piece of art

Appropriately, the Amir building opened to the public just as Tel Aviv declared 2012 the Year of Art. 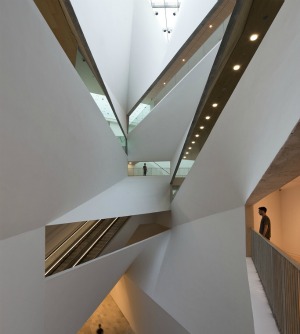 Photo by Amit Geron
Inside the new wing.

“The city will present a calendar of dozens of exhibitions, conferences, community projects, educational initiatives and festivals, many of them with international partners — and as the centerpiece, we will celebrate the opening of the Herta and Paul Amir Building,” said Mayor Ron Huldai.

The building, hailed as an artistic masterpiece, was designed by Harvard University Department of Architecture chairman Preston Scott Cohen.

Cohen’s challenge was to construct a building to fit the awkward triangular site earmarked for the expansion. The result is a work of complex geometry and light-filled space, punctuated by the “Lightfall,” a 27-meter-tall atrium that spirals through subtly twisting walls of different levels.

“The museum’s program set the challenge of providing several floors of large, neutral, rectangular galleries within a tight, idiosyncratic, triangular site. The solution we proposed was to ‘square the triangle’ by constructing the levels on different axes, which deviate significantly from floor to floor and are unified by the Lightfall,” explained Cohen.

“This decision enabled us to combine two seemingly irreconcilable paradigms of the contemporary art museum: the museum of neutral white boxes, which provides optimal, flexible space for the exhibition of art, and the museum of spectacle, which moves visitors and offers a remarkable social experience,” said Cohen.

The architectural competition for the new wing was conducted in the first half of 2003. Design development began in 2005, and the groundbreaking was held in 2007.

Before the Amir building was added to the Tel Aviv Museum of Art, much of the institution’s collection was kept in storage.

The museum houses works by more than a dozen world masters — including Vincent Van Gogh, Amadeo Modigliani, and Pablo Picasso — as well as one of the world’s largest collections of Israeli art.

Photo by Amit Geron
The Amir wing at dusk.

“Our job is not to keep art in storage as has been the case until now, but rather to expose the art in the right context,” Lurie tells ISRAEL21c.

“We feel privileged to have been able to advance the work of the Tel Aviv Museum of Art, an institution that is truly at the heart of Israel’s creative community,” said Paul Amir, the Los Angeles-based real-estate developer and philanthropist who with his wife Herta provided the naming gift for the building. “With the ability to showcase the work of Israel’s artists as never before, the museum now has the potential to step up to a prominent new role on the international scene, to the benefit of everyone.”

It is said that Israel has the highest number of museums per capita in the world. And while Israelis are interested in their homegrown art, the inaugural ceremony for the new wing once again proved that Israeli art has an international allure.

“There’s no doubt that Israeli artists are known around the world,” says Lurie, “from our old masters Reuven Rubin and Mordechai Ardon to contemporary artists like Sigalit Landau and Michal Rovner. We might not be on top of the world but relatively speaking our exposure and reputation is very good. And now Israeli artists have a new home.”