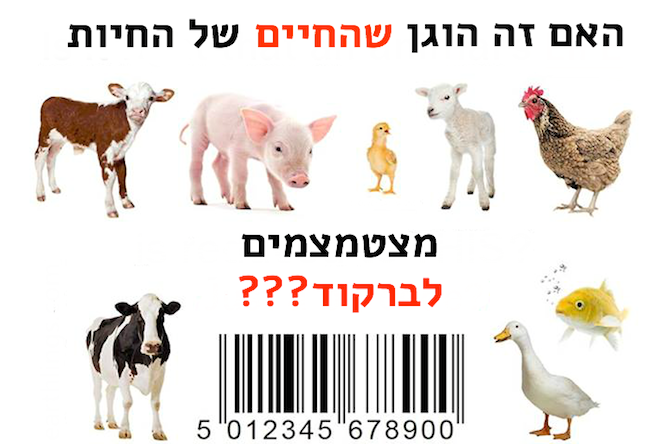 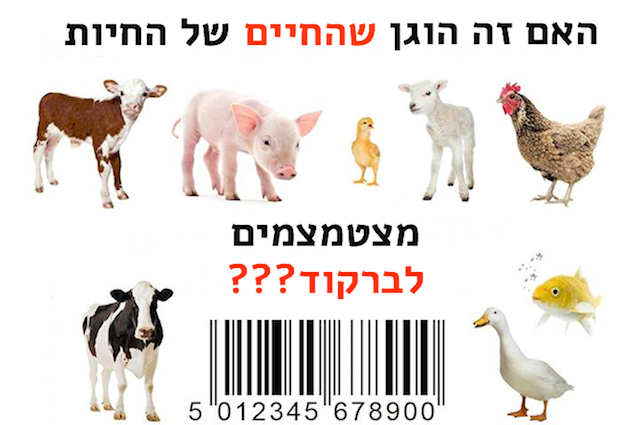 This graphic on the Vegan-Friendly Facebook page translates as: “Is it fair that the life of an animal is reduced to a barcode?”

Thousands of readers shared ISRAEL21c’s “Israel goes vegan” report. Now we have more news for you on the no-animal-products front in Israel.

Omri Paz, founder of Vegan-Friendly Israel, is expecting more than 600 people at the country’s first-ever Vegan Congress, March 7 from 9 to 3:30, in Tel Aviv.

“The concept is to take all the activities and projects that different organizations are doing and connect them to people out there looking to be more active, and talk about the situation in Israel so that every year we can meet and talk about changes that have taken place and what we can do in the future,” Paz tells ISRAEL21c.

And that’s not all. Vegan-Friendly members plan to drive a Vegan-Mobile from Kiryat Shmona to Eilat for a month. Parking in major cities, they’ll screen videos about veganism and offer activities for the public to learn about the health, environmental and animal-welfare benefits of a plant-based diet.

“After that, we will do a vegan mangal [barbecue] on Yom Haatzma’ut [Israel Independence Day), then a Shavuot festival without cheese, and then our second annual vegan festival. About 10,000 people came to our first one, four months ago.

“The Vegan Friendly mission is to publicize the positive side of veganism, so we avoid anything bloody or negative. That’s how we got into the mainstream so easily,” says Paz, the man responsible for the Israeli Domino’s Pizza chain becoming the first in the world to offer a soy-cheese option. He’s since helped persuade several Israeli restaurant and café chains to devise vegan dishes.

“So I started doing small projects, and because the truth is with me, everything was successful,” he says. He arranged for mass screenings of Yourofsky’s lecture with Hebrew subtitles, and began building a foundation to make it easier for people to stay vegan – menu options, recipes, resources and events for the Hebrew-speaking public.

He says surveys indicate the Israeli population of vegans has doubled in the past two years.

“Businesses finally see us as a market. Our Facebook group has tens of thousands of followers and thousands of recipes. Not a week goes by without a news item about veganism,” says Paz. “Israel is probably the country where it’s easiest to be vegan in the whole world.”

Meanwhile, the organization Anonymous for Animal Rights has released a location-based app, Go Vegan, which finds meat-, dairy- and egg-free entrée choices in nearby restaurants.

UNCOVER ISRAEL - Get the ISRAEL21c
Weekly Edition free by email
Sign Up Now!
Bring Israel's story to life.
Millions of people around the world rely on us to gain a deeper understanding of Israel. We are the trusted source for original content you won't find anywhere else.
You can make a difference. Donate today to support journalism that brings Israel’s story alive.
SUPPORT ISRAEL21c
Read more on:   vegan, omri paz, soy cheese, go vegan, Spotlight in Israel, Israeli food and drink