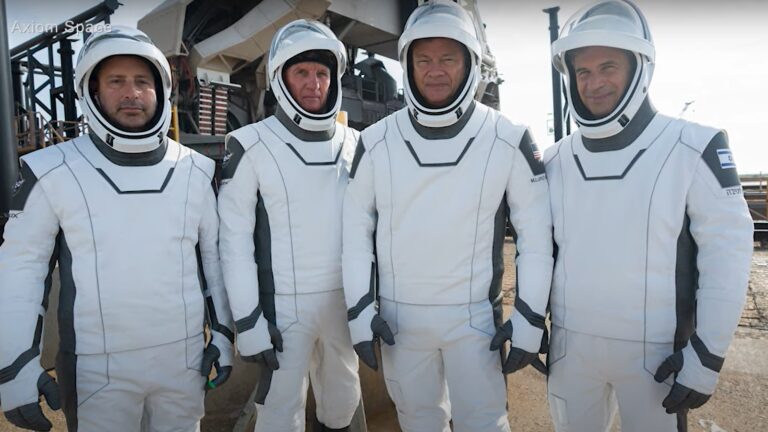 “We’re in space!” reads a jubilant banner in English, Hebrew and Arabic scrolling across the home page of Israel’s Rakia Mission today.

The rocket carrying the four astronauts docked at the ISS about 21 hours later and got a hearty welcome from the crew. Stibbe was the first to enter.

The four commercial Ax-1 astronauts have floated into the International Space Station.

“Only 241 persons from 19 countries have spent time in [the ISS] in the past decades. It is intended to serve as a giant orbiting laboratory, enabling in-depth study of various phenomena under conditions of microgravity,” according to Rakia’s homepage.

Rakia (Hebrew for “sky”) is a project of the Ramon Foundation and the Israel Space Agency in the Ministry of Innovation Science and Technology. The mission’s stated purpose is “to inspire the younger generation while advancing and expanding the Israel space industry.”

Stibbe was close with Israel’s first astronaut, Ilan Ramon, who was killed in the explosion of the Space Shuttle Columbia in February 2003. Previously a combat pilot, he’s become a successful businessman and philanthropist.

Stibbe is donating his time and all costs of the journey, including expenses related to the 44 experiments he’s taking along from Israeli scientists, entrepreneurs and students.

According to the Ramon Foundation, “The mission will enable Israeli entrepreneurs and researchers to advance innovative ideas and will provide a rare opportunity for them to test their enterprises in a unique study environment, thereby contributing to international and Israeli research industries. In addition, the mission will make diversified educational activities accessible, to benefit all Israeli children. It will in fact, be the first time that Israeli children and youth will have access to the International Space Station, in Hebrew.”

UNCOVER ISRAEL - Get the ISRAEL21c
Weekly Edition free by email
Sign Up Now!
Bring Israel's story to life.
Millions of people around the world rely on us to gain a deeper understanding of Israel. We are the trusted source for original content you won't find anywhere else.
You can make a difference. Donate today to support journalism that brings Israel’s story alive.
SUPPORT ISRAEL21c
Read more on:   News, Technology, Space, Eytan Stibbe