A revolutionary home monitoring system from the Israeli company Notal Vision keeps a daily eye on the progression of age-related macular degeneration (AMD), the Western world’s leading cause of vision loss.

Monitoring is critical, as AMD can suddenly advance from the common “dry” form — where the light-sensitive cells of the eye’s macula slowly break down – to the serious “wet” form that accounts for 90 percent of legal blindness. There is no intermediate stage of wet AMD, nor is there an effective medical treatment for dry AMD.

Notal Vision’s ForeseeHome is the first FDA-cleared home monitoring device clinically proven to detect the slightest changes in vision and is available by prescription on a rental basis throughout the United States.

If a change above the patient’s baseline is detected via computer analysis of the three-minute screening, Notal’s call center in St. Louis contacts the physician.

But now it’s really become the talk of the town (or the globe, to be more precise) because of recently published results of an unusually large US clinical study on the efficacy of the device.

“At the end of 2009, we had done some small clinical trials and got FDA approval, and then the NIH [National Institutes of Health] approached us to evaluate our solution through a multicenter longitudinal trial,” Azmon tells ISRAEL21c at Notal’s Tel Aviv headquarters.

The study was to follow dry AMD patients for three years – one group using ForeseeHome and the control group doing standard self-care and regular doctor visits – to determine whether use of the device would make a significant difference in vision at the end of that time.

One of the largest-ever ophthalmological studies, it enrolled 1,520 patients at 44 leading US medical centers. Results were studied halfway through and again 75 percent of the way through. Remarkably, the NIH halted the trial six months ahead of schedule because the benefit of the made-in-Israel system was already amply proven. 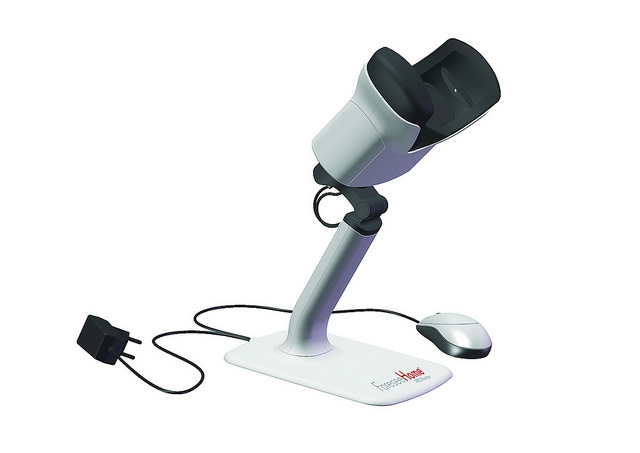 Early treatment is critical to saving eyesight, says Azmon, himself an ophthalmologist.

“We are marketing the product in the United States and working with Medicare on reimbursement,” he says. Europe is the next target; ForeseeHome already earned the European CE mark.

Inquiries from Asian countries are prompting Notal to investigate that market, though establishing a presence in each country requires setting up a patient-support infrastructure in the national language.

“We are a service company,” Azmon stresses. “We’re not selling devices.”

Azmon and fellow eye doctor Yair Alster spearheaded a physicians’ strike at Tel Aviv Medical Center in 2000. When negotiations were not to their satisfaction, they left the hospital to go into business together.

In April of that year, the FDA approved Visudyne, an injectable drug to treat wet AMD. “Before then, most AMD patients couldn’t do anything about it,” says Azmon. “We thought if there is a drug now, there should be way to diagnose wet AMD, so we developed a technology to monitor and diagnose it.”

There is no way to predict when and if someone will progress to wet AMD, and the sheer number of people with dry AMD makes it impossible for doctors to monitor each one on a weekly basis, let alone daily.

“So from day one, we thought we should bring a diagnostic method to the home,” says Azmon.

After developing a novel technology and protecting the intellectual property, they discovered it would be easier to break into the field with a large clinical device rather than a home model.

As ISRAEL21c reported in 2003, Notal Vision’s clinical unit was marketed through the major German conglomerate Carl Zeiss Meditec, and later was sold to Reichert Ophthalmic Instruments in Buffalo, New York.

That allowed the company – which is venture-funded in the portfolio of Elron Holdings – to focus on the home version.

The unit comes with a tutorial instructing the user to respond to a series of visual stimuli, using a patented visual acuity test developed by Notal – “a very sensitive way to monitor changes in vision,” explains Azmon.

“Out of these stimuli we are building a functional map of the retina and its performance. We compare that to a normative database we built, and also statistically to the patient’s own baseline, which can change over time.”

It goes without saying that other companies are working toward a similar solution, but at the moment there is nothing like ForeseeHome on the market.

Dr. Anat Loewenstein, head of ophthalmology at Tel Aviv Medical Center and a consultant to Notal, tells ISRAEL21c that the home monitoring system is “a huge technological development that can prevent blindness and be a way to preserve functional activity – such as driving and reading — in people with macular degeneration, the main reason for significant loss of vision in people over 50 in the Western world.”

Loewenstein calls ForeseeHome “a breakthrough invention” that she is eager to prescribe to patients with bilateral dry macular degeneration or one eye with dry and one with wet.

She feels the latter group will be especially motivated to use the device. “Even if they got treated in a timely manner in the wet AMD eye, they know that the earlier you catch it the better the results will be.”