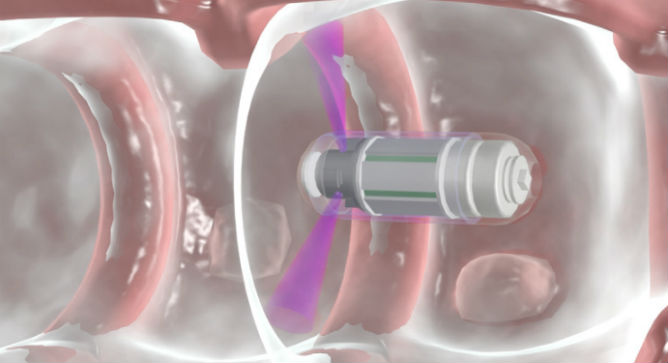 The Check-Cap capsule as it looks passing through the colon.

Only a few years ago it would have belonged to the realm of science fiction: A tiny capsule that travels through the intestines, snapping 360-degree X-ray images and continuously transmitting information to a wrist-worn data receiver reporting on the prevalence of polyps, the precursors of colorectal cancer.

Thanks to the ingenuity of Israel’s Check-Cap, all you’ll have to do is swallow a tiny capsule containing a miniaturized X-ray source and several imaging sensors. No colonoscopy, no hospital visit.

“Everyone over 50 should be regularly screened for colon cancer,” CEO Guy Neev tells ISRAEL21c, “yet too few people do so because the standard colonoscopy procedure is uncomfortable and invasive. Ingesting the capsule involves no preparation or discomfort, and patients can continue to go about their everyday lives — meaning that they are far more likely to take the test.”

With early screening, 90 percent of colorectal cancer cases are preventable, yet it’s the world’s fourth most common cancer killer, accounting for 8% of all cancer deaths, Neev points out, citing statistics from the International Agency for Research on Cancer. 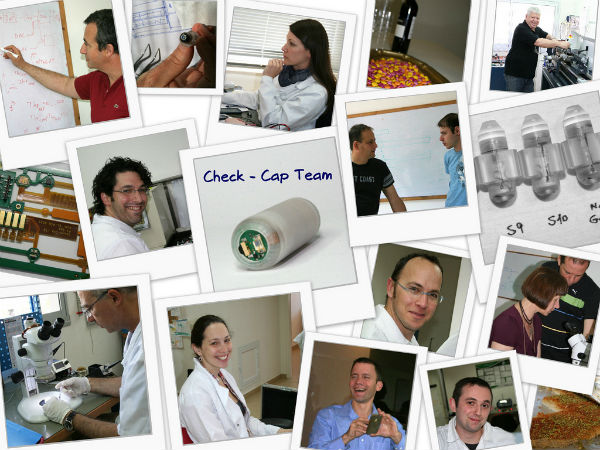 “Early detection saves lives. The potential market is enormous — some 36 million people a year in the Western world alone need screening annually. But most people prefer not to undergo colonoscopy, which explains the high mortality rate.”

X-rays spell the difference between Check-Cap and PillCam, the revolutionary imaging system pioneered about 10 years ago at Israel’s Given Imaging for visualizing and detecting abnormalities of the GI tract.

“While the currently available capsule endoscopies are based on cameras and therefore required aggressive bowel cleansing, the Check-Cap imaging capsule is the first device designed to work in the colon with virtually no bowel preparation because it employs low-energy X-ray which can see through the colon content,” Neev says.

“It operates at a low energy level, with minimal radiation – the equivalent of one regular X-ray, far less than a CT scan or mammography. This is because we are imaging the colon from inside, and there’s no need for the radiation to pass through other organs.”

Neev describes Check-Cap as a late-stage start-up that concentrates only on colon cancer.

“The company’s founder, Dr. Yoav Kimchy, came up with the idea in 2004 and started to work on the concept of imaging the colon from within,” he says. “We’ve used a multidisciplinary approach to miniaturize a novel imaging concept into a pill.”

Unusually for a biotechnology company, Check-Cap is based in Isfiya, an Arab Druze village in the Galilee.

“We’ve found it to be an inspiring place to work from,” says Neev. “It’s beautiful here on top of the Carmel Mountain. The view is magnificent. It’s close to Haifa, where the majority of our staff resides — most of our engineers are graduates of the Technion [Israel Institute of Technology]. Our R&D team includes one Druze with a PhD in chemistry.”

In its first investment in Israel, the GE Healthymagination fund — a $6 billion global initiative by General Electric to help deliver better healthcare to more people at a lower cost – has adopted the project. This equity investment fund focuses on identifying, partnering with and growing highly promising healthcare technology companies.

Neev says that the product is ready for the trial stage.

“Right now, we’re preparing to execute clinical studies. The miniaturization work has been completed. The clinical testing and validation lies ahead. We’ll use these clinical studies to fine-tune the technology and bring it to a commercial level,” he says.

“We plan to hold the first study in Israel during the coming few months. This clinical study in Israel will be followed by similar trials in European countries. The process in the US takes longer — we aim to submit the initial clinical results to the FDA in the second half of next year, and intend to begin clinical trials in the US soon after.”

Check-Cap intends to build an “atlas” of images to help medical specialists compare polyps. “We foresee that the level of expertise needed to read this data is so intuitive that a regular MD will soon be able to read it also,” he says.

Such a project demands considerable investment.

“We’ve gone through four rounds of capital raising,” Neev says. “The company is supported by venture capital and private equity firms in the US and Israel, plus some European firms.”