Itamar from Yeshivat Ma'aleh Gilboa and Denny from the Salesian Pontifical Institute getting acquainted at Faith and Ecology. Photo by Jonathan Hefetz

Itamar from Yeshivat Ma’aleh Gilboa and Denny from the Salesian Pontifical Institute getting acquainted at Faith and Ecology. Photo by Jonathan Hefetz

Despite simmering tensions in Jerusalem, Christian, Jewish and Muslim clergy and seminary students convened in the city recently around a shared vision of environmental stewardship at the Faith and Ecology Conference, each of them pledging a renewed commitment to integrating environmental education into faith-based teachings.

“Clergy members may very well hold the key to helping society shift its consciousness around climate change and environmental stewardship,” said Rachel Winner, project coordinator for the Interfaith Center for Sustainable Development, which organized the event with the Konrad Adenauer Foundation and the Salesian Pontifical University. “This conference aims to provide the tools and inspiration for religious leaders to catalyze that shift.”

More than 100 people attended the October 22nd meeting, which was part of the United Planet Faith and Science Initiative, a series of events taking place in Peru, New York and Jerusalem to coincide with UN climate-change talks.

The conference featured a panel presentation by local priests, rabbis and imams including Bishop William Shomali of the Latin Patriarchate of Jerusalem, Rabbi Yuval Cherlow of the Yeshivat Hesder in Petah Tikva, Member of Knesset Rabbi Dov Lipman and Dr. Nurit Hashimony Yaffe of the Academic College of Tel Aviv-Yaffo.

“Ecology unites the religions,” Shomali said. “We need to collaborate together — Christians, Muslims, Jews, Buddhists, and Hindus. If we speak together as religious leaders, our impact is really stronger.”

There were also interactive workshops, an outdoor session and a video message from senior religious leaders such as the Dalai Lama, Archbishop Desmond Tutu and Rabbi Lord Jonathan Sacks, former chief rabbi of the United Kingdom. 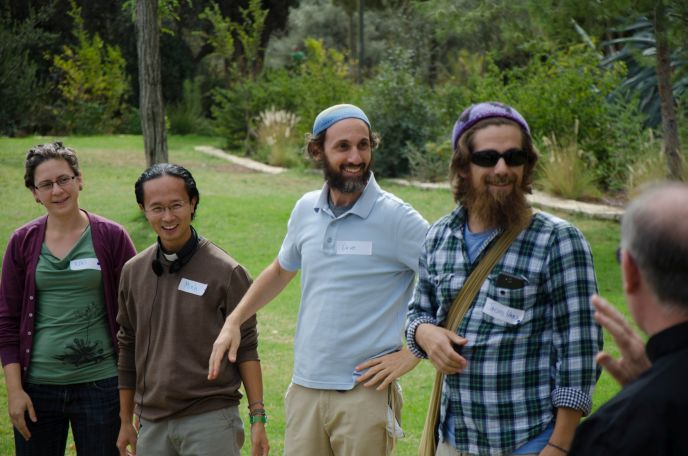 Rabbi Dave Mason, center, with students from Salesian Pontifical Institute and Hebrew Union College during the outdoor session of the conference. Photo by Jonathan Hefetz

The setting at the Mishkenot Sha’ananim Conference Center in the historic and pastoral Yemin Moshe neighborhood overlooking the Old City walls was particularly conducive to focusing on the environment, Winner tells ISRAEL21c.

During a “surprisingly powerful” outdoor session in the landscaped park adjacent to the conference center, groups of 30, four and two participated in awareness- and trust-building games. “I facilitated some of those sessions … and I was overwhelmed by the profundity of the responses,” says Winner. “They got everyone thinking differently.”

“The whole conference was designed to go from the big picture to small concrete action,” says Winner. “We started with a large panel and then breakout sessions for specific faiths, and each participant was able to attend two. After all that learning, we got together with our own faith communities and talked about what we can do. A representative from each group presented the inspiring results, and we’re hoping to facilitate continued meetings through our organization.”

One suggestion floated at these sessions inspired seminarians from the Salesian Pontifical University to state their intention to integrate environmental education into their youth programs, using some of the games they played in the outdoor session.

Others plan to organize cleanup days or promote “green” policies in their faith institutions, such as introducing steps to reduce their carbon footprint. Yasmin Barhum teaching a session on practical ecological applications of Islam to a group of Catholics, Jews and Muslims. Photo by Jonathan Hefetz

“We hope to start building partnerships between specific institutions for green initiatives in their locale,” says Winner. “That is something very new that will help dig into the next layer of environmental activism.”

Just half an hour after the conference concluded, an Arab terror attack in northern Jerusalem wounded a dozen people and killed a three-month-old Jewish baby. Another victim later died of her injuries.

“Coming after the beautiful and powerful dialogues we’d just had, it was really a reminder of where we are and the work that’s ahead of us,” says Winner. “The environment is a root cause and a significant victim of the conflict.”

Rabbi Michael Melchior, former Member of Knesset and co-founder of the Knesset environmental caucus, said that “the holy city of Jerusalem sometimes goes astray to points of violence, but really we can make it a gate to Heaven. The world really belongs to God, and all of us are temporary residents in this world, which we have been given to take care of.”