For 40 years running now, political cartoonist Yaakov “Dry Bones” Kirschen has been commenting on Israel and Israelis, society, culture, politics — local, regional and international — and anything else that deserves a poke in the side.

As creator of Israel’s longest-running comic strip, Kirschen was recognized for a lifetime of achievement by the Israel Cartoonists Association (ICA) at Animix, the Festival for Animation, Comics and Caricature which took place in Arad last week. 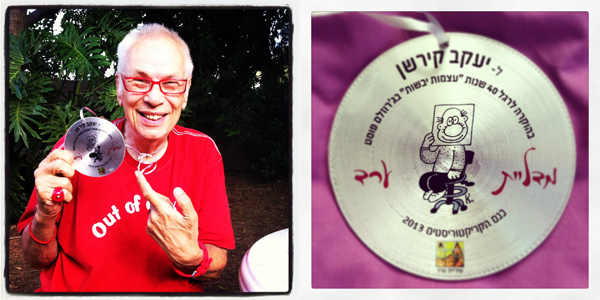 Another award, the Israel Museum of Caricature and Comics’ “Golden Pencil” was given to him earlier this year, closer to the actual 40th anniversary of his joining The Jerusalem Post on January 1, 1973.

Here’s a link to a story that includes Kirschen’s recollection of how he came to work at The Post under legendary editor Ted Lurie — and here’s that first cartoon:

And another cartoon, also from 1973. Things haven’t changed that much.

Kirschen, who is a personal friend, had nothing but praise for Animix, which he says gets better from year to year as a gathering place for artists engaged in all forms of cartooning, caricature, comics, graphic novelization and animation. A few days before the Festival, he published his his take on newspaper cartooning in today’s new media environment.

In addition to “Dry Bones”, Kirschen is working on a variety of projects including The Dry Bones Blog where he posts current cartoons and beloved Golden Oldies, the Dry Bones Project, an educational outreach effort that is producing comic books about Israel and Jewish nationhood for the Chinese market, as well as Secret Codes, Hidden War, a study conducted by Kirschen while he was Artist in Residence at the Yale Initiative for the Interdisciplinary Study of Antisemitism that examined the role of political cartoons in promulgating new antisemitic memes.

There is also the Dry Bones Haggadah — the first draft of which was funded successfully on Kickstarter — which he envisions as becoming a Passover household staple and family favorite.