How – and why – a Canadian Jewish community is bringing this fast-growing team water sport to the Sea of Galilee.

Each boat holds 20-22 paired paddlers, a drummer and someone who steers.

Israelis are about to be exposed to the fastest-growing water sport in the world: dragon boat racing. The “ultimate team sport” will make its debut at the country’s first Dragon Boat Festival on Lake Kinneret (the Sea of Galilee) on May 17-18 next year.

“It will be a novelty. It’s not just about the race — because it will be international, it will be a fun two days,” the event’s founder, Debbie Halton Weiss, tells ISRAEL21c in a telephone interview from Canada. “The idea is to bring people to Israel in a different way.”

Halton Weiss, chair of the Jewish Federation of Ottawa, had been searching for a novel, team-oriented activity to inspire greater group participation. Once she learned about dragon racing, it seemed to her a perfect fit.

“I realized that this is the type of activity we’re looking for. It’s fun, helps build teamwork and cooperation, and brings people together. I sent out an e-mail to members of our community. The response was immediate and brought in lots of our young leadership.”

Out of this grew a motley crew of community members, named the Sea Lions, who entered the 2009 Ottawa Dragon Boat Festival to raise money for a local charity.

“The Ottowa festival had 195 teams – it’s one of the largest festivals of its type in the world. At that first festival we finished second in cheerleading and third in fundraising. We didn’t do so well on the water, but we didn’t care. It was a wonderful community activity,” she recalls.

“That’s when we started to think about bringing it to Israel. Many dragon boat races are already held in the Middle East, in places like Cairo, Beirut, Dubai and Teheran, but not in Israel. So we decided to create one.” 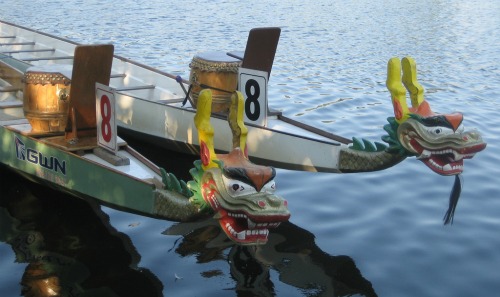 Traditionally made of teak and adorned with decorative Chinese dragonheads and tails, the boats hold 20 to 22 paired paddlers, a drummer at the bow facing the paddlers and a sweep, or steerer, at the rear. The pulsating drumbeats produced by the drummer, to which the paddlers synchronize their strokes, provide the boat’s “heartbeat.”

Victor Yagoda, director of projects and infrastructures at the United Israel Appeal of Canada, joined the Sea Lions at the dragon boat festival.

“I first heard about this from Debbie, who told me of the plan, so I began to surf the web — and frankly, I got hooked immediately,” he says. “I also feel that when I talk to people about this, they understand and want to join us.”

It’s no simple task to organize an unprecedented event.

“We created an executive which created a business plan,” explains Halton Weiss, chair of Dragon Boat Israel. “I traveled to Israel, raised seed money, hired a project manager in Israel and linked with an Israeli tour operator. We’ve entered partnerships with local councils, who gave us their support from the outset.”

Back in Canada, there was plenty of behind-the-scenes work to be done. “We started a national recruitment drive, working with federations across the country. I see it as a way to partner with Israel, promote tourism to the north and hold a charity event.”

The plan is to register a minimum of 20 and maximum of 40 teams, half of them from Israel and half from North America. “This is for everybody – from 8 to 80s,” Halton Weiss stresses. Three or four teams of breast cancer survivors have come on board as well.

Israelis will be recruited from Partnership 2000, the military, rowing clubs, colleges, industries and youth-at-risk organizations. Joint Jewish-Arab teams, families, people with special needs, members of kibutzim and moshavim, cancer survivors and any other specialized team is welcome to participate.

“We are purchasing six boats as a present to the area, to help develop the sport in Israel,” she says. “They’ll be there in November. We’ll also bring some professional people and coaches.”

The philanthropic aspects of the event are equally important, with proceeds earmarked for Israeli children at risk. The paddlers will ask friends and family to sponsor them.

Meanwhile, Halton Weiss is still buzzing from the Ottowa festival, where her team finished first in the “spirit” category. “We had a tent [publicizing the event in Israel], and as all the teams came to the shoreline they went past our tent. There was so much interest — a group of police officers approached me and asked if they can paddle together with Israeli police officers. It’s opening up a while new sphere of cooperation. It’s very exciting.”