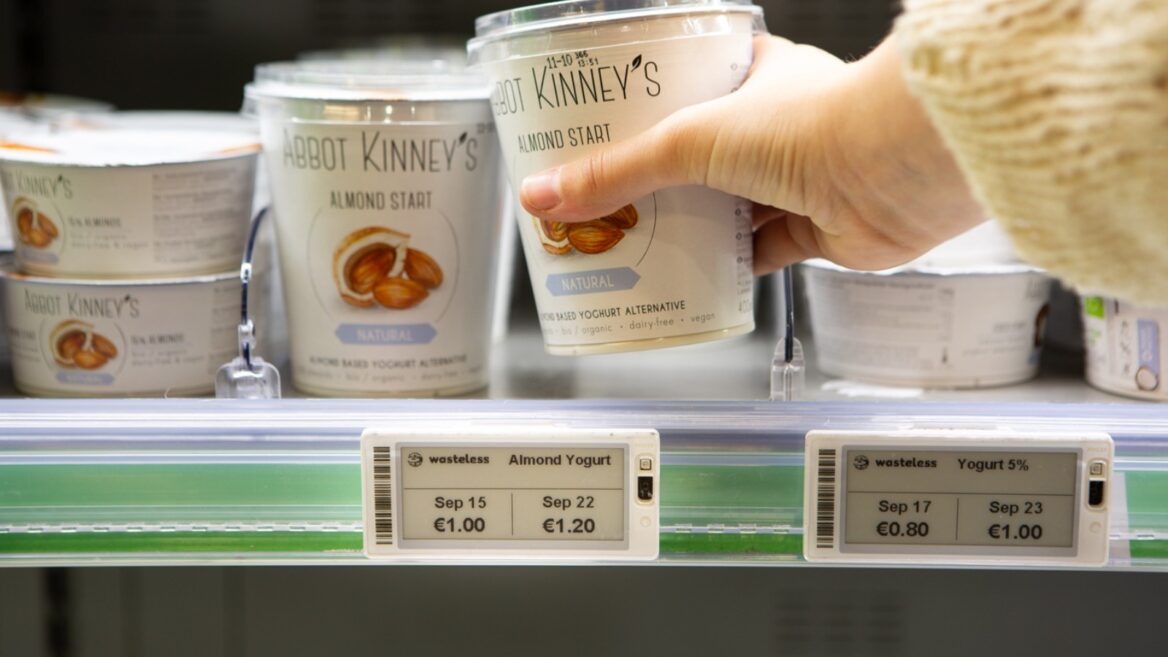 In the cult science fiction/comedy film, Bill and Ted’s Excellent Adventure, the eponymous time-traveling protagonists are charged with writing a song to unite the world and save humanity.

Israeli tech entrepreneur Oded Omer may have had the same mission in mind when he set out on a music career.

The virtuoso bass guitar player from Holon received a scholarship to Berklee College of Music in Boston and even performed across Israel. But Omer ultimately became a serial entrepreneur with an engineering degree from Tel Aviv University and an MBA from the Holon Institute of Technology. 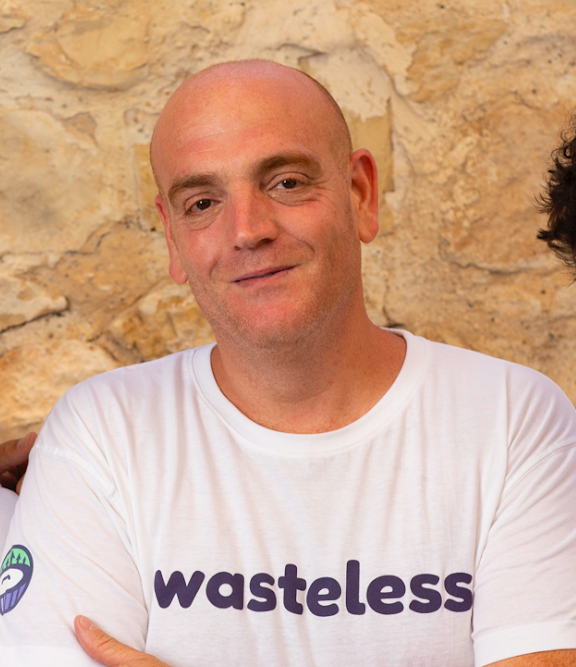 His passion for making the world a better place – Bill and Ted style – eventually came to focus on how food waste impacts climate change.

Food waste is the world’s third-largest contributor to greenhouse gases, Omer tells ISRAEL21c, with a third of all food produced globally never reaching our plates. (No. 1 is refrigeration, No. 2 is fossil fuels.)

For an average-sized retail chain with $30 billion in annual sales, food waste costs some $900 million a year. For one retailer with $70 billion in sales, Omer reports $1.4 billion in expiration date-based waste.

In the European Union, Omer calculates that 2.5% to 4% of a retailer’s annual turnover “is literally being thrown away. In the US, it’s touching 5.5%. Germany does the best in terms of waste management.”

What if technology could reduce food waste by 30 percent or more? By using state-of-the-art artificial intelligence, that number could rise as high as 80% while boosting revenue by an average of 6%.

That’s a song that might just unite the world and it comes from Tel Aviv-based Wasteless, Omer’s latest startup.

Wasteless software updates electronic shelf labels (ESLs) so that the price changes based on a product’s expiration date. 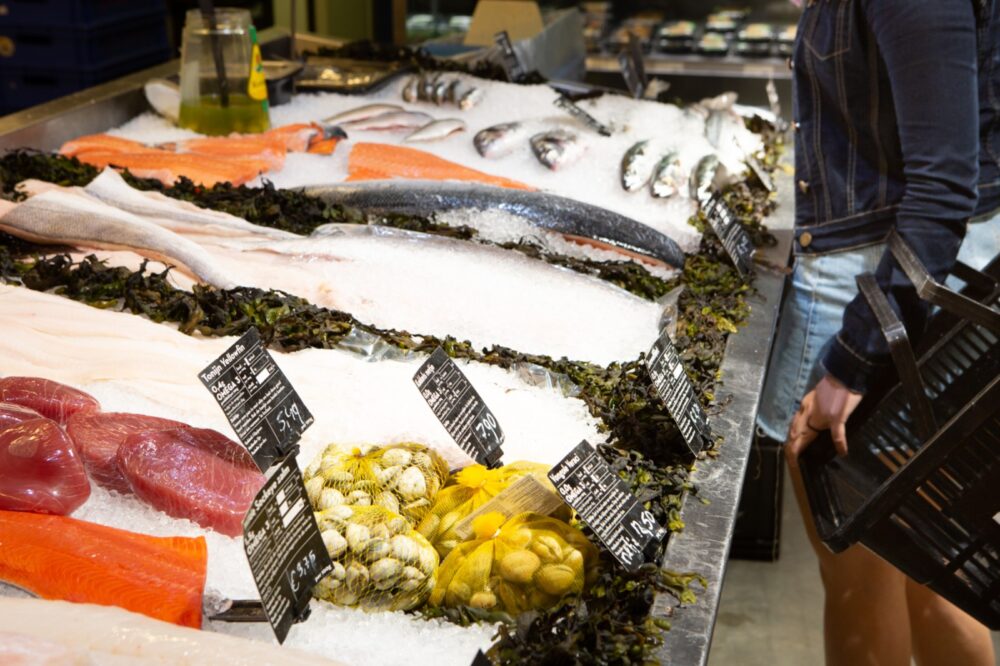 The closer the fish gets to its expiration date, the less it costs. Photo courtesy of Wasteless

“I was standing next to a wall of cottage cheese, and I thought, it doesn’t make sense to pay the same price for a cheese that expires in two days compared with one that expires in seven days,” Omer says.

The price is reduced little by little as the expiration date approaches.

“Let’s say that a store has ten packages of chicken thighs,” Omer explains. “They might sell seven and throw away three. On the last day, they offer a 40% markdown. We say: Don’t wait. Start with a 2% markdown six days before the expiration date. Then drop it another 7% or 11%. That way you’ll never reach 40% only on the last day. The product will sell well before the expiration date.”

A processed food with a long expiration date wouldn’t be a good candidate for a dynamic price reduction. But for products like fresh meat, fish, dairy or prepared salads, Wasteless is ideal. 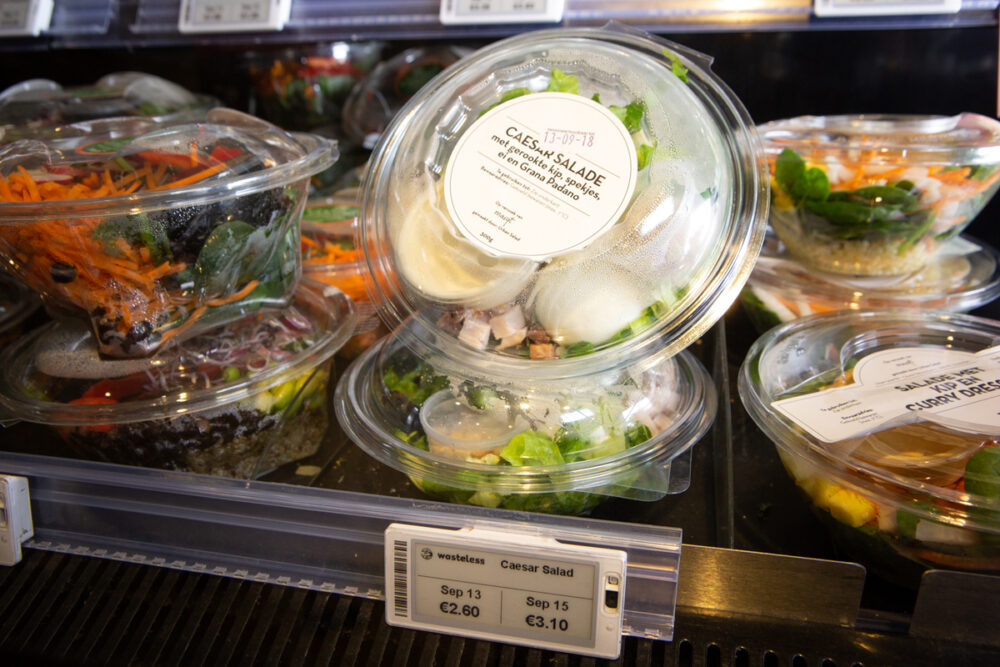 Prepared foods like salads are ideal for the Wasteless system. Photo courtesy of Wasteless

Omer says that tests with a retailer in Spain resulted in a 32.75% decrease in waste combined with a boost in revenue of 6.3%.

“We need to find the common point between two mathematical functions: to give incentives to the consumer to buy without harming the retailer’s revenue stream.” 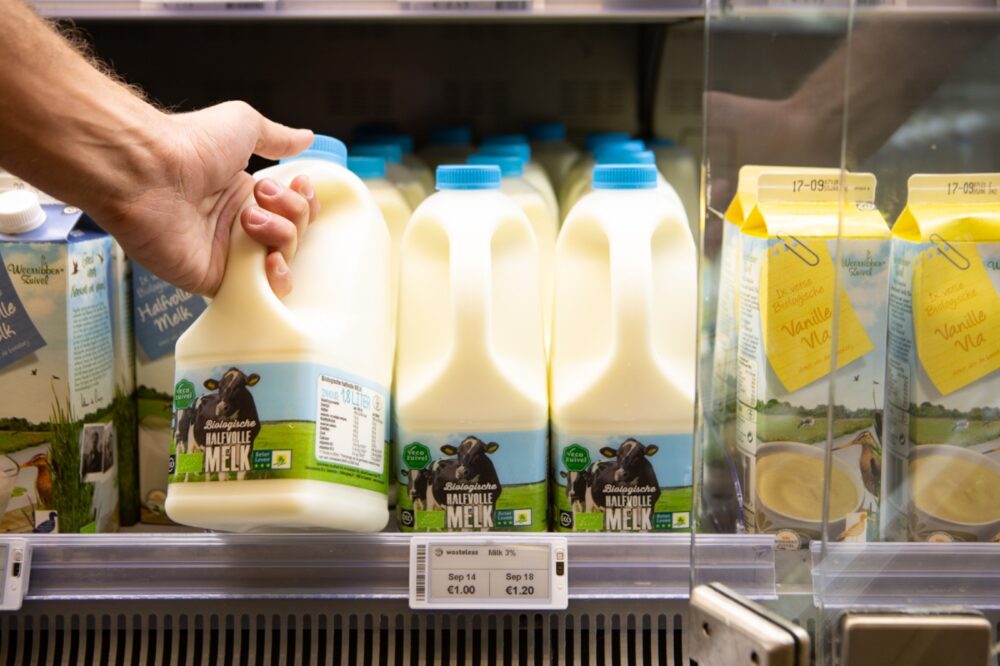 Customers can see the original and marked-down price. Photo courtesy of Wasteless

How does the Wasteless system know when a product will expire and what price to assign?

That’s where AI comes in, tracking how consumers respond to dynamic pricing so a retailer can find the perfect discount: If a product is marked down 10% for two days and doesn’t sell, the AI will make deeper markdowns until the product starts moving, and will learn from that history.

The electronic shelf labels display both the original price and the markdown, so consumers can see how much they’re saving. Prices are updated no more than two to four times a day to avoid causing customer confusion.

Wasteless can work in any stores using a 13-digit barcode that includes the expiration date. (Traditional 10-digit barcodes don’t have this appendage.) The 13-digit barcode is becoming more common in the US – the Whole Foods and Publix chains use it.

The barcode is uploaded to the store’s product database, which links it with both the point-of-sale system (that is, the cash registers) and the electronic shelf labels, which connect wirelessly.

What about online grocery shoppers? How can they see dynamically updating electronic shelf labels? No problem: Wasteless has an app for mobile phones. Customers can benefit from dynamic pricing on their mobile phones, too. Photo courtesy of Wasteless

The idea for dynamic pricing came from another startup Omer worked at – Weissbeerger, where the Wasteless CEO served as CTO.

Weissbeerger attaches monitors to beer taps to track how much alcohol is being poured in a bar or restaurant, allowing for a precise pay-for-what-you-drink approach. A Weissbeerger dispenser can even be placed at the customer’s table, eliminating the need for interaction with the wait staff.

Weissbeerger was sold to Anheuser-Busch InBev for $80 million in 2018. “I was very proud but decided not to stay on after the acquisition,” Omer explains. “I wanted to start another company.”

That company, Wasteless, has now raised $7 million and has 20 on staff in three offices: Tel Aviv (headquarters), Amsterdam and San Diego (where part of the R&D is being conducted).

Omer says he knew he was on to something while shopping in California. He noticed that the seafood was marked down 60% as the expiration date drew close.

“How many of these will you sell?” Omer asked the clerk.

Wasteless’s first commercial deployment was in 2019 with an Italian supermarket chain. Not only was waste reduced nearly 40%, but revenue increased by the same amount.

“That’s insane in an industry which enjoys margins of just 1%,” Omer says.

Wasteless has four signed customers including the METRO chain in Europe, which is launching the service at its Makro stores in Poland.

“In 2016, we committed to halving food waste in our own operations by 2025,” says Veronika Pountcheva, global director of corporate responsibility at METRO AG.

Wasteless is working with NX-Food, a food-tech incubator, and food innovation platform EIT Food to bring its platform to retailers across Europe.

Omer’s work keeps him busy, but he still finds time to play the bass.

“We have jam sessions every few days or so,” he says. “All the musicians who come are also startup entrepreneurs. My partner at Wasteless plays guitar. Our head of science is a pianist. We play everything: rock, pop, garage.”

Now all he needs to do is write the song – or the software – that unites the world and saves humanity. Bill and Ted will thank you.