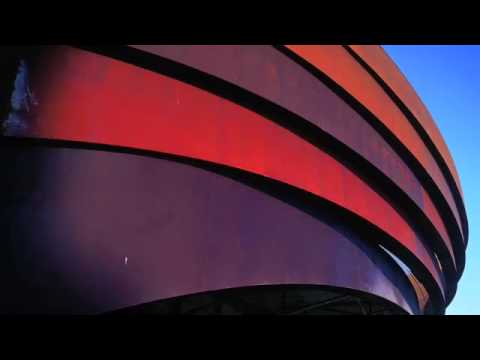 The Design Museum of Holon will be the first museum for contemporary design in Israel and one of just a few in the world. Created by internationally renowned Israeli architect Ron Arad, the building itself is a work of art.

Created by Israeli Ron Arad, the Design Museum of Holon is the internationally renowned designer’s first-ever commercial development and his first project in Israel.

The steel bands of the Design Museum are made of 350 tons of steel and designed to emulate the movement of ribbons.

On a visit to inspect progress, Arad reveals that even he is surprised by aspects of the building, which looks different at different times of day as it frames the sky through a series of bands that emulate the movement of ribbons, despite being made of 350 tons of steel.

The goal of the project is to project beyond the boundaries of Israel and create a platform from which to further the discussion of design both by projecting it outward and drawing international contemporary design into the country.

The State of Things, the first exhibit, will open go display when the museum opens to the public in March. It will feature more than 100 objects reflecting issues of contemporary international design.

Built entirely with public funds, the museum is the latest in a series to be built in Holon over the past decade. Aspiring to be a hub of cultural life in Israel, the central city, nearby Tel Aviv, already has a children’s museum, a digital arts center, a puppet museum and a museum of comics and caricatures.