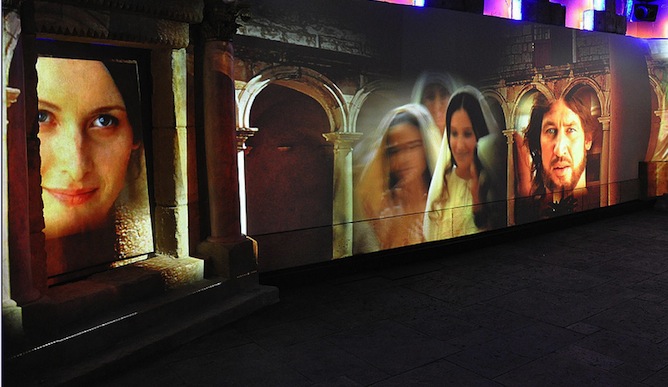 Sound and light show at the Mary of Nazareth International Center. Photo courtesy of the Tourism Ministry

Did you know that the majority of tourists to the Jewish state are not Jewish but Christian? In 2012, nearly 60 percent of the 2.88 million visitors to Israel were Christians, and about a third of those were pilgrims come to visit holy sites.

This Christmas season, two major, privately funded innovations are being promoted by the Israeli Tourism Ministry, which is putting increasing resources into existing and new Christian tourist sites.

The International Center Mary of Nazareth, located next to the Roman Catholic Basilica of the Annunciation, is run by an ecumenical French Catholic community with the aim of creating unity among Christians of different denominations and with other religions through the example of the Virgin Mary. 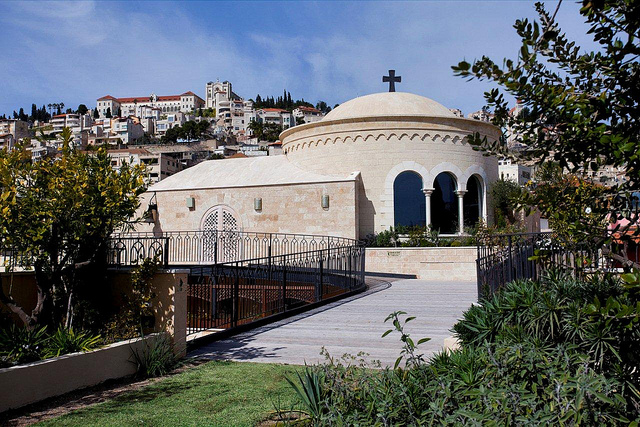 Chapel at the Mary Center. Photo courtesy of the Tourism Ministry

“In order for there to be peace with others, we have to make peace among ourselves,” explains the center’s Sister Beatrice Bourrat to ISRAEL21c, when asked about the current mass persecution of Christians in the Arab-Muslim world.

The center combines the qualities of a museum – tours of the grounds, sound-and-light shows and a souvenir shop – with those of a prayer hall, a conference venue and a restaurant serving non-kosher food cooked by a French chef, but influenced by the traditional Middle Eastern fare of Nazareth, Israel’s largest Arab city.

The other project is the Magdala Center. As its name suggests, this center celebrates a different Mary – Mary Magdalene — the second-most important woman in Christian Scriptures, who is believed to have been with Jesus during both the crucifixion and the resurrection. 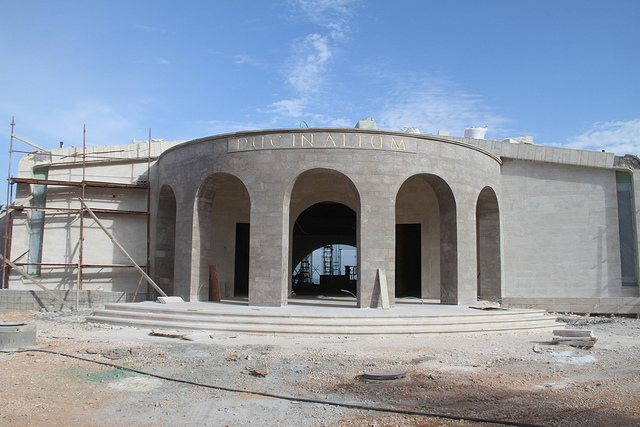 The auditorium of the Madgala Center is not yet completed. Photo courtesy of the Tourism Ministry

Located on the western shore of the Sea of Galilee (Lake Kinneret), in the ancient port of what is known in Hebrew as “Migdal,” and in Aramaic as “Magdala,” this pilgrim center has been under construction since 2005 and is run by Fr. Juan Maria Solana. Solana is a member of the Legionaries of Christ, a Mexican congregation of priests whose mission is “to work together with bishops, priests and all Christians in the task of the New Evangelization.”

An extension of the Pontifical Institute of Notre Dame in Jerusalem, the Magdala Center aims “to offer a total holy experience in a real pilgrimage at the unique holy biblical place in the Holy Land.”

A hotel is being built, as well as an archaeological park where findings include a first century synagogue from the time of Jesus, and natural spring mikvaot (ritual baths). One can already see the final touches of the Duc in Altum Spirituality Center.

Time for women to be given their due

Duc in Altum (“put out into the deep”), a Latin phrase used by the late Pope John Paul II to encourage his flock that with God’s help, anything is possible, comes from the Gospel of Luke (5:2-6): “While the crowd was pressing in on Jesus and listening to the word of God, he was standing by the Lake of Gennesaret (Kinneret). … [H]e said to Simon, ‘Put out into deep water and lower your nets for a catch.’ Simon said in reply, ‘Master, we have worked hard all night and have caught nothing, but at your command I will lower the nets.’ When they had done this, they caught a great number of fish and their nets were tearing.”

In this grand, circular structure surrounded by massive windows, the saying “Duc in Altum” is painted, banner-like, around its inner walls. A spectacular view of the Kinneret is seen through the large windows behind the altar, which is shaped like a boat.

The center is situated at the ancient fishing village where Jesus’ most loyal follower, Mary Magdalene, is said to have lived. It is in her honor that the adjacent Magdalena Institute for Women is being established.

Solana tells ISRAEL21c: “It’s about time for women to be given their proper due.” He says that whenever men are asked to name the most important or influential person in their lives, the answer is almost always a woman – usually their mother or a teacher. “Not their wives, though,” he laughs.

It is not only the role of women in the Bible that Solana points to, however, as the reason for paying tribute to their contribution. “The vast majority of pilgrims who come to Israel are women,” he explains. “All you have to do is look at a group of Christian pilgrims to the Holy Land and it is obvious.” 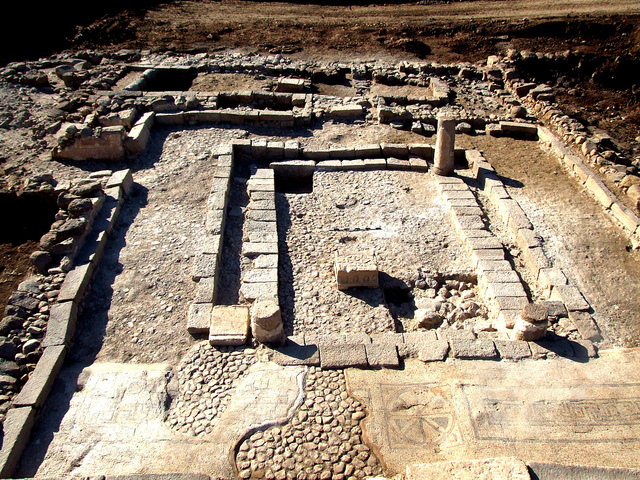 Site of an ancient synagogue at the Magdala Center. Photo courtesy of the Tourism Ministry

This Christmas season, an estimated 25,000 Christians from all over the world are heading to Israel to visit the holy sites of the Bible, while enjoying the historical and modern sights of the country as tourists.

One of the newer attractions is the Gospel Trail, a 62-kilometer (38.5-mile) path from Nazareth to the Sea of Galilee. Launched by the Tourism Ministry in November 2011, it provides the opportunity to “follow in the footsteps of Jesus” – walking, cycling or on horseback. Some parts of the trail are wheelchair and stroller accessible.

The trail cost the government $600,000, a fraction of the NIS 86 million (approximately $2.5 million) that the Tourism Ministry has invested over the last few years to make Israel as pilgrim-friendly as possible.

This Christmas, from noon on December 24 and for the next 24 hours non-stop, free transportation will be offered between Jerusalem and Bethlehem, from the Mar Elias Monastery to the Church of the Nativity and back again. Tourism Ministry representatives will greet visitors at Rachel’s Crossing and present them with holiday mementos.