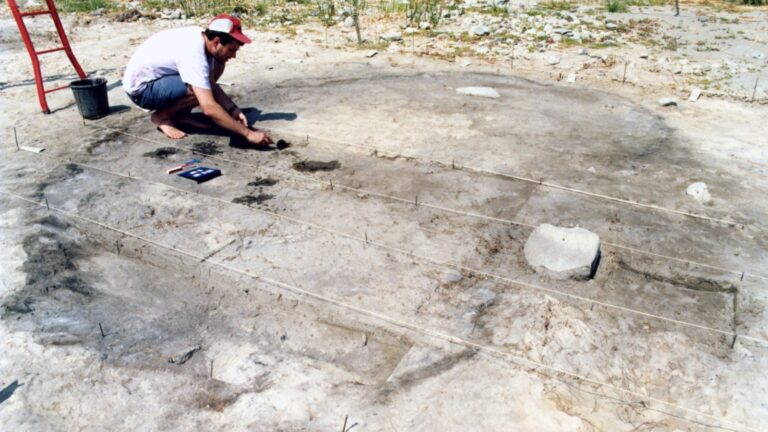 cap 2. Excavation of a brush hut’s upper floor at Ohalo II near the Sea of Galilee. Photo by Dani Nadel/University of Haifa

Remains of a previously submerged fisher-hunter-gatherer camp by the Sea of Galilee from around 23,000 years ago show that these Ice Age residents thrived whereas people in other parts of the world nearly starved in the extreme cold.

The archeological study of the Ohalo II site, led by Hebrew University doctoral student Tikvah Steiner under the supervision of HU Prof. Rivka Rabinovich and University of Haifa archeologist Prof. Dani Nadel, was published in PLOS ONE.

Dating from the end of the last Ice Age (“Last Glacial Maximum”), between 22,500 and 23,500 years ago, Ohalo II was discovered in 1989, following a drought that significantly lowered the water level of the Sea of Galilee.

The site contains the remains of six oval-shaped brush huts, open-air hearths, the grave of an adult male, and refuse heaps.

From a close analysis of 22,000 animal bones found at the site, including gazelles, deer, hares and foxes, as well previous documentation of charred plant remains, flint tools and cereal grains, the team concluded that Ohalo II residents enjoyed a rich diversity of food sources. They believe the Last Glacial Maximum had minimal effects on the Upper Jordan Valley.

“Despite their ability to hunt large animals, these inhabitants also hunted a wide range of prey and had tools and time enough to fully exploit animal carcasses down to the marrow,” said Steiner.

“Tortoises were seemingly selected for a specific body-size, which may suggest that their shells for use as bowls — and not their meat — were the main target,” she added.

Rebecca Biton, a postdoctoral student at Hebrew University in herpetology, discovered that the turtles were of a uniform size, which might indicate a conscious selection by the hunters for a specific size of turtle shell.

UNCOVER ISRAEL - Get the ISRAEL21c
Weekly Edition free by email
Sign Up Now!
Bring Israel's story to life.
Millions of people around the world rely on us to gain a deeper understanding of Israel. We are the trusted source for original content you won't find anywhere else.
You can make a difference. Donate today to support journalism that brings Israel’s story alive.
SUPPORT ISRAEL21c
Read more on:   News, Archeology, Culture, Sea of Galilee