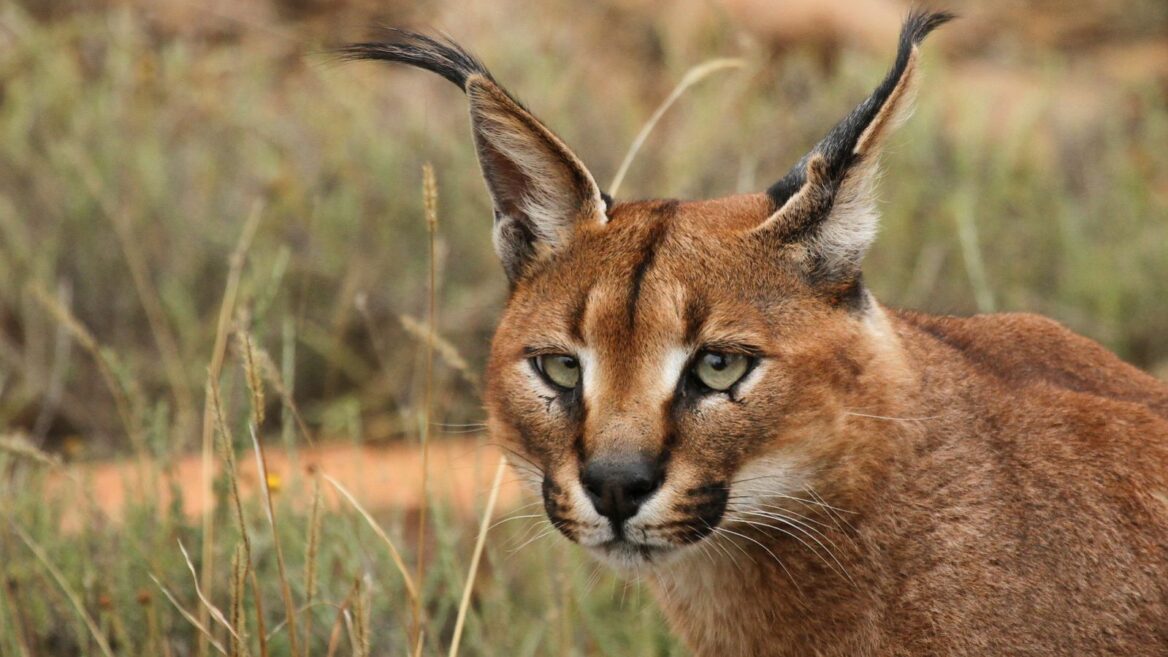 Caracals are among Israel’s most interesting and unusual wildlife. Photo by Leo za1/Wikimedia Commons

Remember nature? That nice, wild, outdoor concept that once upon a time we used to visit, admire and litter no end? Well, it’s still there, and probably doing all the better now that humanity isn’t out and about destroying it.

The same could probably be said for its inhabitants that are now freely roaming their environment, undisturbed by pesky people. And while they don’t miss us, we certainly miss them – the cute, unusual and above all outdoorsy wild animals of Israel – but for the time being will have to make do with sighting them through our computer screens. 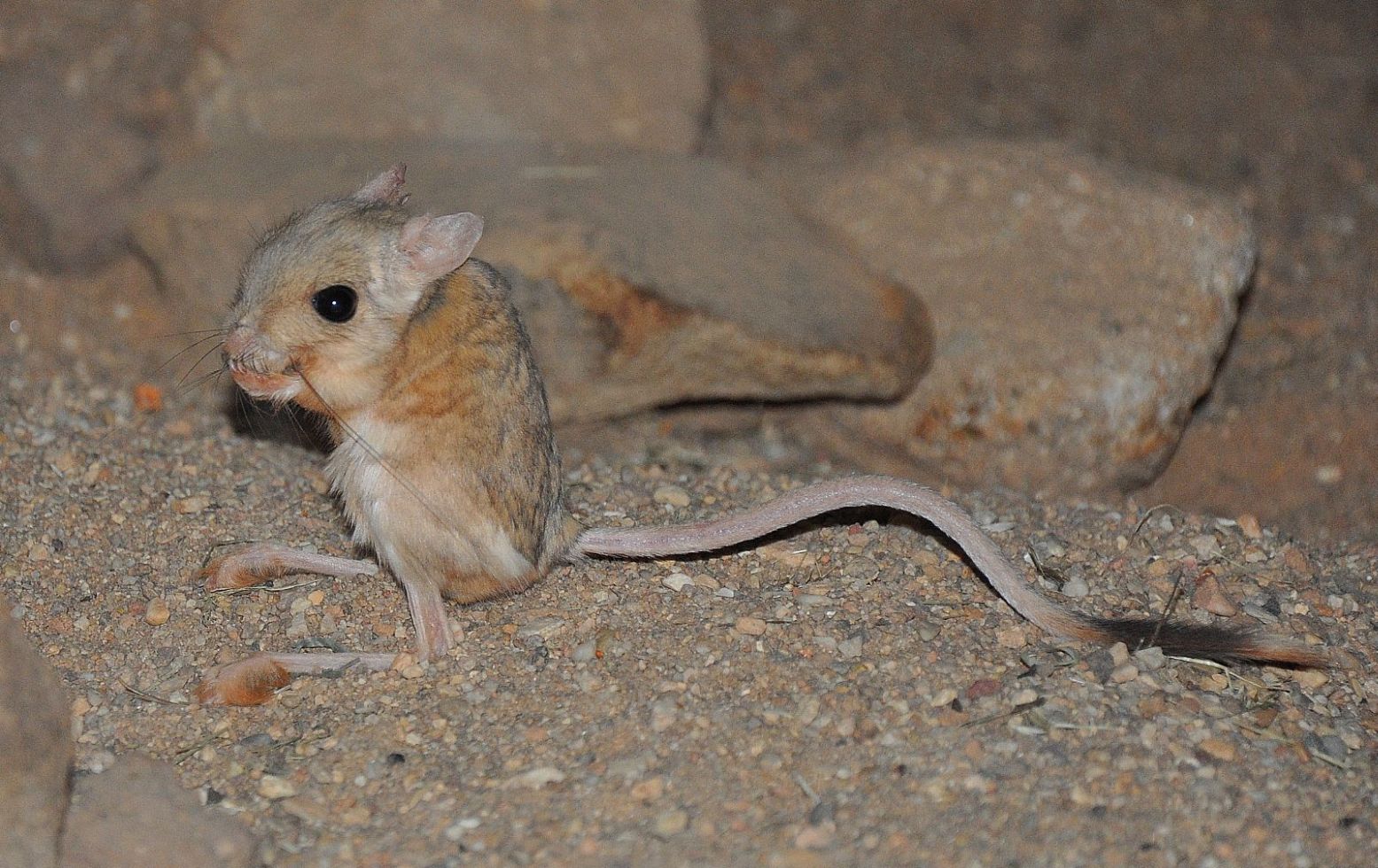 Is it a kangaroo? Is it a gerbil? No, it’s a Jaculus, or a lesser Egyptian jerboa – a small, hopping rodent found in the deserts of the Middle East and Africa, Israel included.

The tiny rodent is a nocturnal, solitary animal that has incredible senses of smell, sight and hearing, making it super-aware of everything in its environment. It also has long kangaroo-like feet that enable it to leap almost 10 feet at a time and cover vast distances in its search of food.

In Israel, lesser Egyptian jerboas are dwindling because construction is minimizing their natural habitat and because cats living on the edges of town and cities are out hunting them, making them a protected species. 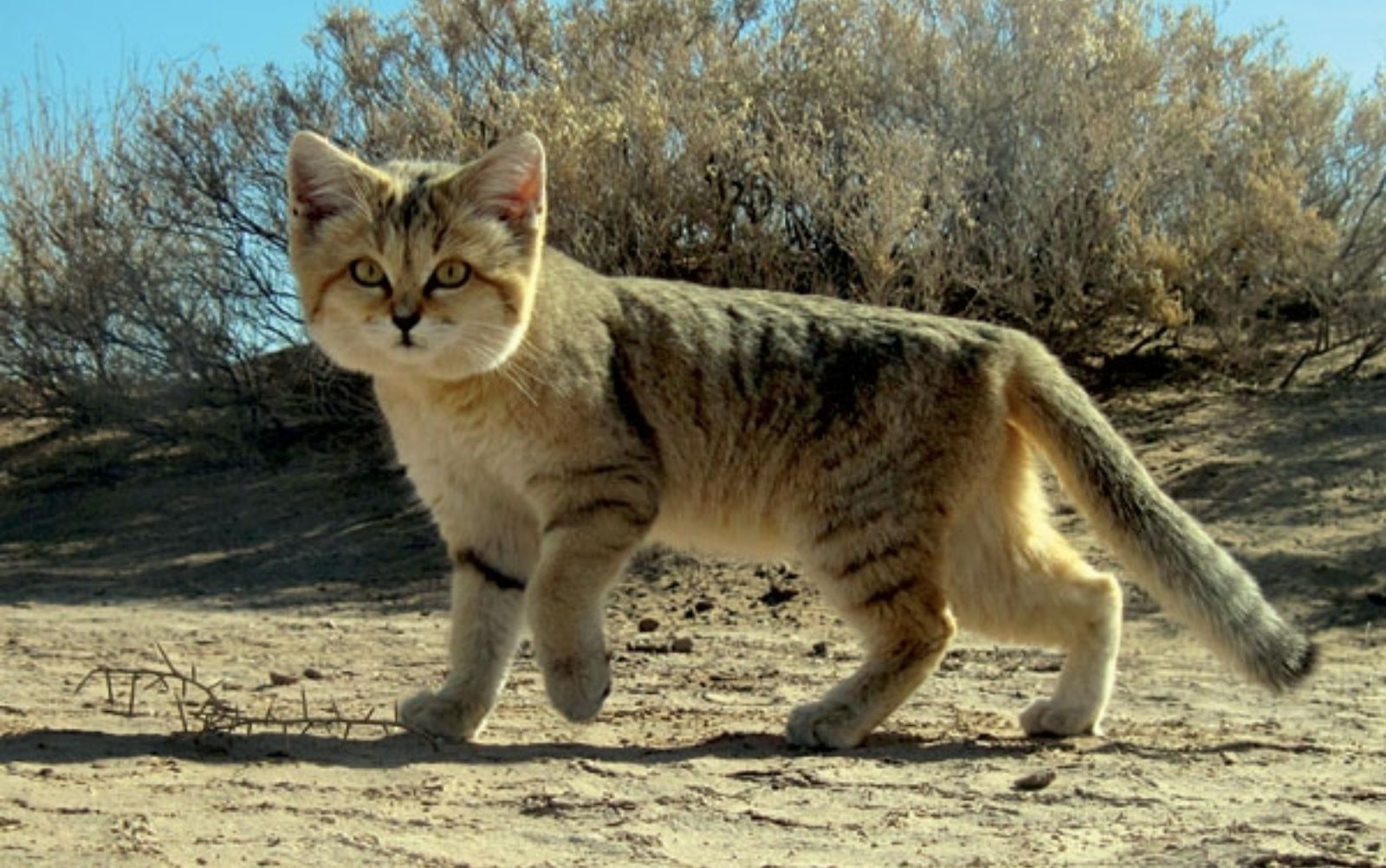 What looks like a fluffy kitten is in fact a completely wild animal most at home in sandy dunes and stony deserts across Africa and Asia.

Much smaller than domesticated cats, sand cats are solitary, nocturnal animals that spend their days hiding and going out at night to hunt their prey, which includes rodents, insects and lizards. Their pale, sandy coat helps them blend in with their surroundings, and fur on their feet helps protect them against the hot terrain.

No sand cats have been spotted in recent years in Israel, perhaps indicating that they have become extinct in the area, with the possible explanation that they were pushed out of their environment by larger canines such as large numbers of foxes. Let’s hope not. 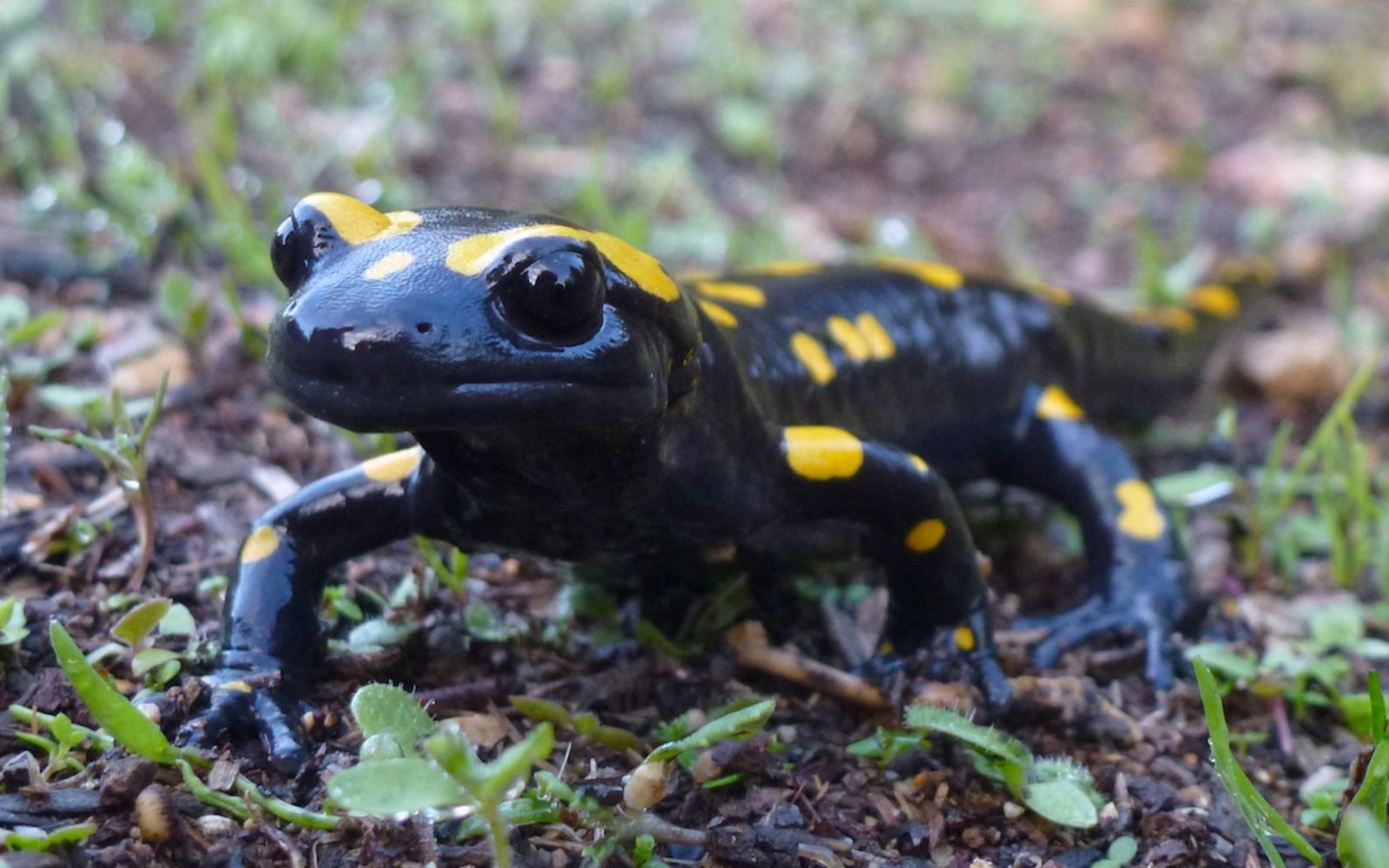 The Near Eastern fire salamander can be found in Israel, Syria, Lebanon, Iran and Iraq. In Israel, it lives up north in the Carmel and Galilee regions, and is considered an endangered, protected species.

Fire salamanders are black with a pattern of yellow or orange spots on their back that is unique to each individual animal. Two venom glands on the back of their necks emit poison.

In the past, they were believed to be born in fires and to carry bad omens, but in fact they require a wet and moist environment to grow and prosper. They don’t bring any ill luck to anyone at all, save the small insects that they devour. 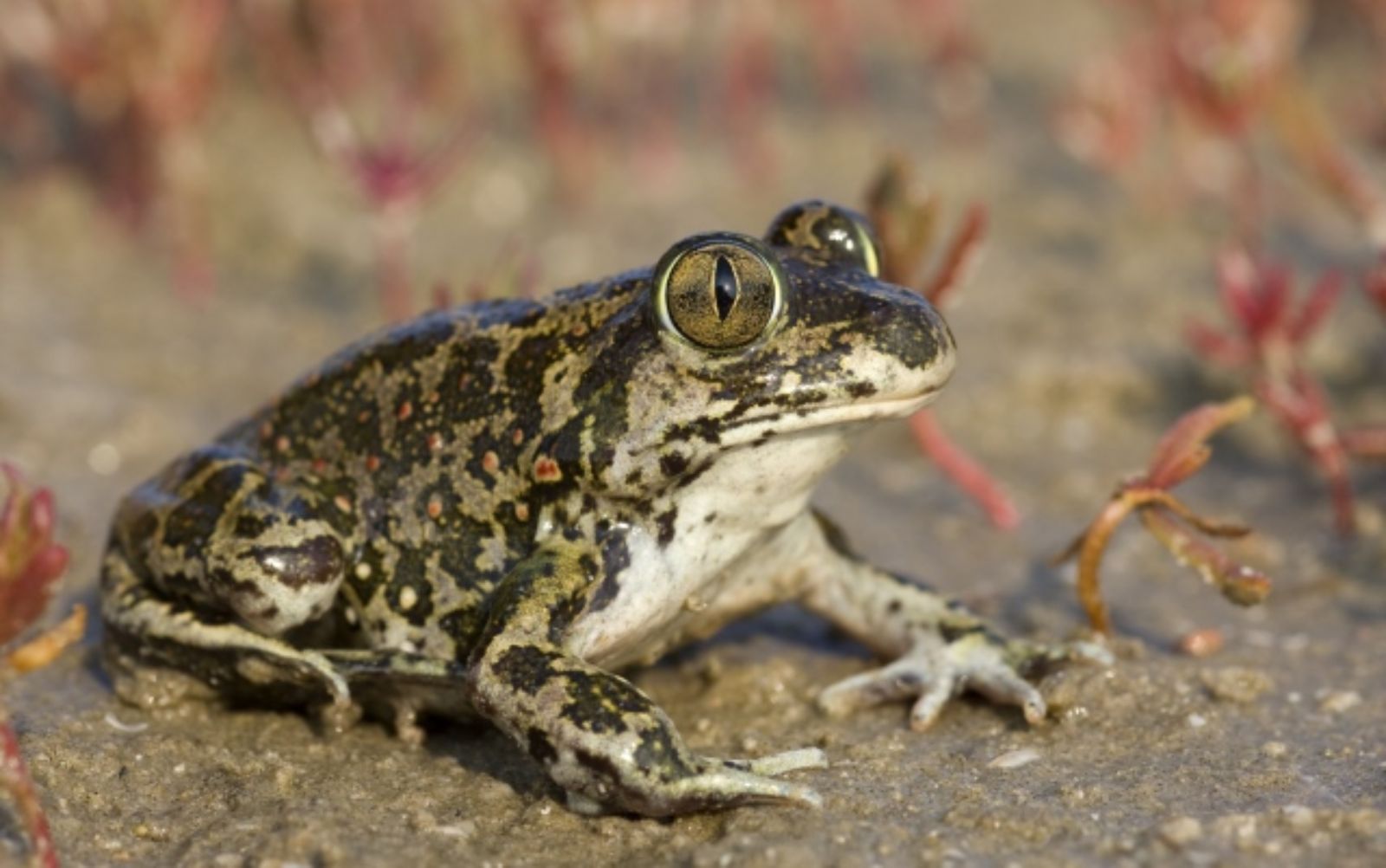 Plump, shiny and with big bulging eyes, the Syrian spadefoot is probably as cute as a toad can get. Its natural habitat spans Eastern Europe to Western Asia, with Israel being the southernmost place you’ll find it.

Syrian spadefoots were first recorded in Israel at the end of the 19th century, and over the decades their numbers have been decreasing – nowadays, a few hundred individuals. According to the Society for the Protection of Nature in Israel, their preservation could be aided by protecting existing winter pools from drainage and pollution as well as creating artificial ones.

Like many of their wild compatriots, these toads are nocturnal animals that hunt at night and spend the scorching hot days deep inside a burrow, sometimes even aestivating (like hibernating, only in summer). Which, to be honest, is our current state of being. 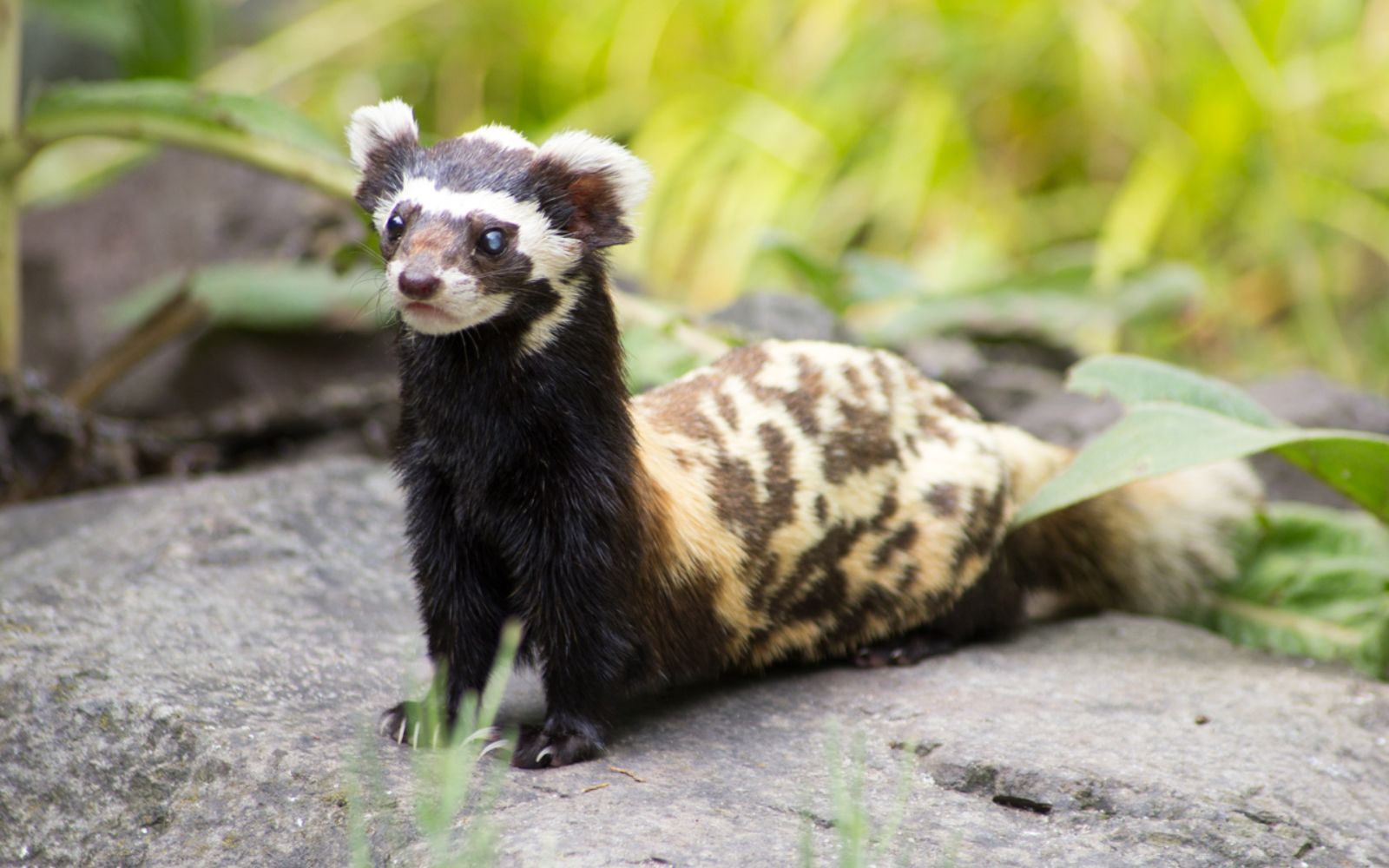 Not to be confused with a skunk (although they too emit a strong smell when threatened), marbled polecats are little hunters with poor eyesight and a good sense of smell.

They can be found from southeast Europe all the way to China, and in Israel they were first spotted in the early 20th century in the Jerusalem and Dead Sea areas. They have since made their way farther south into the desert, probably following the spread of agriculture to those once-arid areas.

The number of marbled polecats in Israel is unknown, and they are difficult to trap or observe in their natural habitat. They are mostly active in the mornings and evenings and don’t sleep in the same place twice, instead each night seeking a new place to lay their heads. 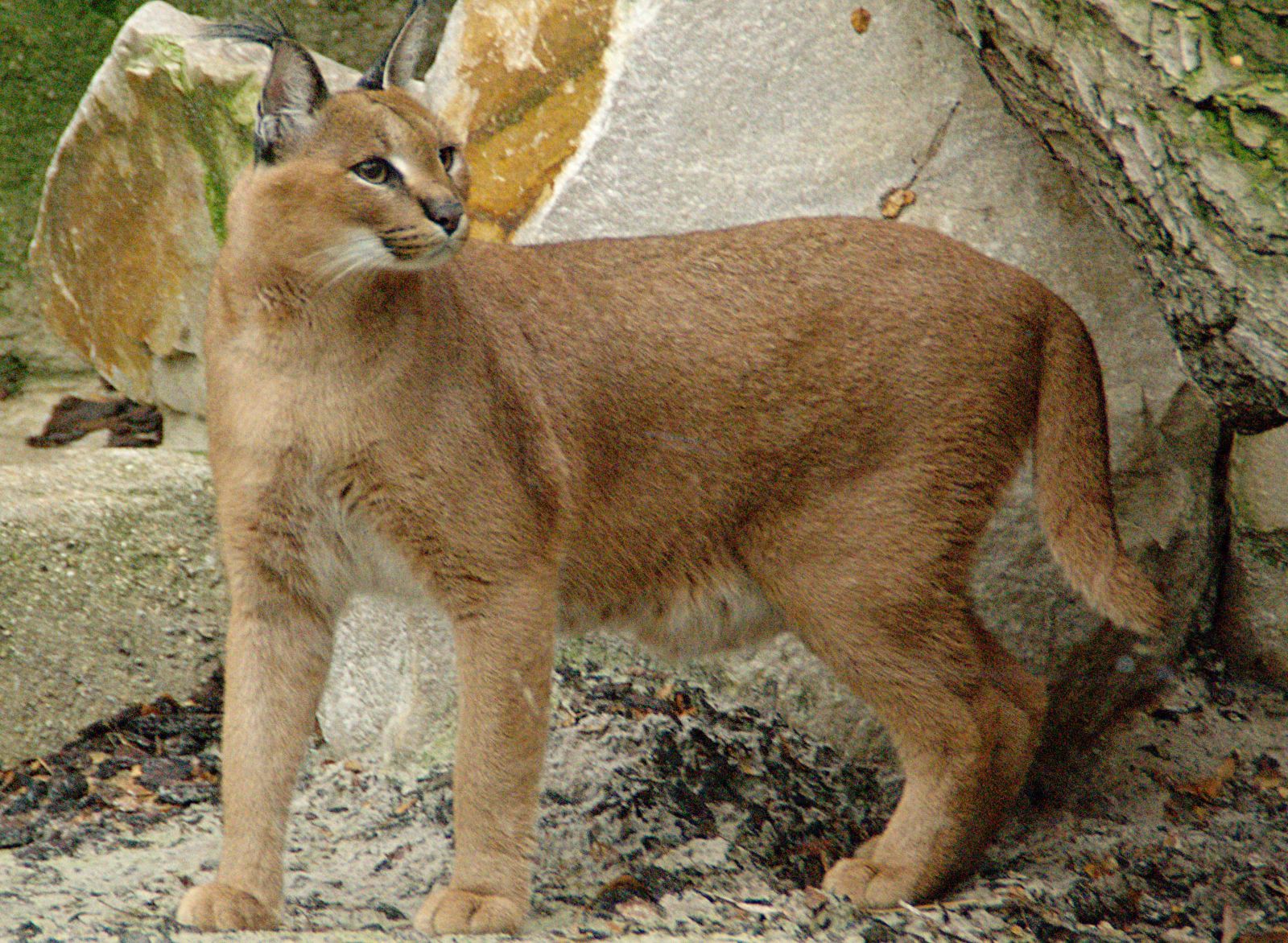 The caracal can be found across Israel. Photo by Habib M’henni/Wikimedia Commons

A beautiful wild feline species, caracals can be found across Israel, from the Golan Heights down to the Dead Sea, and actually seem to have grown in number and distribution over the years.

Caracals usually live on their own but have also been sighted in small groups. Although they live on land, they’re also expert tree climbers and mostly hunt down hares and partridges.

Despite not being in danger of extinction, they are considered a vulnerable animal and it is illegal to kill them, as sometimes happens worldwide, with poachers after the meat and skins and farmers out to protect their livestock. 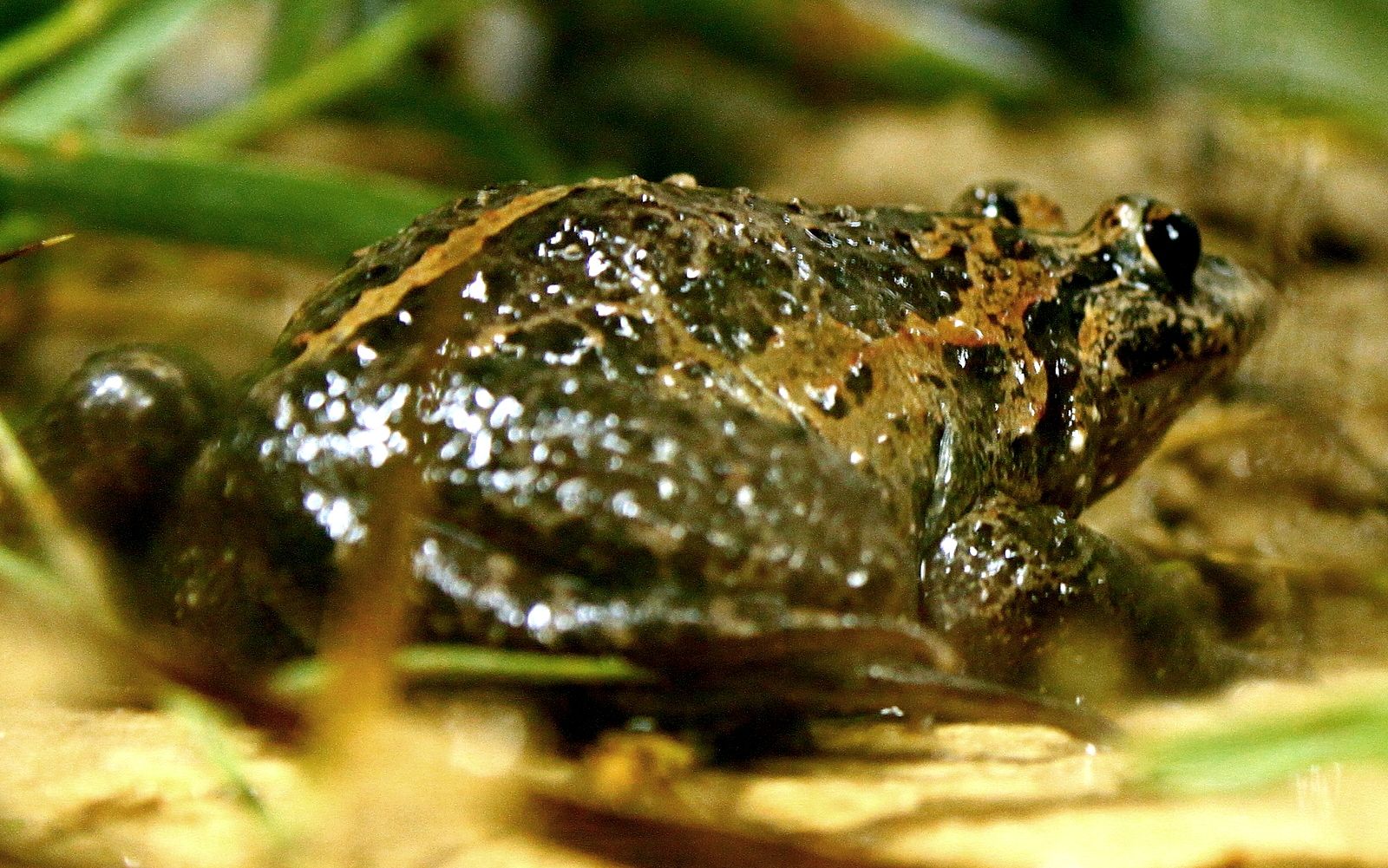 The Hula painted frog was once thought extinct. Photo by Mickey Samuni-Blank/Wikimedia Commons

And now, to a bit of good news: The Hula painted frog, which lives in Lake Hula’s marshes, was considered to have become extinct when the marshes were drained in the 1950s. In 2011, however, a park ranger came across a frog he did not recognize and took it in to experts, who determined that it was in fact the coveted species.

While currently a critically endangered species, at least the Hula painted frogs are still alive. It is estimated that a few hundred frogs still reside in their original environment. 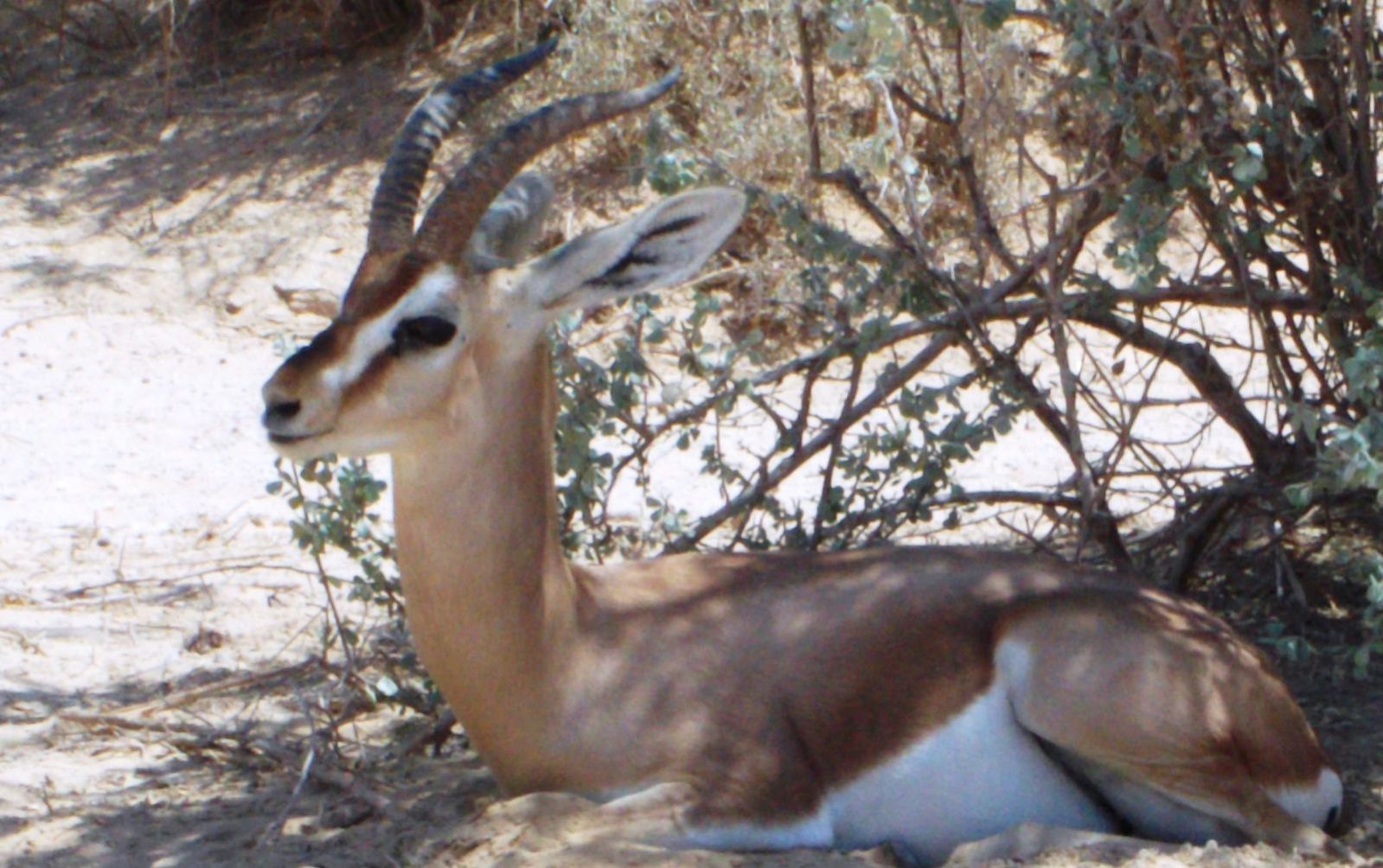 If you’ve ever gone hiking in Israel, you’ve probably come across a mountain gazelle or two. They’ve been here a long time and are even mentioned in the Bible.

Mountain gazelles mostly live in the Judean and Negev deserts and are rather delicate-looking creatures, with thin legs and little horns. But don’t let their quaint appearance fool you – they’re super fast and can sprint at up to 50 mph. The also live a very busy community life, living in packs according to gender and age. 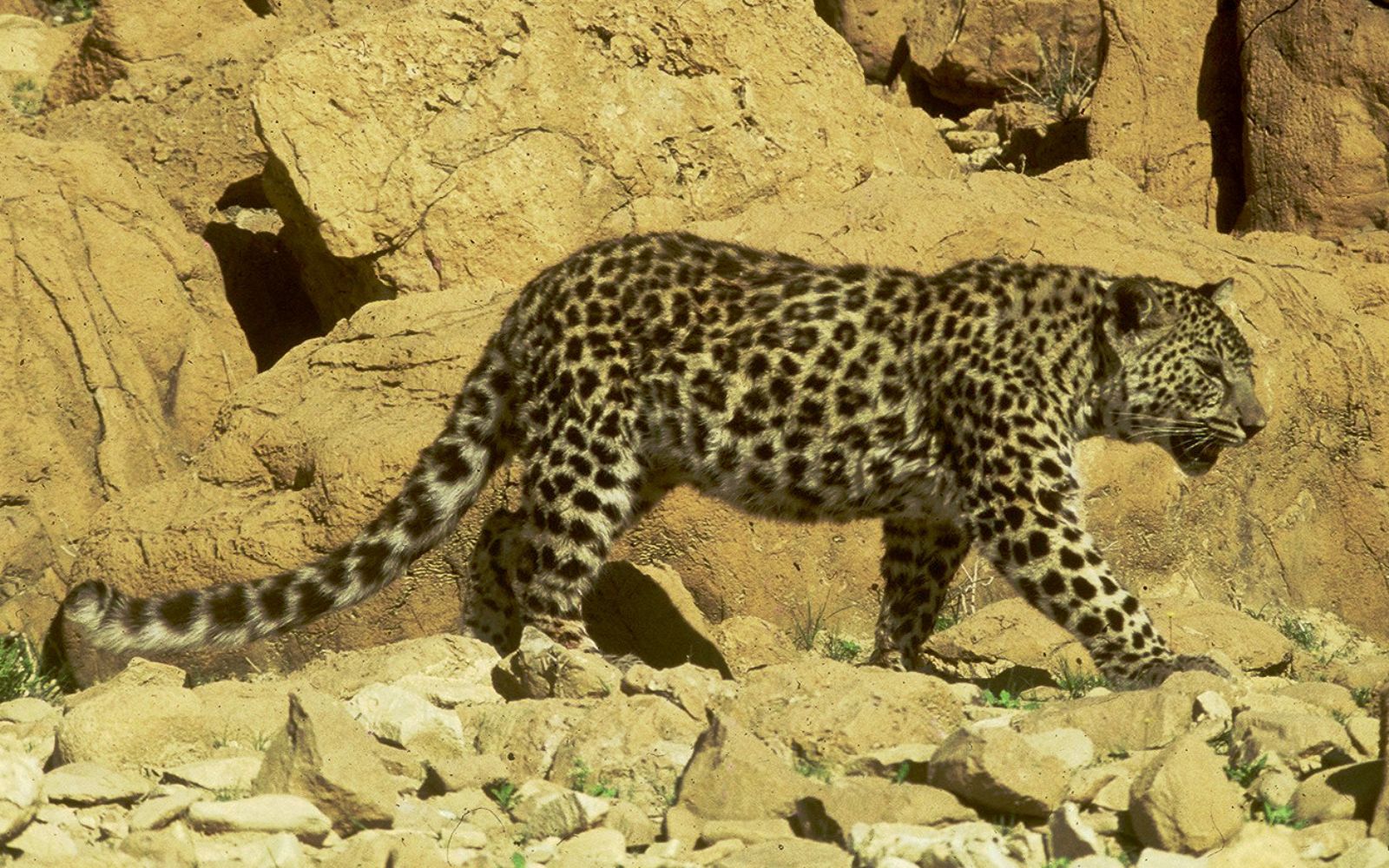 An Arabian leopard in Israel. Photo by Yossi Oud/Wikimedia Commons

Arabian leopards are something of a legend in Israel, with hikers doing their best to spot them and little children told not to stray off for fear of them. Yet unfortunately, the chances of running into a leopard are unbelievably slim since they are on the verge of extinction.

If you do come across one, you’ll be able to recognize it for its small size, long tail, pale yellow coat and black spots (not to mention that it’s the only type of leopard to live in Israel). And you can also rest assured – the leopards don’t eat humans, but rather much smaller prey such as hares, rodents and other little animals. 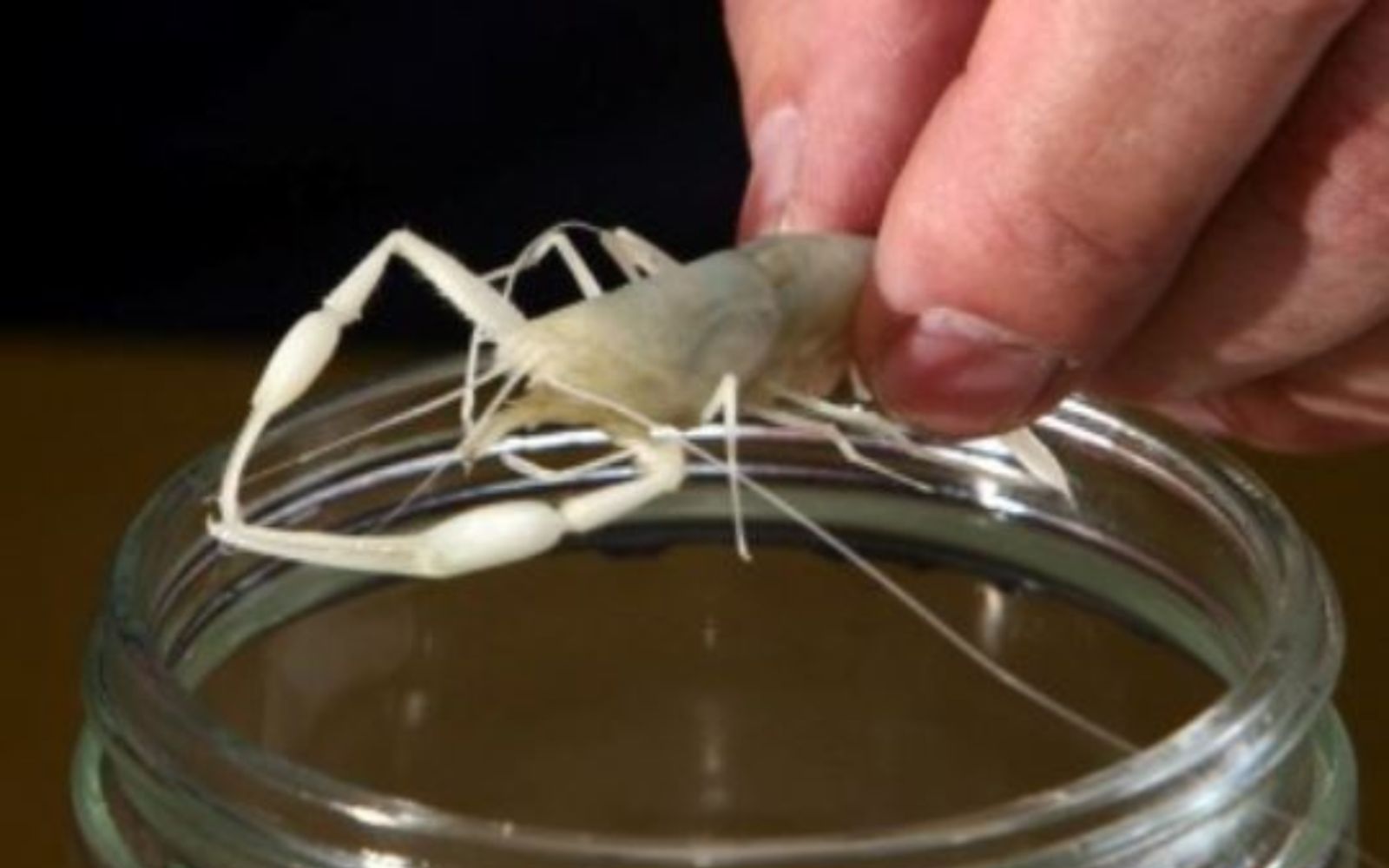 A blind scorpion in Israel. Photo by Sasson Tiram/Hebrew University of Jerusalem

We must admit this one’s not roaming the Holy Land anymore. But it’s just too cool not to mention, so here we go.

Back in 2006, researchers from the Hebrew University of Jerusalem found eight completely unknown, preserved ancient species inside the Ayalon Cave, among them a blind scorpion.

Named after the cave’s researchers, the blind scorpion was unfortunately discovered dead, but its contemporaries may be scuttling across the dark, deep preserves of their surroundings. Also found were seawater and freshwater crustaceans and other terrestrial species that were all related yet distinct from modern-day creatures.