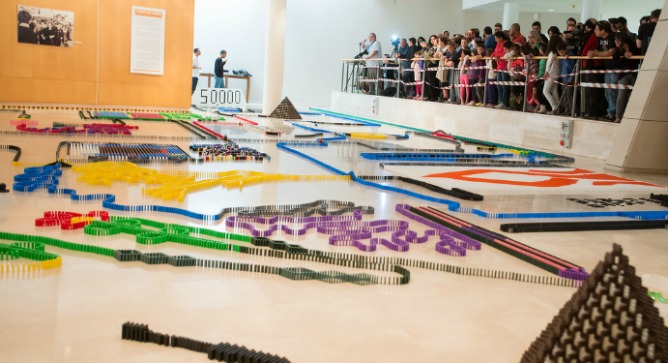 The Passover story has been told in a myriad of media. Two young Israelis recently gave the holiday narrative a new rendition in the form of a 50,000-strong domino chain.

It took Ben-Gurion University of the Negev mathematics student Yogev Levy and his friend Nissim Lopaz, a manager at a Jerusalem bike shop, 72 hours to set up the enormous Passover tableau in the lobby of the Samuel and Milada Ayrton University Center in Beersheva.

Featuring pyramids, the BGU flame logo, the parting of the Red Sea and cool designs, the guys called on some friends to help them build the country’s biggest domino chain to date.

We’re happy but tired,” Levy tells ISRAEL21c, the day after he toppled over his massive Passover mosaic.

The two friends cut their teeth with 30,000 dominos and a Hanukkah mural at the Israel Museum a year ago.

The 50,000 dominos used in their latest creation were made to order at the KodKod factory in Arad in the Negev.

From Yom Kippur to Passover

It was on Yom Kippur that the idea to build large-scale domino chains first came up. In Israel, everything is closed on the Yom Kippur holiday. 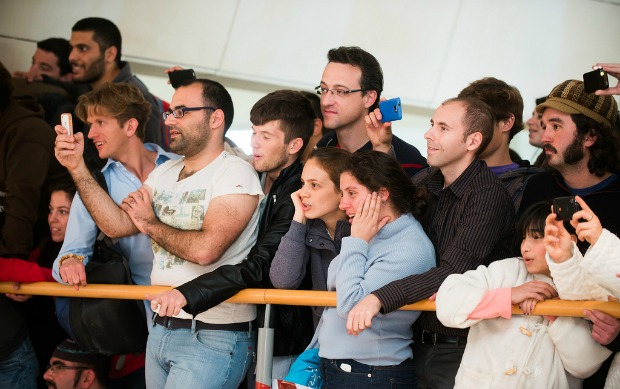 Spectators were amazed at the seven-minute cascade. Photo by Dani Machlis

While many look to puzzle-making as a way to pass time, Lopaz rummaged around in his closet and found an old box of dominos. He set them up in a chain and toppled them down.

But Lopaz realized one box was not enough, and a few days later he bought another one. One wintry weekend, when it was too cold to go out, Levy dropped by Lopaz’s house. They found themselves laying out dominos.

“I think there were about 1,000 dominos laid out around his living room – pretty short. We decided to get a little more serious and bought another 1,000. But now Nissim’s living room was too small,” says Levy.

“Luckily, my grandmother had just moved and her old apartment was empty. We used that and two days later we uploaded our first video to the Internet. Since then we’ve bought more and more dominos and visited more empty apartments.”

The Hanukkah structure was next. Its success led to the Passover mosaic.

“People get really excited when they hear we’re building a massive chain but no one has joined us yet,” Levy tells ISRAEL21c. “We’d be really happy for others to join the fun. We’d also like someone to break our record so we can break theirs.”

The department of publications and media relations at BGU asked Levy and Lopaz to create something on campus with a holiday theme.

On the afternoon of March 17, tens of students, faculty, family members and friends gathered in Beersheva to see the fateful tip of the finger that would start the country’s record-breaking cascade. 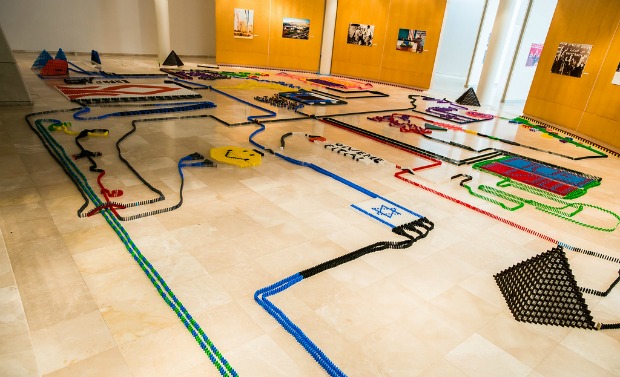 The pyramids and an Israeli flag were included in the display. Photo by Dani Machlis

“The beauty of this is we built it and just one tip of a finger can knock it all down,” says Levy. It took seven minutes for all the dominos to topple over. “That’s a long time in dominos chains. Usually long chains don’t top three or four minutes,” he says.

Levy and Lopaz used an online program to set up their intricate tableau and build according to scale. The pyramids were the highlight of the floor mosaic.

“To watch the pyramids fall was definitely the best part,” says Levy.

“The real joy was watching the audience watch the actual cascade. It was truly a community event with employees bringing their kids, and students all cheering together as the different sections fell,” says Faye Bittker, director of publications and media relations. “My personal favorite — the pyramids.”

Now, all eyes are on Levy and Lopaz to see what their next project will be.