Somewhere on the spectrum between electromagnetic waves that produce visible light, and those that cook food in a microwave oven, are millimeter waves that might hold the key to conquering cancer cells.

When tested in an Israeli lab on human lung-cancer cells, millimeter wave radiation knocked out the cells’ ability to reproduce.

“It disrupts their activity, although we don’t yet know how beyond some speculation regarding the mechanism,” says Asher Yahalom, head of Ariel University Center’s Free Electron Laser (FEL) Laboratory User Center, who also noted that the rays seem to have no effect on normal cells.

Millimeter waves have lots of possible applications – everything from diagnosing skin cancer to improving communication devices – but the Israeli research team is the first in the world to study their effect on lung cancer.

Yahalom tells ISRAEL21c that until quite recently nobody had the tools to produce millimeter waves. The university’s FEL lab developed a free-electron laser that does this by accelerating electrons close to the speed of light and setting them on a wiggly trajectory.

“The question was what would be an application for this laser, and we thought about trying it for different things,” says Yahalom, currently a visiting fellow at the Isaac Newton Institute for Mathematical Sciences in Cambridge, England.

The researchers have collaborated on more in-depth studies with colleagues at a Danish university, funded by the Eva and Henry Fraenkel Foundation in Denmark. 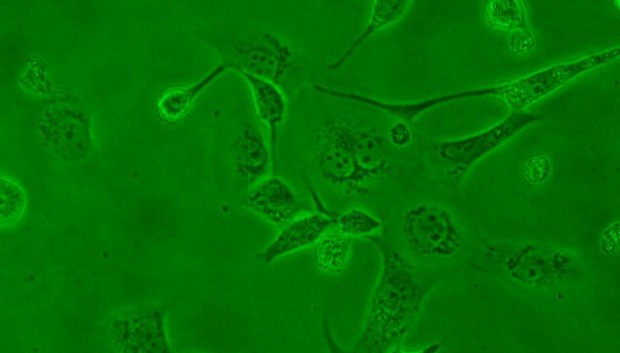 “We are still gathering more data to be absolutely sure this effect is statistically significant and not due to any unrelated factors,” Yahalom says.

A better alternative to x-rays has long been sought because although they kill cancer cells, they also kill healthy surrounding cells.

“There are two kinds of radiation,” he explains. “Ionizing radiation is what is usually used for cancer. It has the ability to tear apart molecules, so it causes death to all cells. What we have done is quite different. Millimeter wave radiation is non-ionizing, so it may interrupt functionality but not the cell itself.”

While the Israeli and Danish scientists check and double-check the results of their experiments using radiation sources that do not exist anywhere else in Israel, scientists in several countries are studying terahertz waves, which are a bit shorter than millimeter waves. Prof. Rafi Korenstein’s team from Tel Aviv University had previously looked at their effects on healthy white blood cells.

“We went the other way around — we wanted to see how the radiation affects non-healthy cells, and this is quite novel,” says Yahalom.