Next stop for the people of the book? A freewheeling public library to peruse as they wait for a bus. No fines, no rules, no shushing.

Imagine a library where there are no due dates and no librarians telling you to be quiet. Israeli artists have developed a new model for the urban library: a free bus-stop library for commuters and travelers of all ages.

Daniel Shoshan, an installation artist and lecturer at the Technion-Israel Institute of Technology, along with Technion graduate Amit Matalon, started this new public library concept figuring that people sometimes have long wait times for buses.

Their motto: You may take, you may return, you may add.

The duo built a series of bookshelves at bus stops throughout Israeli cities. The idea is that anyone may take a book from the shelf, read it at the station or take it on the bus and return it when done.

No due dates, no late fees, no rules.

At first they did an experiment to see if the dynamics would work. Would the shelves refill? Would people participate?

“It started as an artistic project, and all of a sudden it was so successful I knew … it fits a new model for a public library,” Shoshan tells ISRAEL21c. “Municipal libraries in Israel have asked me to start it here and I believe it will be a commercial project one day.”

Shoshan believes the bus-stop libraries could be a place to recycle reading material taking up space on people’s shelves and in public library basements.

“I know that people have a lot of books at home and they do not know what to do with them,” he says.

How the “novel” idea came about 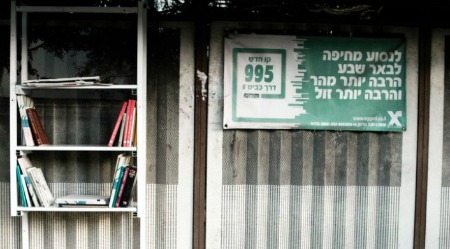 Commuters are free to take books on their ride and return them – or not.

“The system found its own equilibrium after some time, and the phenomenon of gathering books by residents began to appear, creating subject-centered bookshelves following local needs,” the two artists report.

At the bus stop closest to the university, students exchanged science reference books, their dissertations and science fiction. At an ultra-Orthodox neighborhood the residents switched in copies of religious texts and CDs, and Russian-speaking residents at the Ziv-Hankin bus stop created a Russian-language library.

The artists were thrilled to see this self-organization take place.

The pilot was deemed a success as a self-sustaining public library, and now cities throughout Israel are coping the model. Shoshan, who says he has intellectual and “spiritual” creative rights to the idea, has been invited to implement the idea in some neighborhoods in Washington DC, and New York.

Wait in line at the bus stop, shuffle through a few books, and take one with you on the commute? The idea could not only increase literacy rates in communities, but also serve as a new way of connecting people.

“Citizens in the city are now creating new ways of sharing,” says Shoshan. “In Kfar Saba, Hadar Yossef, Haifa, people started to exchange books among themselves without any rules in place. You can put your books on the shelf, and others will add or take from it. It’s just the citizens and neighborhood monitoring it by themselves.”

This could also be a creative marketing platform for unknown authors to spread their works. Israel already has professors giving scholarly lectures on trains. Maybe thanks to this new project, new authors will give public reading at bus stops.

Shoshan thinks such a project could work as a community-builder in disadvantaged areas as well. With little outlay in costs, what’s to lose?

“I am sure it will work in poorer neighbors,” he says. “When you trust the people, they will pay you back with their time. Especially when they know it’s not a project run by the [government].”