Concerned about the amount of radiation coming from your cellular phone into your body? You’re not alone.

A multiethnic team of scientists led by Israel-born Florida businessman Haim Einhorn devised the $30 Bodywell Chip using a patented process that reduces the absorption rate of electromagnetic radio frequency (RF) energy by more than 80 percent. The chips are made by Swiss-owned EZ Technologies and tested in US government-certified labs.

Now the push is on to get the chip onto phones before they leave the factory.

Emerging evidence of possible links between mobile phone use and brain tumors, decreased sperm count and other potential health hazards has convinced many countries, including the United States, to require mobile device manufacturers to reduce the specific absorption rate (SAR) — the amount of RF energy absorbed by the body during mobile phone use – to no more than 1.6 watts per kilogram.

Most current phones comply with this target, but to play it safe many people are buying radiation-blocking or radiation-monitoring devices for their phones.

Einhorn, a former real estate developer with a personal passion for wellness, three years ago purchased a promising technology that works not by reducing radiation – which has the unwanted side effect of weakening reception – but by drastically reducing the body’s absorption of the waves.

“It was already an existing concept but it had no basis in science,” Einhorn tells ISRAEL21c. “We know what it does and how effective it is because we see the results, but for me to launch on a global scale I needed scientific research to back it up.”

A mission to the world

This team provided Einhorn with the scientific foundation he needed to get started making and marketing the unique peel-and-place Bodywell Chip. EZ Technologies presented its product formally at an event at CUNY in February, and it is sold through the company’s website and on Amazon.

But Einhorn is thinking bigger.

“Since it has the strength of reducing SAR up to 80.3 percent, any cautious and responsible entities — including the cell companies themselves — should welcome our product to minimize potential risks that we still don’t understand fully,” he says.

Mazeh is now carrying out research based on an American study suggesting that radio waves may harm the retina of the eyes. “The eye is especially sensitive and doesn’t have the ability to restore itself,” Einhorn explains. “We will study this with mice to see how our product helps.”

The strongest interest in Bodywell is coming from Latin America, reports Einhorn. “I have been invited to do TV interviews in several countries there,” he says. He has also been approached by a phone maker in India. 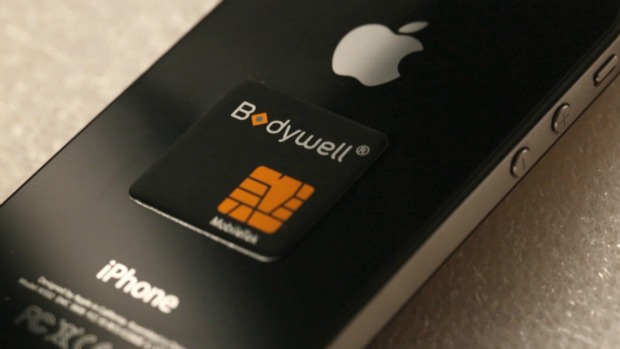 The Bodywell Chip does not interfere with a phone’s reception.

“I see this as a mission to the world more than a business. I want the concept to be part of comprehensive government publicity in the same way that governments enforce laws publicizing cigarette dangers. People should be aware that we have something that could minimize substantially the potential risk.”

What does SAR really mean?

Though the United States is the primary target market for the chip, in 2011 the World Trade Organization issued a warning that cell phone risk claims largely go unheeded in the United States. That may be slowly changing; in August 2012, US Congressman Dennis Kucinich introduced the Cell Phone Right to Know Act to require radiation warnings on cell phones.

Einhorn wants to alert people to the fact that the rule limiting SAR to 1.6 watts per kilo does not guarantee safety because the phones are tested by the Federal Communications Commission under simulated conditions.

According to the FCC guide to SAR for cell phones, cell phones cannot be reliably compared for their overall exposure characteristics on the basis of a single SAR value.

“SAR testing uses standardized models of the human head and body that are filled with liquids that simulate the RF absorption characteristics of different human tissues. … FCC approval means that the device will never exceed the maximum levels of consumer RF exposure permitted by federal guidelines,” the guide states.

In the real world, Einhorn argues, the SAR level fluctuates and could be much higher in certain circumstances, such as when RF output rises in response to weak connectivity.

“If you measure absorption of radiation to the brain when you have only one or two bars, you’d see how off you are from the 1.6 kilo.” Parents are especially eager to find an effective device that reduces risks to their children using a cell phone, he adds.