Photo by Jorge Novominsky/Flash90
Tens of thousands of cranes fly through the Hula Valley in northern Israel every spring and fall.

At least 500 million birds of 200 different species fly across Israel each spring and autumn en route to and from Africa, Europe and Asia. And more than 70 native Israeli species, such as the hoopoe (its national bird since 2008), cuckoo, Egyptian vulture, short-toed eagle, hobby and lesser kestrel, often head to warmer Africa in winter.

Hordes of birdwatchers from across the globe flock to strategic locations along the migratory route twice every year to take in this extraordinary sight. And all year long, naturalists work hard to preserve flyways, gather data on the visiting birds and teach adults and kids how to make these feathered friends feel welcome.

ICSBM’s many projects range from studying the birds and their habits to protecting them during their long trip. It has a radar warning system for military and commercial pilots aimed at preventing bird strikes, a common danger during takeoff and landing. When planes hit birds at high speeds, these accidents are not only fatal to the birds but also dangerous for pilots and sensitive equipment.

Leshem worked with Jordan, Greece and Turkey to expand this successful scheme throughout the region, and collaborates with ornithologists in European, Mideast and African countries to study the behavior of migrating birds as a predictor for climate change. 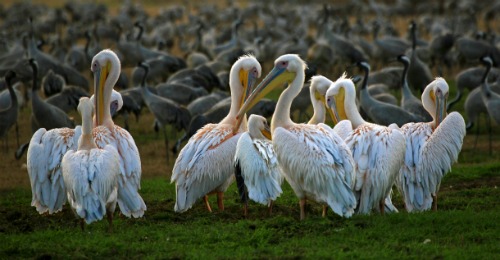 Photo by Doron Horowitz/Flash90.
Flocks of Pelicans visit Israel on their long migration.

Leshem’s slogan, “Migrating birds know no boundaries,” was the title of a six-year USAID-Middle East Regional Cooperation Foundation-funded program that established ringing stations and trained Israelis, Palestinians and Jordanians to staff them.

Ringers, also known as banders, capture visiting birds long enough to place an aluminum band around one leg. The band is engraved with contact and ID information so as to monitor them from year to year and place to place.

In another project of the program, schoolchildren in Israel, the Palestinian Authority and Jordan tracked the movement of migrating German white storks fitted with satellite transmitters.

These initiatives have continued and expanded. Israel now has a national network of 10 bird-watching stations run in cooperation with the Israel Ornithology Center, and Leshem is working with Palestinian and Jordanian authorities to attract additional eco-tourists and birdwatchers to the Middle East.

Once upon a time, the natural salt marsh at the southern tip of Israel was a major “gas station” for birds heading up from Africa in the spring, according to Rea Shaish of the International Birding and Research Center in Eilat.

“After crossing the deserts south of us, they have to refuel,” explains Shaish. “They stop every few days to regain their fat sources to support them energetically and stay hydrated.”

Overdevelopment caused the marshes to disappear by the 1960s, leaving the migrating birds high and dry. After a couple of decades, the Keren Kayemeth LeYisrael-Jewish National Fund transformed a rubbish heap in the same area into a green sanctuary with freshwater and saline lagoons. And the birds returned.

“We have made it as close as possible to the old salt marsh. Here they have an area in which to rest and refuel without disturbance,” Shaish tells ISRAEL21c.

IBRC monitors the effects of environmental changes on banded birds by tracking their movements and migration every year. “We also have an educational project with schools here in Eilat and guided tours for tourists every week, where we explain about ringing, which is our main research tool,” says Shaish, who is a ringer, tracker and guide at the facility.

The IBRCE offers a two-week session for volunteers during the autumn and spring migration. They learn how to handle different species as they extract them from traps and nets for ringing, such as swallows, prinias, little stints and shrikes.

At the peak of spring, hundreds of species from Asia and Europe stop by, including large raptors such as steppe eagles, sparrow hawks and white storks. “The dominant species are blackcap warblers, barn swallows and European bee-eaters, one of most colorful birds in Israel,” says Shaish. 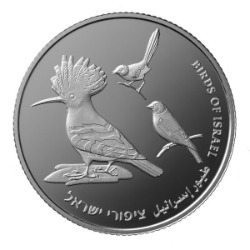 Israel issued this coin in 2009 to honor its hundreds of feathered friends.

The center is home to a year-round population of several hundred pink flamingos, adding color to Eilat’s 200-plus indigenous species such as sun birds, shrikes and hoop larks.

Some birds winter in Israel

“Our winter is very light and warm, so a lot of migrating birds stay here for the winter,” says David Glasner of the International Birdwatching Center of the Jordan Valley at Kfar Ruppin.

Grey herons, black kites, robins, common cranes and ducks are among 94 species of cold-weather visitors providing a dependable population for birdwatchers to enjoy.

“Even the numbers of some resident species in Israel grow during the winter because others come from northern countries like Turkey or Greece,” adds Glasner. “We have 350 species on our local checklist, at least 120 of which are wintering birds.”

The center has developed and shared strategies to protect the hungry travelers from getting entangled in the nets topping the many commercial fish ponds in the area and from ingesting pesticides as they peck in its vast agricultural fields.

In partnership with Israel’s Nature Reserve Authority, IBCJV offers fish farms alternative wide-stringed nets less likely to snare birds. When necessary, its staff rescues, rings and sets free fish-eating pelicans, cormorants and herons that do get stuck. Any wounded birds are sent for treatment at a hospital in the Ramat Gan Safari.

To keep farmers and birds happy, the best solution has been setting up barn owl and kestrel nesting boxes as part of a national effort to introduce this natural rodent-control method. Reducing pesticide use benefits everyone from the migratory birds to the end consumer.

In another longstanding cooperative venture, the IBCJV partners with Israel Electric to keep larger migrating birds such as pelicans, herons and white storks from getting electrocuted on power lines.

“Our part in this is to find the places where the birds are getting electrocuted and inform the electric company,” Glasner tells ISRAEL21c. “They come and install insulation around the high-voltage wires so when the birds sit on the poles and touch the wires with their wings, they do not get electrocuted and do not damage the system.”

The center offers real-time bird-watching information for visitors and correspondents, and maintains a rural lodge in walking distance of the bird-watching hot spots on its grounds.

“To see the birds of Europe you come to Israel, because they all migrate here,” says Jerusalem Bird Observatory manager Alen Kacal. “Israel is one of the best places in the world to view bird migration, along with Panama, Morocco and Gibraltar.”

The JBO, Israel’s first urban wildlife center, sits between the Knesset and the Supreme Court. Its sheltering trees and shrubs attract the kinds of insects that birds like to eat, and there is a pond for bathing and drinking. Thousands of birds stop here to fill their bellies and rest before continuing their long trek, and some — including many European robins and chaffinches — choose to stay permanently.

The center’s ringing operation bands more than 10,000 birds a year and records each one’s weight, gender and species. This provides a wealth of information about the feathered visitors.

“If a bird we ringed ends up in Estonia or Kenya, they contact us and tell us where the bird is, and we do the same,” she tells ISRAEL21c. “We’ve been able to make detailed maps of where the birds go, how long it takes them to get there, what their route is and where the most important ‘gas stations’ are along the way. These are the places we need to preserve.”

Human visitors of all ages flock to JBO daily for informal bird-watching as well as lectures, demonstrations and creative art programs.

“We want people to be aware of what’s in their backyards, and we want them to make a personal connection with the nature around them,” says Kacal. “We also try to make a global connection: The little bird they see here has come from Sweden on a huge journey and if we don’t take care of our environment it cannot eat or drink and it will die. So we have a global responsibility.”

Where to see migrating birds

The Kibbutz Lotan Ecotourism and Birdwatching Center in the Arava Valley is among several prime bird-watching spots during the spring and fall migrations. Other southern hot spots include the Negev desert, Dead Sea and Eilat. In northern Israel, popular bird-watching areas are the Agamon Hula Ornithology and Nature Park, Kibbutz Ma’agan Michael near the southern Carmel Mountains, and the Beit She’an and Jezreel valleys.

UNCOVER ISRAEL - Get the ISRAEL21c
Weekly Edition free by email
Sign Up Now!
Bring Israel's story to life.
Millions of people around the world rely on us to gain a deeper understanding of Israel. We are the trusted source for original content you won't find anywhere else.
You can make a difference. Donate today to support journalism that brings Israel’s story alive.
SUPPORT ISRAEL21c
Read more on:   Environment, cranes, Yossi Leshem, International Center for the study of bird migration, International birding and research center in Eilat, Birds in Israel, Bird migration