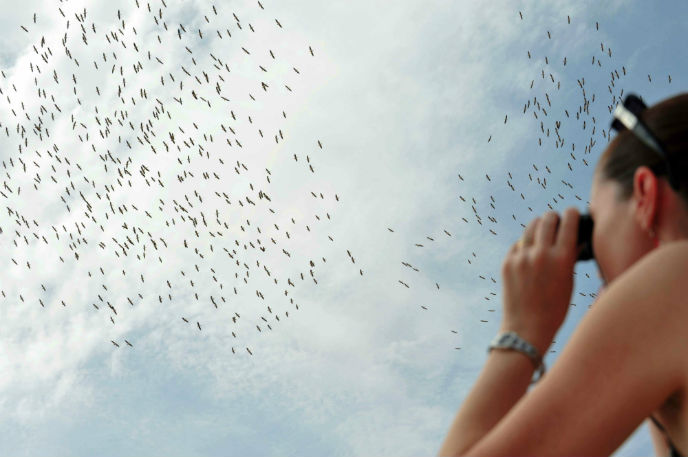 Migrating cranes in the Hula Valley. Photo via www.shutterstock.com

Migrating cranes in the Hula Valley. Photo via www.shutterstock.com

The intermittent rain across Israel this past weekend is one of the signs fall is here. The 20,000 cranes to descend on the Agamon Hula Ornithology and Nature Park  is another indication that summer has ended.
Visitors to Israel’s north watched the arrival of 20,000 cranes to the Hula Valley over the Sukkot holiday. In total, some 100,000 of theselong-legged and long-neckedbirds will stop by during the migratory season.About 30,000 of them will stay for the winter while the rest keep going.
And that’s not all. The cranes are just one of 200 different species of feathered friends headed this way. Israel will see a whopping 500 million birds touch down for a rest as they make their way to Africa from Europe. After all, the country sits at a major migratory point  along the route connecting Africa, Europe and Asia.
“Israel sits on the junction of three continents,” Prof.Yossi Leshem, director of Israel’sInternational Center for the Study of Bird Migration (ICSBM), told ISRAEL21c in an earlier interview. “Politically, it’s a disaster, but for bird migration, it’s heaven. We have a huge bird bottleneck — it’s a superhighway.”
With the birds come the bird-watchers. Israel is a niche destination for ornithologists, and bird lovers from across the world come to prime spots such as the Hula Valley every migratory season.

Of course, the Hula reserve is not the only place to catch sight of our flying friends. Other bird-watching sites can be found in the Beit Shean Valley, Jerusalem, Latrun area and the Arava Desert.
For bird watchers, the flapping of wings is great news,but the farmers in the Upper Galilee area are already spreading corn kernels in a bid to save their crops from the hungrymasses.
According to the Hebrew media, Israeli farmers sprinkle some $850,000 worth of kernels every migratory season in their fields in the hope that the birds will feed on something other than their crops.
Instead of going to a bird sanctuary or zoo in Israel this autumn, just head outside and look skywards,where there are thousands of multi-colored, different sized birds waiting to be seen.

UNCOVER ISRAEL - Get the ISRAEL21c
Weekly Edition free by email
Sign Up Now!
Bring Israel's story to life.
Millions of people around the world rely on us to gain a deeper understanding of Israel. We are the trusted source for original content you won't find anywhere else.
You can make a difference. Donate today to support journalism that brings Israel’s story alive.
SUPPORT ISRAEL21c
Read more on:   Jerusalem, Latrun, Yossi Leshem, cranes, Arava Desert, Hula Valley, Beit She’an, Spotlight on Israel, Bird migration