An occupational therapist at University of North Carolina hospital wearing a BioHug vest.

Most of us have moments when we could really use a hug – when we’re sad, lonely, scared or stressed. The therapeutic value of a good squeeze for emotional wellbeing is well documented.

For people affected by autism, post-traumatic stress and anxiety or attention disorders, research has shown that hugging is an especially effective soother.

That is the scientific fact behind the development of the BioHug Vest by Haifa-based BioHug Technologies. Already in use and soon to roll out to a wider market, the vest provides an effective, portable, non-restraining stress-relief solution using deep, hug-like pressure.

Technion-educated engineer Raffi Rembrand already had business experience and a few medical-related inventions under his belt. As the father of a son with autism, Rembrand well understood the calming benefits of hugging.

“It has not only an emotional content, but pressure on certain parts of the body has a physiological effect of calming in a measurable way,” says Schiffmiller.

On a practical level, it’s not always possible (or ethical, in a school setting) to get a hug as often or as long as needed. Others have tried to solve the problem with devices like the “squeeze machine” improvised by animal science expert and autism advocate Temple Grandin based on a cattle-restraining chute. The hefty box is fairly effective but not practical, says Schiffmiller.

“Others have tried to induce a calming effect using constant pressure from weights, and it works — but only for short time, because after a few minutes the body gets used to it,” he says. The same problem applies to a few pressure vests on the market, which are also less effective because they require manually pumping air into them – something not every wearer can do.

Rembrand’s adjustable-fit, cotton-blend vest shell has an integrated lightweight air compressor and single-board computer, plus tiny valves and pipes that feed compressed air to plastic “bubbles” under the lining of the washable vest.

The unique twist to this invention is that the air can be pumped into the bubbles automatically according to a pre-defined script, or manually via remote control. The location and duration of the “hug” can be varied so the effects are longer lasting. 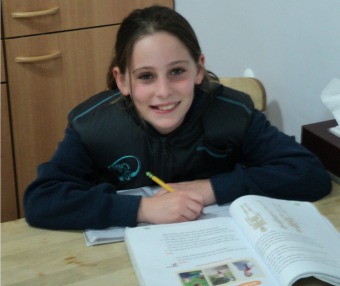 Kids can even wear BioHug comfortably while doing homework.

The vest is powered by rechargeable batteries and lasts for up to four hours between charges.

For PTSD and chronic pain

BioHug Vest hit the market a few months ago and is being used in group homes for people with autism in Israel, in schools in Israel and the US, and by occupational therapists in the UK and Canada.

“We started in the world of autism,” says Schiffmiller. “One of the other areas we’re using it is post-trauma. After the November [2012] rocket barrages in the south, we teamed up with OneFamily, which helps victims of terror, to use BioHug as a calming intervention for those suffering post-traumatic stress symptoms.”

BioHug Technologies is expecting to begin clinical trials at Tel Aviv’s Ichilov Hospital to see how the vest helps patients suffering from chronic pain, “because there is a stress component to chronic pain,” explains Schiffmiller, who holds a degree in experimental psychology and comes from a management background in the pharmaceutical industry.

The vest was developed with input from occupational therapist and autism researcher Eynat Gal of the University of Haifa and the Research Institute for Health and Medical Professions at Ono Academic College in Israel. The company’s board includes Shlomo Oren, CEO of Carmel Haifa University Economic Development Corporation, and Margalit Tirosh, former CEO of ALUT – The Israeli Society for Autistic Children.

“The distance between the bottom and the top in Israel is small, and Biohug is a really good illustration of that concept,” Schiffmiller says.

“Ours is a story of a father of an adult with autism who is also an engineer and had a great idea. He walked into ALUT and got the support of the largest autism advocacy organization in the country. His wife frequently talked with researchers concerning the treatment of autism, and this led to a collaboration with the Haifa University on the project.”

Through those sources, the company entered the L.N. Green Technological Incubator in Haifa, which operates privately under the auspices of the Israeli Chief Scientist’s Office. “I am not sure there’s any other country where this could have happened the same way,” Schiffmiller observes.

UNCOVER ISRAEL - Get the ISRAEL21c
Weekly Edition free by email
Sign Up Now!
Bring Israel's story to life.
Millions of people around the world rely on us to gain a deeper understanding of Israel. We are the trusted source for original content you won't find anywhere else.
You can make a difference. Donate today to support journalism that brings Israel’s story alive.
SUPPORT ISRAEL21c
Read more on:   Health, Medical devices, BioHug