This past week, 66 years ago, conductor and composer Leonard Bernstein embarked on a plane bound for the newly-founded State of Israel to assume the duties of the musical director of the Israel Philharmonic Orchestra (IPO). It was the beginning of a relationship that would span decades.

Young but already well-known, Bernstein departed for Israel on September 17, 1948 from New York’s La Guardia Airport. He carried with him recordings he made with American orchestras to present to the IPO Music Library, including include Gershwin’s An American in Paris, Marc Blitzstein’s Airborne Symphony and Igor Stravinsky’s L’histoire du Soldat. 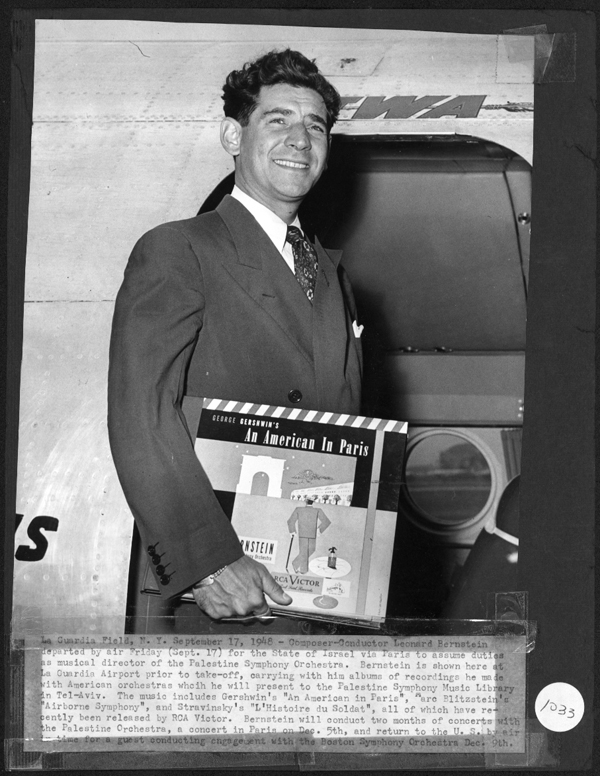 Rather than downplay his Jewish heritage as did so many others of his generation, Bernstein highlighted it. He completed his first large-scale work, Symphony No. 1: Jeremiah, in 1943. The piece was first performed with the Pittsburgh Symphony Orchestra in 1944 and received the New York Music Critics’ Award.

On his first visit to the young country, Bernstein led the IPO in a tour of 40 concerts in 60 days. Rather than being fatigued, he was energized, writing to his mentor, the conductor-composer Serge Koussevitzky, “I feel that I shall spend more and more time here each year. It makes running around the cities of America seem so unimportant – as if I am not really needed there, while I am really needed here!” 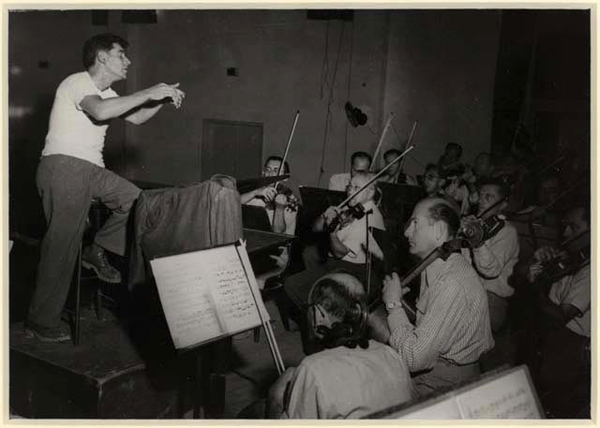 He wrote to his parents, saying, “If my present mood keeps up I see my future as very close to the future of Israel. I can do so much here–and it’s the most important of all.”

On November 20, 1948, Bernstein traveled to Beersheva with the IPO. One day earlier, the UN had ordered Israel to withdraw its troops from the Negev city, which had been captured  the month before. Israel declined to fulfill the UN order and stayed. It was under these conditions that Bernstein and the IPO came to entertain the troops.

An archeological dig served as a makeshift concert venue. Bernstein biographer Susan Gould quotes an eyewitness report by South African writer Colin Legum: “The well of the amphitheater is alive with chattering soldiers – men and women of the front-line army, Jews from Palestine and the British Commonwealth and U.S., Morocco, Iraq, Afghanistan, China, the Balkans, the Baltic, even one from Lapland.” Gould relates, “Local residents arrived, and some wounded soldiers were transported by ambulance from the hospital nearby. At 3:30 PM, the concert began. Bernstein played three concerti in a row, not only a bonanza for his listeners, but also a first for him: Mozart’s K. 450 in B flat, Beethoven’s First Piano Concerto, and Gershwin’s Rhapsody in Blue, a most extraordinary and ambitious encore! A violinist supported Bernstein’s chair when it began slipping along the precarious platform.”

The IPO’s online history states that, “On 20.11.48, a few days after its liberation, the IPO performed a moving concert on Beer Sheba’s dunes and senior orchestra members remember the young Leonard Bernsten playing and conducting the orchestra before 5,000 soldiers within earshot of the retreating Egyptian forces.” Following his first trip, Bernstein continued to visit Israel almost every year, donating his services to the IPO and, in the process, creating a world-class orchestra. It was not all work; in addition to business, there was pleasure — as in this playful photo snapped at a kibbutz in 1950. In 1957,the IPO entered its new home, Tel Aviv’s Heichal Ha-Tarbut (“Hall of Culture”). The occasion was marked with the performance conducted by Bernstein of a new piece that had won the young composers contest, “Hakdamot La-Moed” (“Festival Prelude”) by Noam Sheriff, (who went on to an illustrious career as one of Israel’s chief orchestra leaders).

Bernstein’s Symphony No. 3: “Kaddish,” composed in 1963, was premiered by the IPO and dedicated “To the Beloved Memory of John F. Kennedy.”

In 1967, Bernstein was among the first to visit Jerusalem’s Old City and the newly retaken Western Wall. He came to conduct a “peaceful reunification” celebration comprising three concerts: one at the Israel Convention Center in Jerusalem, one at the Fredric Mann Auditorium in Tel Aviv; and one at the amphitheater on Mount Scopus. 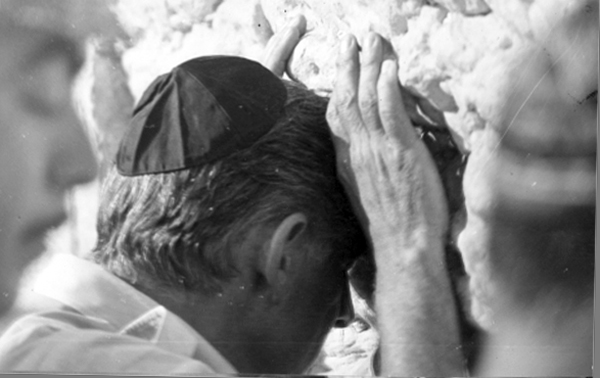 “Now, campus and amphitheater, like the Holy City itself, were liberated, and Jerusalem Mayor Teddy Kollek, an ideological (and idealistic) soulmate of Bernstein, sponsored the concert, announced as ‘the cultural opening of the united city of Jerusalem'”.

Bernstein continued his close relationship with the IPO which in 1978 sponsored a festival commemorating his years of dedication to Israel. In 1988, the IPO named him Laureate Conductor, a title he retained until his death in 1990.