In photo after photo, Doron Polak’s naked body screams a silent message. One shows his bare skin providing the screen for his father’s autobiographical Holocaust film in Berlin. Another shows him lying on the cement floor of his Israeli studio. An image taken in a Barcelona bathroom has the artist-curator covered in flour and Dead Sea mud.

One should not confuse Polak’s “Bodies” project with “Naked Sea” by Spencer Tunick, who came to Israel in 2011 to photograph 1,000 nudes at the Dead Sea as an attention-getter for the lowest place on earth. Polak identifies with the school of drama that the actors matter more than the stage setting.

“I leave my own DNA on my works,” says Polak.

Though his versatile career also has him producing films, corporate art events and worldwide exhibits showcasing Israeli art, “Bodies” is his decade-long attempt to internalize and convey his father’s Holocaust experiences.

“Being a victim is something I want to analyze with my own naked body,” Polak tells ISRAEL21c at his studio in Givatayim, the Tel Aviv bedroom community where he was born in 1953.

“When we talk about the Holocaust, most people are fed up with the usual images — they don’t feel anymore — so we need to find an updated means to bring out those feelings. 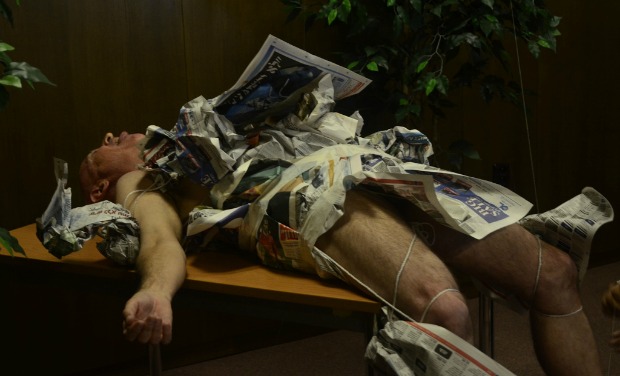 Polak in a live exhibition in Prague. Photo by Varda Carmeli

“I want to analyze what it is to be standing naked in front of a soldier in terrible cold, and I want people to understand that nature was a witness. That’s what the leaves are about,” he says, pointing to a netted pile of brown leaves he collected in the Riga, Latvia forest where his grandmother was murdered by the Nazis.

Notwithstanding “Bodies,” it would be incorrect to peg Polak as a Holocaust artist. With a degree in theater and political science from Tel Aviv University, he has curated 300 exhibitions of Israeli art (including sculptress Dina Merhav’s “Birds in Chinese” last November) and founded a fringe theater group 30 years ago.

He edits an art magazine and penned more than 200 articles, 100 professional catalogs and three plays. He produces public art festivals for Israeli cities, as well as trade shows and events for clients including IBM, the National Lottery, the Tourism Ministry, Bank Leumi, Sheba Medical Center and Givatayim Theater.

In January, Polak curated an exhibition at Mitzpeh Ramon, a Negev desert town known for its huge natural crater, for the 20th anniversary of the Israeli branch of the International Artists Museum. The exhibition will be at the 92nd Street Y in Manhattan from March 11 to April 28. 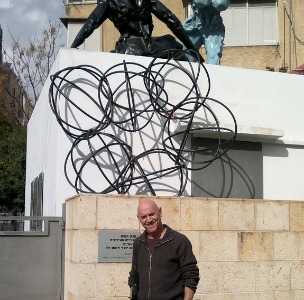 Polak outside his Givatayim studio, where he also gives historic tours and exhibits works of other artists. Photo by Abigail Klein Leichman

“The International Artists Museum is a no-walls museum formed by hundreds of artists across the barriers of nationality,” explains Polak, who became its Israeli representative in 1993.

The impetus for the organization was the end of martial law in Poland in 1983, which freed artists to exhibit in public. Multinational members cooperate in a major exhibition every few years in a different city. In 1995, Polak organized an exhibition of 15 artists’ work in Mitzpeh Ramon entitled “Coexistence,” which he took to Lodz later that year.

Through the International Artists Museum, Polak arranges five or six exhibitions each year in 25 countries. In February, he went to Prague and Vienna with “Artists: Messengers of Peace,” sponsored by the Israeli pharmaceuticals company Dr. Fischer.

“Since 1994, my principal role is trying to give exposure to Israeli artists,” he says.

“Almost every month I’m somewhere else,” he says. “In the spring I will bring 10 Israeli artists to Pune, India, to work with13 young girls in an orphanage to make a sculpture garden of recycled materials.”

Polak has led recycled art workshops since around 1990, when he was hired by Israel Electric to run a community relations project. At power stations in Jerusalem, Haifa and Tel Aviv, he opened studios where people could create with scrap wire, wooden poles and other worksite detritus. Newspapers are one of his favorite materials, coming from nature and capable of going back to nature.

The studio where Polak has worked since 2006 is recycled as well. The building housed Givatayim’s first waterworks in the 1920s. He procured the neglected space as a rehearsal venue for Tara, his troupe dedicated to free public performances on social issues. He also refashioned the building into a gallery and history museum.

“It was my idea to put art exhibitions here to make it alive. And I was right. People are coming every day — children, students, groups from the Society for the Protection of Nature. Tomorrow, 11 groups of children are coming to hear my lecture about the place and about the art. It suits my belief in recycling,” says Polak.

“I adopted Ahad Ha’am’s philosophy that without the past we do not have a future and without the future we don’t have a past. You have to combine them all the time. Really, this is what I am doing.”

His parents, Moshe and Miriam, live near Polak and his wife, Iris; son Omer and his wife live in Tel Aviv. Polak spends much time with his toddler granddaughter, Ella Gil, “one amazing angel who changed my life totally.”

But grandfathering doesn’t keep him from his mission. “I want to bring more people into a dialogue with creativity,” says Polak, a lifetime activist in bridging religious-secular and Jewish-Arab divides. “I want to convince more businesses and organizations to use art and creative processes to change minds and policies. My own experience is that you don’t need a lot of means to achieve an understanding of people.”