A Philippine woman gave birth over the weekend in the IDF field hospital in Bogo City on Cebu Island, and called her son “Israel” to thank the Israeli army’s gynecology team. The IDF set up the field hospital in the Typhoon Haiyan-hit area to help care for the local population affected by the devastating storm.

“We choose the name ‘Israel’ as just saying thank you to the Israeli people,” said Audrin Antigua, holding her newborn son. “Thank you so much.” 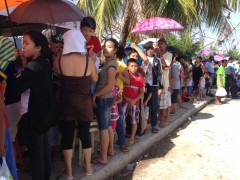 Long lines have become a common sight outside the IDF field hospital since its opening.
Bogo City Mayor Celestino Martinez Jr. said: “The typhoon destroyed everything we have here, from infrastructure to agriculture.”

The Israeli medic team has received high praise for its work in the Philippines so far. As of Saturday evening (November 16), the field hospital treated 370 patients, including 150 children, reported the Ministry of Foreign Affairs.

“The field hospital capacity that the Israelis can mobilize is top class, and we have seen it very, very effectively in many other crises as well,” John Ging, a top UN humanitarian official, told ABC News.

Dr. Nancy Snyderman, an NBC correspondent, wrote a long piece on Israel’s humanitarian work. “I asked the IDF Surgeon General in charge why they chose Bogo. He said it was because they were poor and their needs were great. As I left, I walked away in awe of this group of doctors: physician humanitarians, and medicine at its very best,” she wrote.