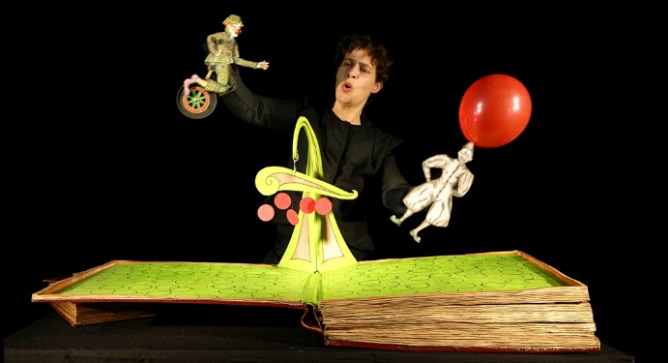 Just about every week somewhere around the world a new puppet festival kicks off. With so much competition, one might think the Jerusalem International Festival of Puppet Theater would have a hard time selling itself.

Known for their creativity and innovation in the art style, Israeli puppetry artists and object theater practitioners are a big draw for international fans and sought after by festival organizers from across the globe.

“We don’t have a tradition of this art form in Israel. We didn’t grow up on Punch & Judy. And because there is no tradition, Israelis can create a new language in puppetry,” Dalia Yaffe-Maayan, director of the Train Theater, tells ISRAEL21c. “Israeli puppeteers are known as being very independent, creative and sophisticated with lots of surprises. We are invited abroad a lot.”

The Train Theater initiated the International Festival of Puppet Theater in 1983. Since 2001, it has become an annual event, taking place every August in Jerusalem.

The 2012 line-up for the August 5-10 happening includes Israeli productions alongside shows from Belgium, England, France, Spain, Switzerland, Italy, Hungary and The Netherlands. Festival directors from the Czech Republic, Germany, Scotland, Slovenia, India, Latvia and Denmark will also be in town as part of the festival’s International Exposure Program.

“The world is very excited by our young artists,” says Yaffe-Maayan. The festival usually attracts some 10,000 paying audience members.

Spotlight on the puppeteer

Puppeteers usually take second seat to their puppets. But like all ancient arts, puppetry has changed over the years as it has become more modernized and the latest trend is to see the Strombolis of the world.

“In the last few festivals, the puppeteer has come into the frame of the show. The relationship between the puppet and the puppeteer is no less important; it’s part of what is going on in the show,” explains Yaffe-Maayan.

The language of puppet theater has also changed.

“It used to be a puppet or marionette or a shadow or glove puppet. Today it can be an image or an object. Something that gets life from the puppeteer that is not necessarily a puppet. It can be a book or a piece of paper,” Yaffe-Maayan says. “Puppetry is about animating inanimate performing objects. It’s a visual art and Israelis are very strong in visual performance.”

In fact, this isn’t the only puppet festival in Israel. The Holon Puppet Theater Center has hosted an International Puppet Theater and Film Festival every July since 1995.

There are 38 original productions taking the stage at the upcoming festival. Whereas other puppetry festivals earmark their shows for either the family audience or for adults, the International Festival of Puppet Theater in Jerusalem is unique in that its repertoire is aimed at both.

“This is our specialty,” says Yaffe-Maayan, “we do one festival for both categories of audiences.”

Yaffe-Maayan says the outdoor shows known as SABRA give audiences a window on the young original local creation being cultivated here. These free-of-charge performances will take place in the yard of the nearby Khan Theater every evening throughout the festival, and typically attract a few thousand people.

“The uniqueness of the festival lies in the exposure of challenging, intriguing and diverse creations, with a rich visual language, a true celebration to the soul and a feast for the eyes,” said Israeli Sports and Culture Minister Limor Livnat.

And while the stigma that puppetry is only for kids is still prevalent in Israel, Yaffe-Maayan says the field is maturing and gaining better acceptance for adults.

The Israeli/Swiss co-production, Savanna, is one example of the adult-oriented performances at this year’s event. The show takes the form of a series of episodes: the chaos of an angry monkey, the sophisticated and intimate culture of elephants and the ecstasy of a flock of birds in flight. The performance uses objects, live sound and video manipulation.

“If you create shows for adults, then every year more people will look for the experience,” says Yaffe-Maayan.

Moreover, many of the shows are solely visual so as to transcend language barriers. From Yaffe-Maayan’s point of view, it’s more than a puppet festival — it’s “another way of seeing Israel.”

UNCOVER ISRAEL - Get the ISRAEL21c
Weekly Edition free by email
Sign Up Now!
Bring Israel's story to life.
Millions of people around the world rely on us to gain a deeper understanding of Israel. We are the trusted source for original content you won't find anywhere else.
You can make a difference. Donate today to support journalism that brings Israel’s story alive.
SUPPORT ISRAEL21c
Read more on:   Culture, Entertainment, Jerusalem, International Festival of Puppet Theater