It seems that timing really is everything. A new Israel-US collaborative study shows that obesity may not depend on what you eat, but when you eat it. 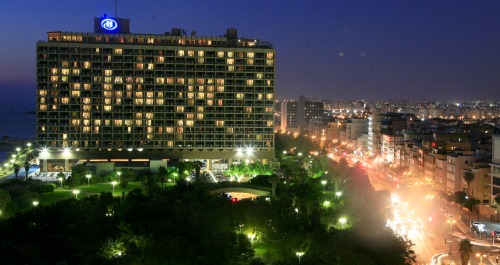 Photo by Moshe Shai/Flash90.
Artificial light at night is already considered carcinogenic, now researchers believe it may be connected to obesity as well.

Obesity is not necessarily related to the amount of food eaten or to physical activity, but rather to when you eat, according to a new study at Ohio State University in collaboration with Prof. Abraham Haim of the University of Haifa. Timing appears to be the key, with the discovery that exposure to artificial Light at Night (LAN) could cause obesity.

“We have already found that there is a connection between artificial light and cancer; now we have revealed additional negative effects of exposure to Light at Night (LAN). It is a cause of environmental pollution that spreads like wildfire,” says Haim, who heads the Center for Interdisciplinary Chronobiological Research at the University of Haifa.

Obesity is a growing problem around both the industrialized and developing world. According to the World Health Organization, globally there are more than one billion overweight adults, and at least 300 million of them are clinically obese.

Much emphasis has been placed on factors such as bad eating habits and insufficient physical activity to explain the growing phenomenon of obesity around the world. But researchers have recently begun to find a connection between weight gain and disturbed circadian cycles – which are regulated by the biological clock that is entrained each day by cyclical time indicators, such as sunrise and sunset.

According to Haim, since exposure to artificial LAN cancels out the sun’s natural setting time, the body’s continuous exposure to high levels of light disrupts the biological clock and thereby damages the circadian regulation of body cells, tissue, organs and systems.

The researchers of the present study set out to examine how disruption of the body’s circadian system affects obesity in industrialized countries. Leading the study was doctoral student Laura K. Fonken at Prof. Randy J. Nelson’s neuroscience lab at Ohio State University. The results were published in the Proceedings of the National Academy of Science (PNAS) Online Early Edition.

The results show that the mice experiencing dimmed light and those exposed to 24 hours of light gained about 12 grams of body mass, while the mice exposed to the “regular day” only put on about eight grams of extra body mass – close to 50 percent less than the others.

The researchers observed that there was no difference in the amounts of food that all the mice ate, or in the extent of physical activity (monitored as locomotor activity). The lab tests also showed drastically reduced glucose tolerance in those mice exposed to LAN.

Another finding, which led to the second stage of the study, showed a significant difference between the groups in their timing of eating: The mice exposed to dimmed light ate 55% of their food during the “night” hours while those experiencing “regular days” ate only 36.5% of their food at night. This prompted the researchers to see whether this was the cause of the marked differences in body mass gain.

Nighttime TV can cause obesity

Once eating was limited to daytime only (which is when mice normally eat their food) or nighttime only (when they do not normally eat), there was no difference in body mass weight gain between the groups.

Haim explains that the study strengthens earlier findings by other researchers showing that exposure to LAN interferes with the production of melatonin – a hormone produced in the pineal gland in the brain under dark conditions at night. This interference causes changes in the body’s cyclical functions and is what caused the mice to eat at abnormal hours.

“Our study shows that watching TV at night can cause obesity, not only due to inactivity and overeating, but also because it upsets the body’s natural daily cycle. Chapter three of Ecclesiastes says: ‘Everything has an appointed season, and there is a time for every matter under the heaven.’ Edison’s technology ended the era of ‘darkness’, but following that we created a new environmental polluter that contaminates environmental time factors,” says Haim.

Haim does not suggest that we switch off the lights and return to life without the light bulb. But he does recommend that we remain aware of the problems and pollution that LAN generates, and of the need to take appropriate steps – with the help of comprehensive studies – as countries with a high awareness of the environment have begun to do.

The study was partially funded by the United States-Israel Binational Science Foundation (BSF).