Tel Aviv University chemists have a patented device that detects even small amounts of ‘date-rape drugs’ lurking in a beverage. 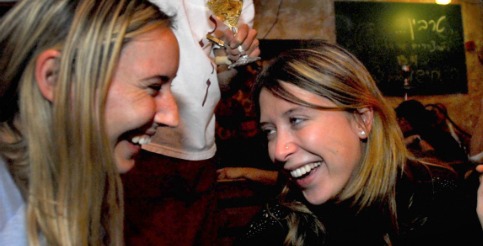 Photo by Flash 90
No more worries about “date-rape drugs.”

“Date rape” of teens and young adults sedated with drug-laced alcoholic beverages at parties, clubs and bars is a growing crime the world over. According to US Department of Justice data, in 2007 some 200,000 American women complained of sexual assault after unknowingly ingesting sedative and/or amnesiac substances slipped into their drinks. Experts believe incidents actually number close to half a million per year in the United States.

Tel Aviv University researchers have developed a weapon against this frightening phenomenon: a 100 percent accurate sensor that provides a visual signal when it detects the presence of the most common date-rape drugs.

They are working to miniaturize their invention for mass production and marketing, so that in the future anyone could slip it into a pocket or purse before entering a situation where they could find themselves in danger.

Prof. Fernando Patolsky and Dr. Michael Ioffe of the School of Chemistry in Tel Aviv University’s Sackler Faculty of Exact Sciences say the sensor can pick up on the presence of even tiny amounts of the date-rape drugs GHB and ketamine in beverages. Though potent, these substances are colorless, tasteless and odorless.

Patolsky and Ioffe tested their system with the help of professional bartenders, who prepared a variety of cocktails and randomly laced 50 of the drinks with the common date-rape drugs. In a blind test, the system successfully detected the drugs in all 50 drinks, with no false-positive readings.

Ioffe and Patolsky have patented all elements of the invention through the university’s technology transfer company, Ramot. According to Patolsky, the goal is to mass manufacture a device no larger than the head of a pin, so that club-goers could check their drinks without anyone noticing.

“We are hoping to expand the system so that it will detect additional date-rape drugs as well,” Ioffe said.

These same types of narcotics are sometimes used to stun and sedate victims in other kinds of criminal acts, such as robbery.

The researchers noted that law-enforcement and healthcare personnel cannot do much to prevent or even prove date-rape drugging because these substances become undetectable after several hours — even before victims regain consciousness. They hope their device will be able to thwart drug-facilitated sexual assault by enabling potential victims to protect themselves from ingesting them in the first place.