Seven tots and their parents or caregivers are doing the hokey-pokey (in Hebrew, of course) at a Jerusalem playgroup. It’s just like any other Mommy & Me gathering except that all the little ones are attached to portable ventilators and have never been outside a hospital setting. They, and their parents, are in training for life at home.

Instead of waiting in their hospital beds for therapists to visit, respiratory rehabilitation patients under three years old at ALYN Hospital — the Middle East’s only comprehensive pediatric rehab center — gather with caregivers in the middle of the ward every day from 9:30am to 1pm.

“A couple of years ago we started realizing that a lot of these children have never been home, so their social development is lacking. And you can’t teach that to a child one on one. So we shifted to a model of doing all therapies in a deformalized group setting,” says department head Dr. Eliezer Be’eri. 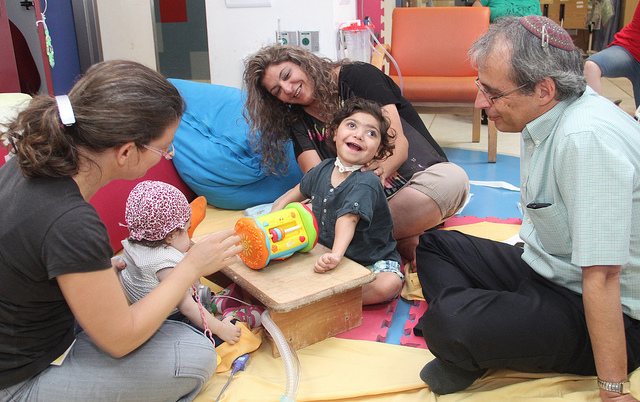 Be’eri with young patients and their mothers.

Because babies develop best when allowed to interact with parents sitting on the floor, ALYN remodeled the respiratory department about 18 months ago to provide enough floor space for the kids, therapists, parents and breathing apparatus. Allowing medically fragile children out of bed for hours every day is unprecedented.

“We’ve now become a kind of ICU with a playground in the middle,” Be’eri tells ISRAEL21c. “It’s a model I’m not aware of anywhere else in the world. The therapists are there to guide the parents in what each child needs to work on, and nurses are monitoring every child, but in an informal setting that we’ve found is much more effective.”

‘They can do what other children do’

The children in this 19-bed ward have been transferred from ICU departments in Israel and elsewhere. There are Jewish and Arab patients and even some from outside Israel – victims of accidents, violence, illness or genetic disease. The older kids attend the in-hospital school that serves 90 inpatient and outpatient children.

The youngest patients, often ventilated since birth due to paralysis or low muscle tone, spend months in the ward until they can breathe on their own or until their home and school environment is ready to accommodate their ongoing ventilation needs.

Along with occupational, physical and communication therapies, the kids need social rehabilitation to learn their place in society, Be’eri believes. The family, school and greater community also need “rehab” to properly welcome the child. “If they haven’t got all of that, what is the value of getting them off the ventilator?”

Be’eri recently lectured at Peking University Hospital in China, which has the largest pediatric department in Beijing.

“I showed them how we put ventilated children in the swimming pool. Hydrotherapy will not make a paralyzed child better, but this is an experience they wouldn’t get otherwise. It’s a message that they can do what other children do.”

The Chinese doctors had never even conceived of putting a child long term on ventilation, let alone in a pool.

“Even in Western countries like Australia and the UK, chronically ill children are often not given ventilation when their muscles degenerate,” Be’eri explains. “The culture is to let nature take its course. We are much more aggressive here. I think it’s an issue of Jewish culture; you shout and object rather than accept your lot.”

ALYN is not only pioneering a social approach to therapy but is reframing the overall picture of good health.

“A hundred years ago, the definition of health was lack of disease,” says Be’eri. “Later, the World Health Organization defined health as a state of physical, emotional and social well-being. Today, a new definition of health is emerging: it is the ability to self-manage and adapt to changes around you.”

Anybody successfully managing with the aid of technology – whether it’s an iPad or a wheelchair or a ventilator – therefore can be considered healthy. 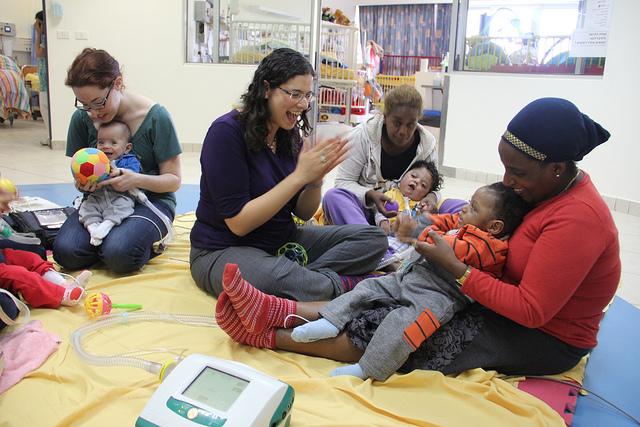 Tots on ventilators come from all segments of society.

“We’ve gone beyond the idea that if you’re dependent on technology you’re not healthy. We all use technology,” Be’eri points out. “If a patient has to be on a ventilator, my job as a doctor is to help them learn how to self-manage and adapt. And we have to teach the parents, and give them the right tools and equipment.”

In the course of the group sessions, parents, grandparents and caregivers learn how to use the portable ventilation and monitoring equipment.

“The biggest hurdle to discharge a child like this is the parent’s psychological barrier,” he says. “When a child is in an ICU, the parent cannot function as a parent. Often, we encounter parents who have never dressed or bathed their child, never mind give them medications and monitor them. We have to return to them the responsibility of being a parent. They can, and need, to do it.”

Once a year, the respiratory rehab staff takes the entire unit to the Jerusalem Zoo, mainly to show mothers and fathers that they can enjoy their child outside the hospital setting, says Be’eri.

Head nurse Inga Pachima tells ISRAEL21c that one of the moms happily hokey-pokeying with her baby was at first resistant to participating in the group.

“She was fearful of her child coming into contact with other children; she was afraid of infections. So she preferred to stay in the room,” says Pachima. “This morning, she said she wanted to take him to group therapy and it’s lovely. Here they see other kids and other parents, and it’s really much better. For the parents, going through this with other people helps them understand they are not alone.”