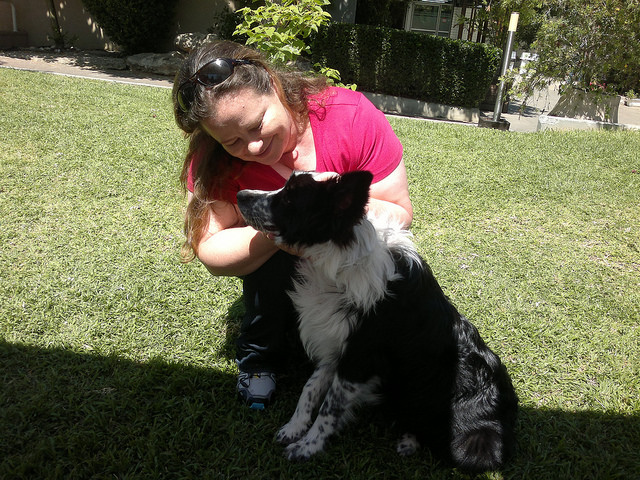 Einav Gissinger and Nelson on the final day of the dog therapy course at Broshim. Photo by Abigail Klein Leichman.

Einav Gissinger and Nelson on the final day of the dog therapy course at Broshim. Photo by Abigail Klein Leichman.

Nelson is an energetic black-and-white border collie with a serious job to do.

He accompanies his “mom”, Einav Gissinger, to a battered women’s shelter where she co-leads sessions for children aged three to six and a half. This is Gissinger’s internship for her dog therapy certification program at the Broshim Campus for Integrative Medicine at Tel Aviv University.

“The shelter is a very rewarding and very hard place to work,” Gissinger tells ISRAEL21c on the final day of the 600-hour course.

“The kids have absorbed all the difficult things their mothers have been through. We have 12 meetings with them during the time they are in the shelter. We bring Nelson, who’s kind of hyperactive, and my partner’s calm female Yorkshire terrier. It is very important for the kids to have this mix. Most are afraid of the dogs at first, and her dog is more approachable. They eventually work up to meeting my dog.”

Guided by the therapists, the kids learn to observe emotions expressed in the dog’s body language. Why does the pooch seem happy, anxious or afraid? Without words, they cannot know. The dog therefore serves as a springboard for the children to progress toward verbalizing their own feelings.

“These children hit a lot because of all the violence in their lives,” says Gissinger. “We talk about the importance of alternative ways to express feelings verbally.”

And that’s when the healing starts to happen. Kids begin learning to express emotions in healthier ways. Children without a remaining shred of trust dare to open their hearts.

Dogs are a powerful therapeutic tool, says Ofer Biton, a dog trainer and special-education counselor who devised the course as the first of its kind in Israel, eight years ago. Now there are about 20 other canine therapy courses, but the original one at Broshim is the largest, graduating 80 students per year, and serves as a model for others.

“It started when I was counseling abused youth in a residential facility and I would often bring my dog along,” Biton tells ISRAEL21c. “I saw how much it helped in my work with the children, and I realized I wanted to start a business training therapy dogs for children in difficult situations. There was no program to do that.”

Biton says the presence of a dog works wonders.

“These are children who do not trust people. Anything an adult asks them, even ‘how are you?’ makes them suspicious and afraid because they have been hurt by adults and let down by adults.”

Yet when Biton approached the children accompanied by his dog, they let down their guard.

“It was a person, not a dog, who hurt them or abandoned them,” Biton explains. “The dog is neutral, and because I am accompanying the dog, I am seen as more trustworthy.”

The therapy dogs are helpful not only for children. For example, later this month graduates of the Broshim course will take their dogs to Sheba Medical Center in Tel Hashomer to care for wounded soldiers’ families and the hospital staff caring for casualties from Operation Protective Edge.

Biton designed the course to encompass both dog training and human psychology. Veterinarians and dog handlers instruct during the first half, and youth social workers during the second half. Canine training is presented as a valuable tool for therapeutic work, and also gives the students another marketable skill.

Toward the end of the course, the students put it all together in practical settings. Though many choose to work with teens at risk or children with autism, Biton encourages them to consider other populations, such as prisoners. He believes in expanding this approach.

“Animal therapy is very popular in the United States, but mostly only in hospitals and nursing homes,” he points out.

Any dog will do

“We just need dogs that have life in their eyes; that run here and there, just like children,” he says.

“We had a very hyper boy at the shelter who fell in love with Nelson,” relates Gissinger, the mother of two preschoolers. “The bonding between them was really amazing. The boy used to wander around during sessions, but petting the dog and giving him treats kept him focused. By the end, he was hugging and kissing Nelson, and all he talked about was that his mom would get him a dog when they left the shelter. We talked to his mom about it and tried to make sure this will happen.”

Like many others in the Broshim dog therapy course, Gissinger came from a different field. For about 13 years, she directed news, sports and cooking TV shows but was looking for a way to give back to the community.

“I love dogs and I found out about this profession three or four years ago. After my younger child was born, I decided it was a good point to make a change and I came across Broshim. Another producer I know was in the program a year before me.”

Through her internship at the shelter, she’s even learned some tips to use at home.

“One very troubled boy was disturbing everyone, and his social worker offered to have someone handling him during our sessions. After speaking with Ofer, we decided not to do that, because this is the way he is used to being handled in kindergarten and in the shelter. We wanted to try and give him a different experience.”

In the end, this child connected with the dogs more than anyone else.

“It was really special for us, since we are both mothers and we have our ways of disciplining our children,” says Gissinger. “It really changed the way we think about the whole practice.”