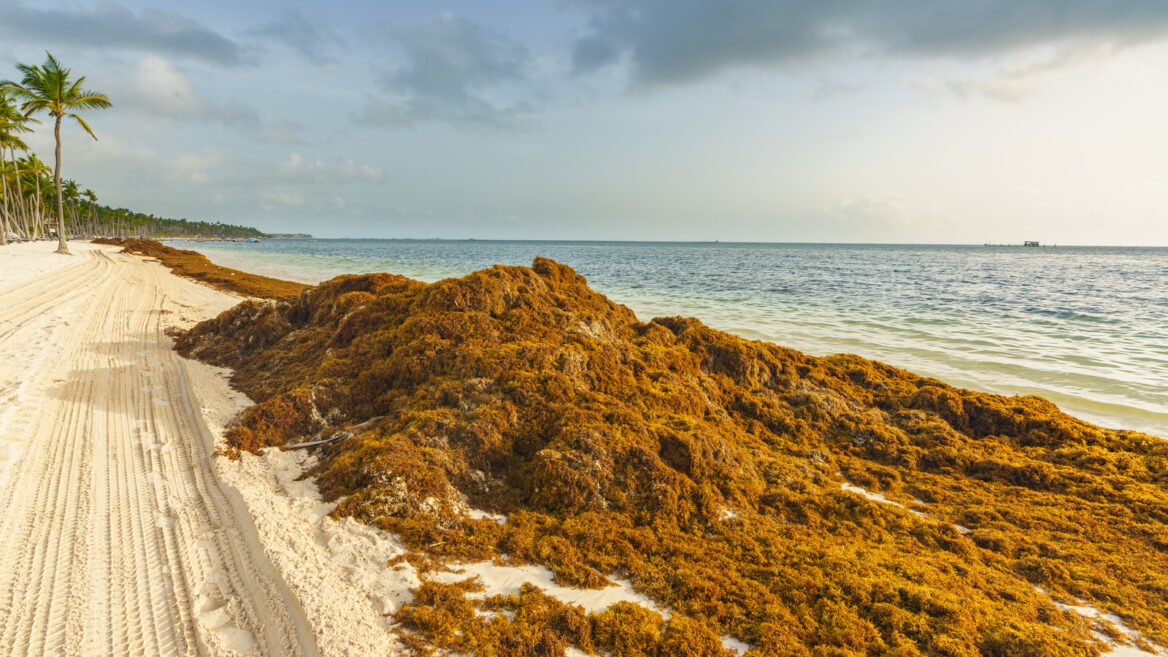 Brown seaweed is a grave concern for an economy that relies on tourism and the Caribbean’s famously clear waters. Photo by S.Borisov via Shutterstock.com

Israeli businessman and entrepreneur Ygdal Ach was vacationing with his family in the town of Punta Cana in the Dominican Republic when he came across a disturbing sight – huge amounts of smelly brown seaweed scattered all over the shoreline, marring what otherwise would be a perfect beach experience.

“When we got there, we were all waiting to see the amazing beaches and the clear waters. When we woke up the following morning, we suddenly saw that the beach is full of brown seaweed that smells bad, and my youngest daughter wasn’t willing to get in the water,” he recounts. “We were all very disappointed with the situation and I tried to understand what was going on there.” 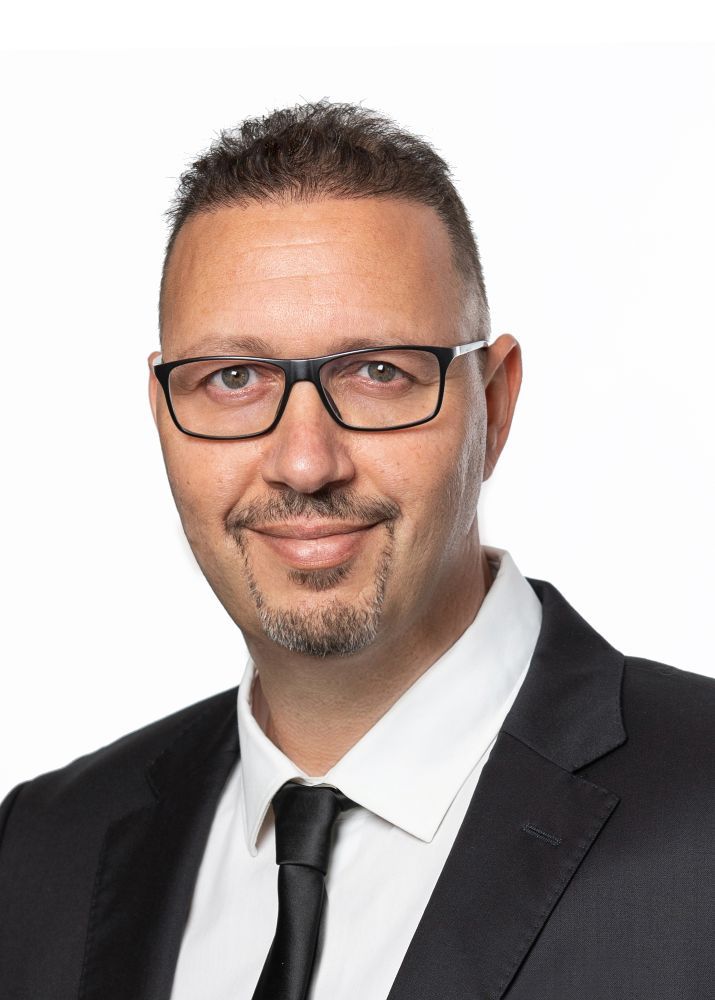 Ach is the founder and CEO of Y.A. Maof, an Israeli company that works on environmental and waste disposal projects.

As such, when he went out on his morning run, he asked the resort employees who were busy shoveling the seaweed off the beach what they do with it. He was aghast to learn that the seaweed was being taken to a local dumpster where it was left to dry before being burned.

A boat ride and tour confirmed the magnitude of the algae problem, he says.

Intrigued, he decided to investigate the situation further.“I took a bag and filled it with seaweed and I brought it to Israel, but only after my wife told me not to dare put it in her luggage.” 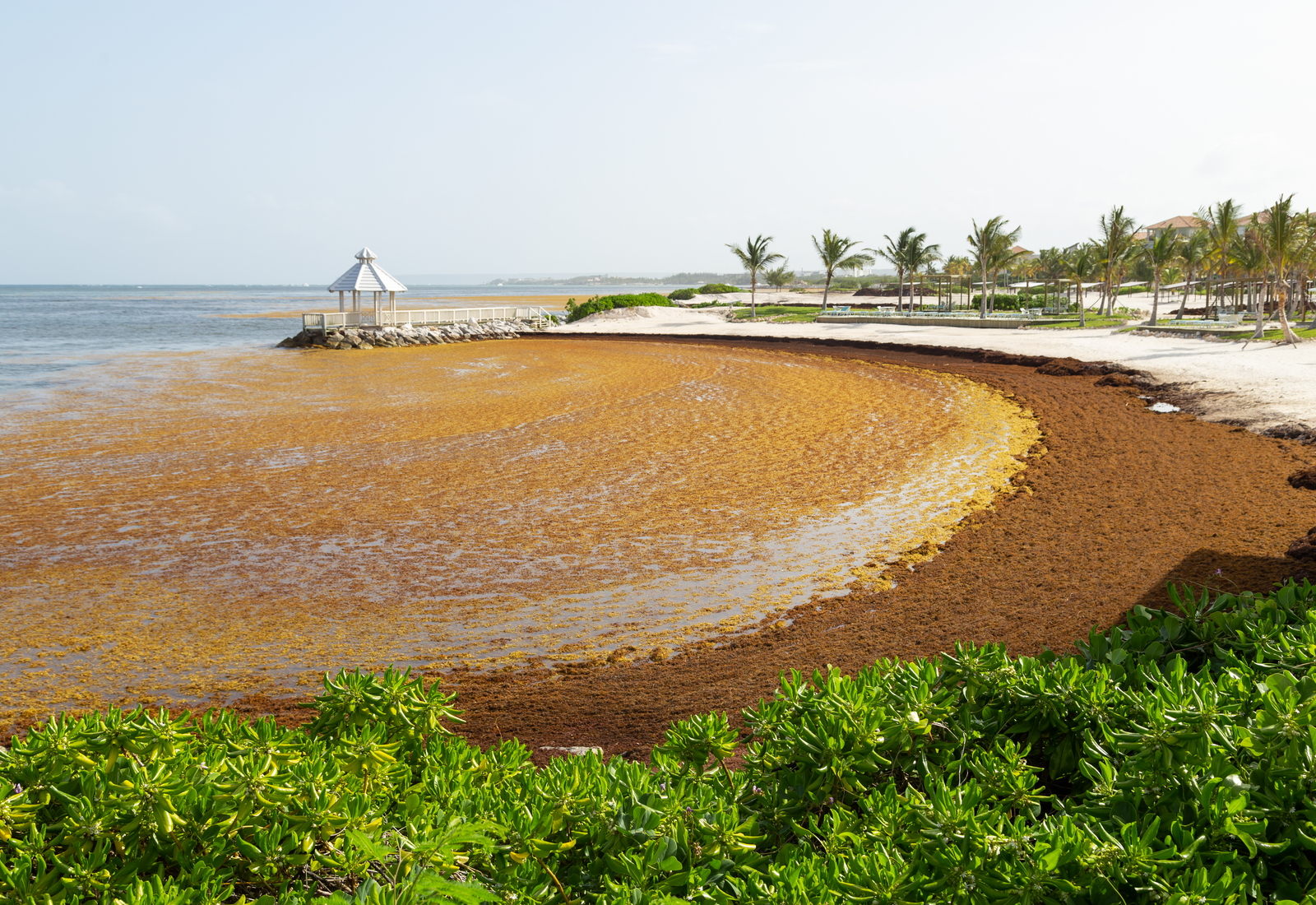 Piles of sargassum seaweed blot the beaches of resorts in Punta Cana in the Dominican Republic. Photo by Iren Key via Shutterstock.com

On the flight back to Israel, he read up on the situation and learned of the Atlantic Sargassum Belt, patches of seaweed bloom that stretch from off the coast of western Africa all the way to the Caribbean and Latin America.

Unusually large patches of sargassum began appearing in 2011, and scientists believe that they’re the result of nutrients that are pumped into the ocean and perhaps also global warming.

In any case, the large sargassum patches that clog up the waters make life difficult for some marine animals, for fishermen and for tourist industries that rely on pristine waters.

Ach sent the algae he brought over to Israel for some test labs. He and his team concluded that combining the algae with organic waste in a biogas facility could enable energy generation.

He then got in touch with Israel’s ambassador to the Dominican Republic, who introduced him to the leading local technological university with which he’s been collaborating ever since.

Ach recruited a resorts corporation and an energy group to set up an experimental project, as well as Scholas, Pope Francis’ international educational initiative, to accompany the project on the communal impact and environmental education side of things. 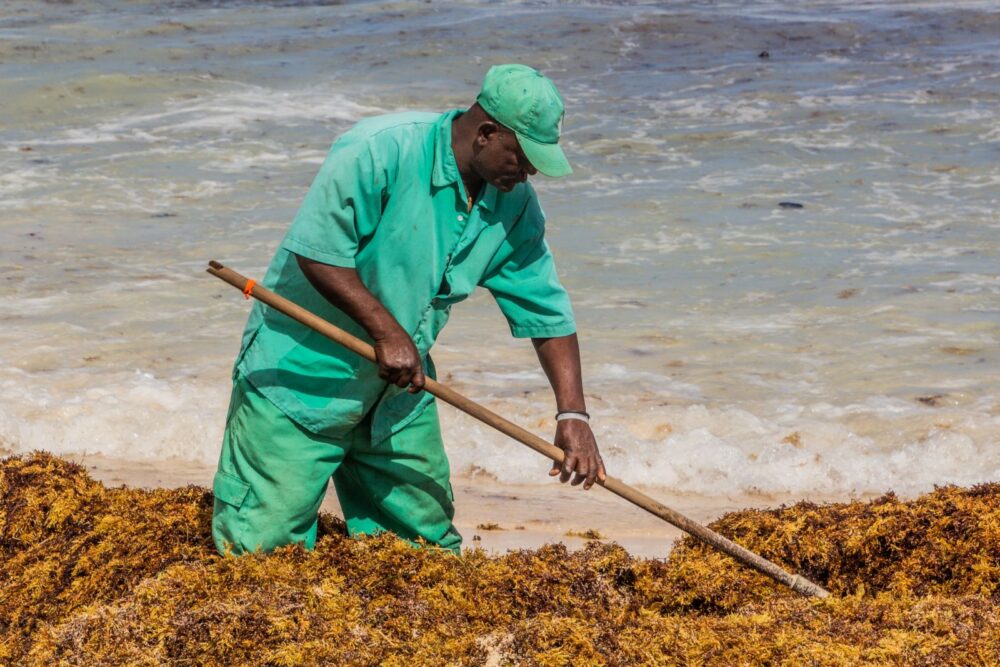 Large sargassum patches clog up the water and make life difficult for some marine animals, for fishermen and for tourist industries. Photo by Matyas Rehak via Shutterstock.com

Right now, the project is in financial review and Ach estimates that the biogas facility will be ready in two years’ time.

The plan is to collect the brown algae and transport it to the facility, where it will be combined with organic home waste. The methane gas that will be created will then be transported to a biological generator and from there to the power grid, where it will serve the local hotel industry.

“The whole concept that we’ve created here is building a platform for impact investing,” Ach explains. “It’s a chain that begins with collecting seaweed at sea and ends with three products: electricity, compost and fertilizer.”

The coronavirus crisis, he notes, hasn’t impeded the project even though it’s being carried out on the other side of the world. “First of all, everything’s on Zoom now and you don’t need to waste time on flying,” he jokes.

“Covid has also made us see things differently,” he adds. “Not only are we bringing renewable energy solutions and minimizing CO2 emissions, but we’re also creating workplaces. That’s what interests the different authorities and countries.”

Y.A. Maof is also working on other environmental and waste management projects with authorities and universities in Israel and Latin America. Ach acknowledges that Israeli knowhow is what gives them their edge.

“In terms of knowledge and experience and everything that has to do with environmental technology, I think that we’re world leaders,” he notes.

“This whole concept of building up a professional workforce, building systems and managing them, that’s something we can bring to the world.”