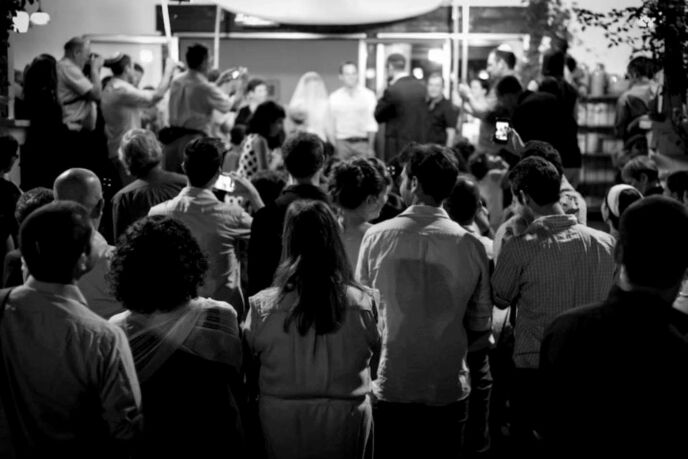 Two Israeli women who run a blog on wedding fashions — graphic artist Tal Maor-Zingerman and architect Hadar Melamed-Richter – believe love can conquer all. They formed a group called Tzeva Lavan L’Zugot HaDarom (Code White for Couples from the South) to salvage shattered wedding dreams of brides and grooms whose nuptials had to be canceled due to the barrage of missiles from Gaza.

According to a report by the Tazpit News Service, the women launched a Facebook page where engaged couples from the South can find wedding-service providers willing to offer substantial discounts in safer regions. Not only professionals but also regular Israelis are getting on the Tzeva Lavan bandwagon by volunteering their own homes and help in this busy wedding season.

Reportedly, the group (named in a play on the Tzeva Adom “Code Red” alert sounded in advance of incoming rockets) is getting tons of requests from beleaguered couples because Israel’s Home Front Command has forbidden gatherings of more than 40 people in areas at high risk.

Mor-Zingerman and Melamed-Richter aren’t the only ones repairing broken wedding plans.

The 30-year-old nonprofit organization Chasdei Naomi, which runs six wedding halls for impoverished couples in Bnei Brak and Jerusalem, announced that it will make these halls available free of charge to residents from the South for daytime weddings. The organization’s volunteers also are giving logistical assistance, such as calling guests to inform them of the change of venue.

Chasdei Naomi chairman Rabbi Yosef Cohen said: “There is north and there is south, but just a single Jewish heart that cares for others and embraces them; and so our volunteers are determined to do whatever they can to make things easier.”

In Jerusalem, City Councilman Hanan Rubin arranged for an at-cost wedding at a local hall for Kiryat Gat couple Oriel and Vered Cohen on July 10, after hearing of their distress in a media report about the cancelled affair. “They said they had to find another place, so I called them, introduced myself and said I would do anything I can to help them as a Jerusalem councilman,” Rubin told The Jerusalem Post.

The owners of La Gondola wedding hall put together a wedding for the Cohens’ 350 guests, at no profit, within 48 hours.