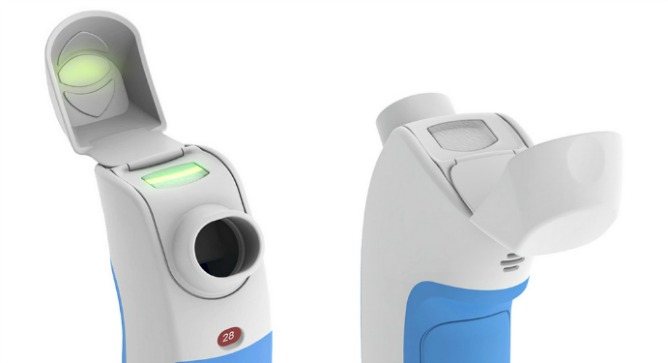 An Israeli father from Modi’in was so determined to find a better way to deliver his young son’s asthma medication that he started a new company to do it.

Kaufmann, who already had 10 years of experience in medical devices research and development, tells ISRAEL21c that he felt frustrated when using a bulky nebulizer machine to treat his preschooler’s asthma.

Nebulizers are effective, but they require the parent to prepare the dose of liquid medication and take a long time to deliver it to a squirming child. Kaufmann knew that dry powder inhalers do a better, faster job with less risk of error and contamination, but small children – as well as very ill people, the elderly and those with certain disabilities – cannot use them properly.

“You must inhale a certain volume, not too fast and not too slow. It’s not simple,” he says.

Kaufmann and Steuer joined forces to create a “smart” dry powder inhaler with several key advantages over existing models. Its internal microcontroller and flow sensor detect the right time to deliver the medication and automatically disperse the drug particles in the right size without need for forceful inhalation.

It provides instant feedback in the form of a green light or red light to indicate if the patient is inhaling correctly, and a beeper when the whole dose has been delivered.

In a boon for doctors, the Inspiromatic also stores information that takes the guesswork out of treatment decisions.

“It knows if the patient really inhaled correctly or didn’t, so the physician can access this data and see if the drug was delivered successfully — and if not, why not. This makes it much easier to find the problems and provide solutions,” says Kaufmann.

Inspiro Medical was accepted in late 2010 into Trendlines’ Misgav Venture Accelerator in northern Israel, which specializes in medical, biotech and pharma startups.

After showing good results in the lab over existing dry-powder inhalers, the Inspiromatic is now a step closer to a global market consisting of an estimated 300 million asthmatics and an additional 210 million people suffering from chronic obstructive pulmonary disease (COPD).

“We just got Health Ministry approval for our first clinical trial in Israel within two or three months, and we are in negotiations with several pharma companies,” says Kaufmann.

“This is a drug-device combination product, meaning it must have a [drug] formulation designed to be used with the specific device. We can use generic formulations adapted to our device or we can work with pharma partners to develop new formulations.”

Now Kaufmann is seeking $1 million in investments to develop the device to the point where it can get the European CE Mark of approval, but he stresses that it would still need further approval as a drug-device combination before becoming marketable.

The long-term goal is to get approval in both the European and American markets. By that time, Kaufmann’s son, who is now eight and less affected by the lung condition, may have outgrown his asthma entirely. But there will be plenty of other kids around the world whose parents will be happy to have a device that makes treatment a breeze.

UNCOVER ISRAEL - Get the ISRAEL21c
Weekly Edition free by email
Sign Up Now!
Bring Israel's story to life.
Millions of people around the world rely on us to gain a deeper understanding of Israel. We are the trusted source for original content you won't find anywhere else.
You can make a difference. Donate today to support journalism that brings Israel’s story alive.
SUPPORT ISRAEL21c
Read more on:   Health, Medical devices, Inspiro Medical, medication, Nimrod Kaufmann, Guy Steuer