Color trends may be something you are not even aware of. They seep slowly into your world until they show up in your food, clothing, home decor and more.

Purple has been a presence over the last few years and is set to peak when Lavender Cream becomes Pantone’s color of the year for 2023.

This gentle shade represents wellness, selfcare and digital escapism, according to Pantone – the authority that devises global color trends used by designers and product developers.

In Israel, the Golan Heights is the place to indulge in all things lavender.

Drive northwards from the Sea of Galilee and you will arrive at Moshav Kanaf, where the purple fields look as if they have been lifted from Provence.

While sitting on the terrace of the café at Azizo Lavender Farm, try lavender infused cappuccino, butter biscuits and ice cream or be more adventurous with a slice of pizza topped with dried lavender.

And don’t forget to breathe in the heavenly, slightly medicinal scent that fills the air.

A dream on hold 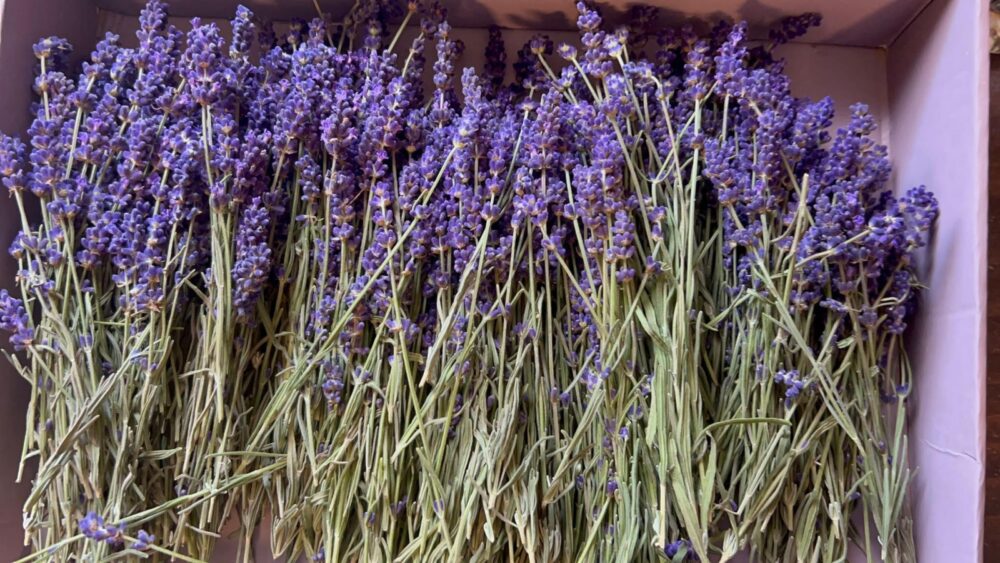 Azizo, founded by Lilach Assraf and her husband, Dan, has over the last 10 years grown into a 60-dunam (14.8-acre) lavender farm.

Their connection to lavender, however, began in 1985 when the young couple from Petah Tikva and a group of friends decided to settle in the lower region of the Golan Heights.

“We intended to make a living through farming. The Jewish Agency adviser who accompanied us asked what we thought we should grow and most of the group said plums or pears as the area is known for fruit farming,” recalls Lilach, whose name is the Hebrew word for “lilac.”

“But he had just returned from Provence and enthusiastically advised us to grow lavender. He had seen how successful it was over there and thought our sunny climate would also provide the same conditions for lavender to thrive.” 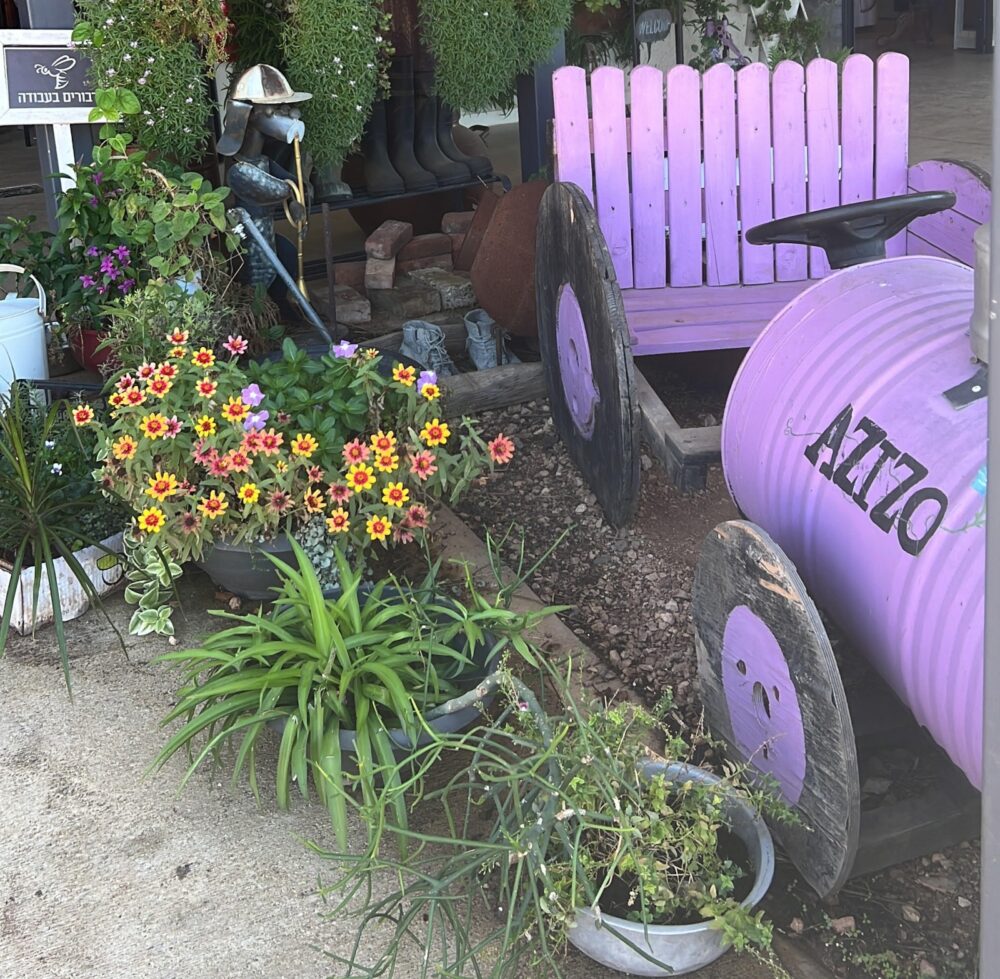 Lavender is the preferred color at Azizo Farm in the Golan Heights. Photo by Lilach Assraf

Unfortunately the weather could not be relied upon, especially for a crop that needs full sun and well-drained soil. The following year, Lilach recounts, was unusually rainy and cold, followed by six years of extremely dry conditions. Ultimately the project never got off the ground.

Nonetheless, the Assrafs decided to build their lives on Moshav Kanaf with its panoramic view over the Sea of Galilee.

Lilach went to work as the manager of an optician store and Dan worked in security for the local council.

Then, 10 years ago, they felt the “vision and dream” of farming lavender resurface and decided this time to plant five dunams (1.2 acres) under the guidance of Prof. Nativ Dudai, head of Medicinal and Aromatic Plants at Newe-Ya’ar Agricultural Research Center.

The couple also traveled to Provence and other countries with long histories of lavender farming. They found their connection with Bulgaria to be the most productive.

“Bulgaria is world famous for its roses, but they are equally specialized in distilling lavender. We bought all our distilling machinery from there,” Lilach tells ISRAEL21c.

The Lavendin Grosso species they chose to farm is a hybrid developed in France.

The name means “fat lavender” as this variety has unusually large and deep violet flower spikes and keeps its color and fragrance when dried. It also attracts bees and butterflies.

“This is what you see growing all over Provence,” says Dudai. “It was also selected as it has the highest yield of enteric oils and therefore is the most profitable to farm.” 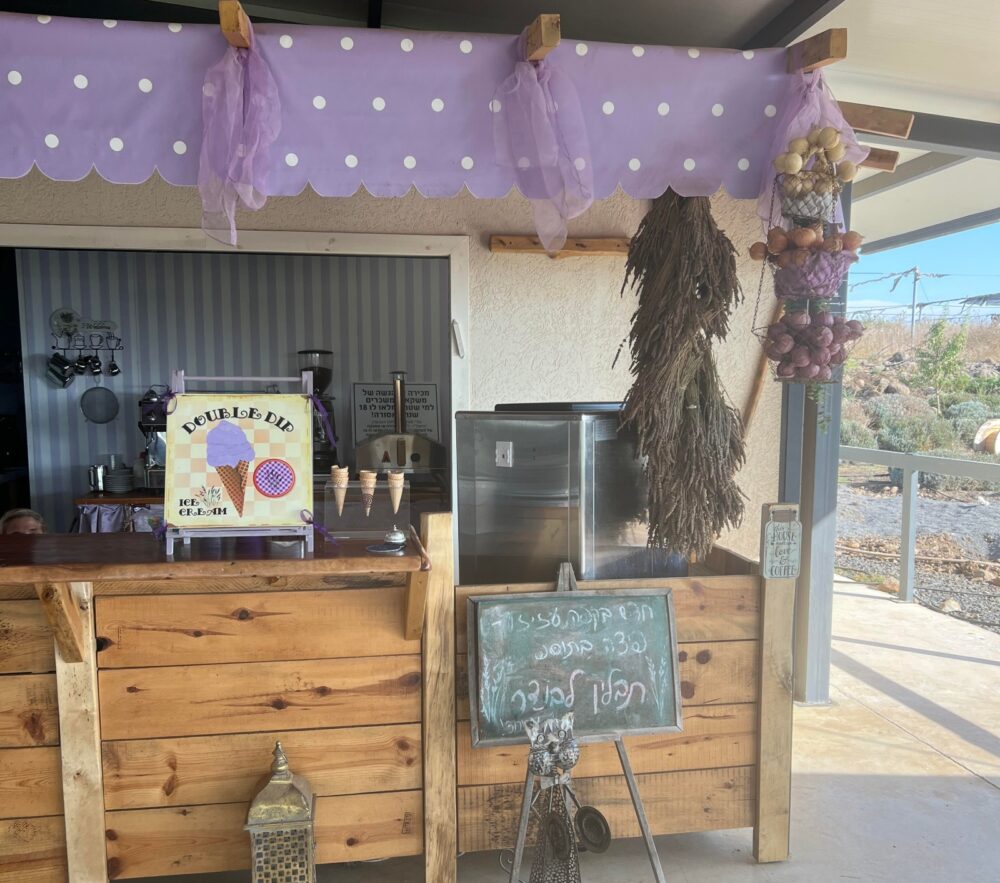 You can get lavender-infused ice cream at Azizo Farm. Photo by Lilach Assraf

The list of uses for lavender oil is long, which is why Lilach refers to it as the “King of essential oils.”

It has proven antiseptic and anti-inflammatory properties, which can help to heal minor burns and bug bites and it is useful in treating anxiety, insomnia and depression. Lavender oil is commonly used in aromatherapy and various topical products such as massage oils and lotions.

Lavender water, produced from steam when the oil separates from the water in the distilling process, is also used as an ingredient in soaps, creams and fragrances.

It is only in the last five years that the Assrafs have been able to give up their day jobs and devote themselves entirely to Azizo, which is named after the sixth century Dir Aziz synagogue excavated nearby.

Besides the income from selling the enteric oils to various industries, the farm is also a successful agro-tourism business that draws visitors year-round for guided tours and to its café and gift shop.

The store is a riot of purple shades with products such as lavender aromatherapy oil, cosmetics, chocolates, jams, liqueurs, dried lavender sachets and lavender honey from Azizo’s own hives. 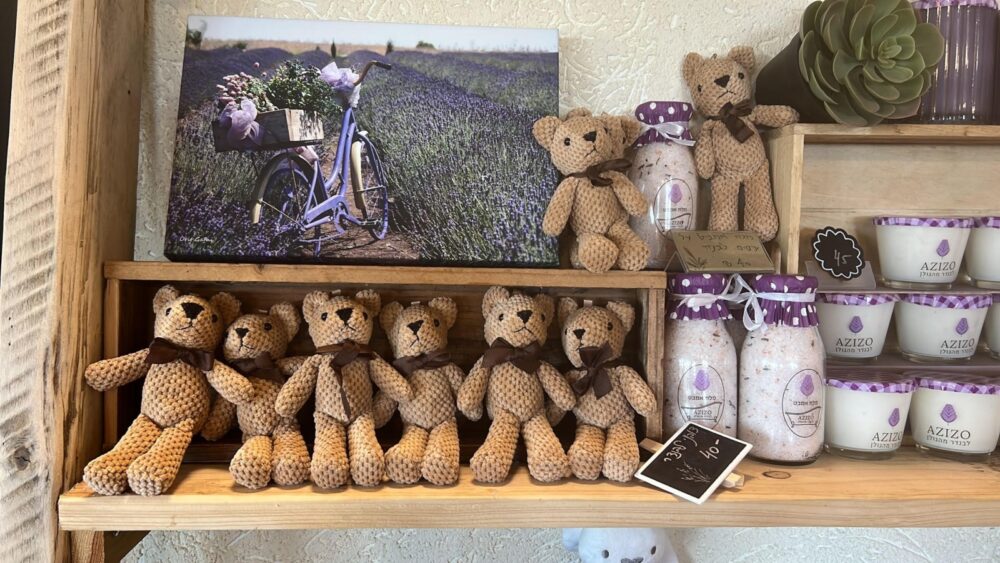 The Azizo model of agro-tourism and a yield of high-quality enteric lavender oil is what Dudai sees as the key to commercial success. His plan, he tells ISRAEL21c, is the creation of multiple lavender farms in the region which will create a route much in the way Napa Valley has done with wineries.

“From May to the end of July, people will come to see the flowering fields at their peak. Then it’s the harvest season and distilling process, which is also interesting to learn about and see firsthand. My vision is to see the Golan Heights painted in purple,” he says.

For a lavender fix in Tel Aviv, there’s lavender cappuccino at Café Barzilai or peach and lavender ice cream at Arta Glidaria.