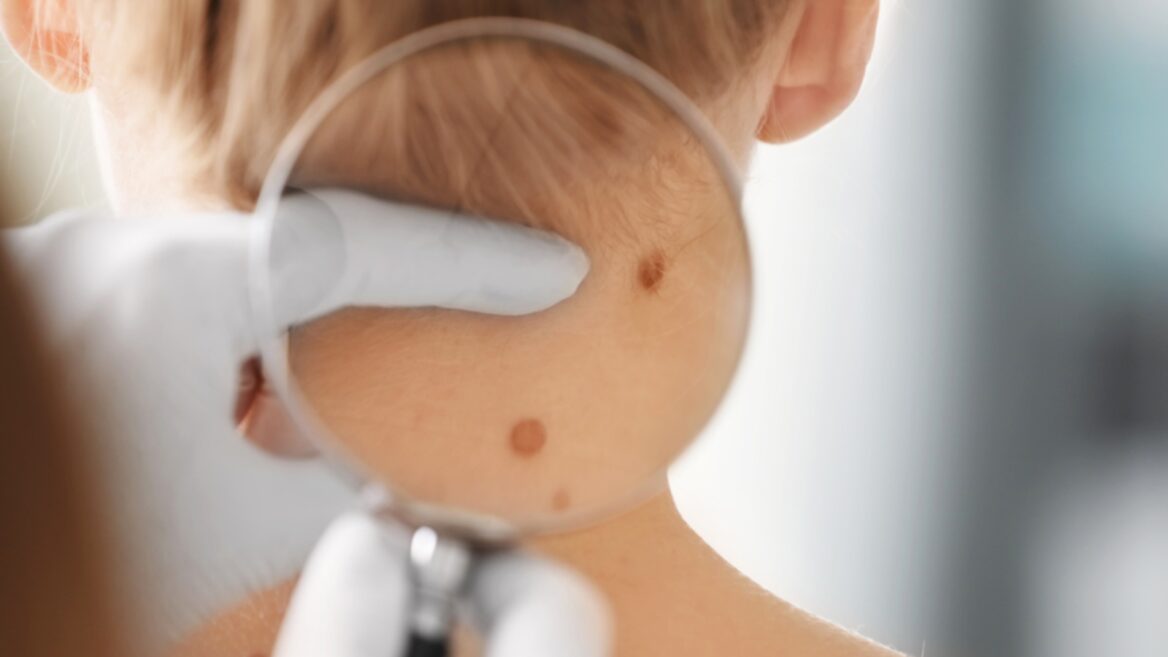 Melanoma is the least common and most lethal form of skin cancer. Image via Shutterstock.com

May is Skin Cancer Awareness Month. And one important fact to be aware of is that the most common skin cancers, basal cell carcinoma and squamous cell carcinoma, aren’t the ones that kill.

The least common variety, melanoma, causes most skin-cancer deaths because it quickly spreads (metastasizes) to other parts of the body.

That’s why many researchers around the world focus on melanoma, so-called because it starts in melanocyte cells that give skin its color.

“We are trying to understand the triggers that cause a melanoma tumor to become metastatic, because that’s the deadly part,” Levy tells ISRAEL21c. “We try to break it down in the skin before it invades the lymph system and spreads around the body.” 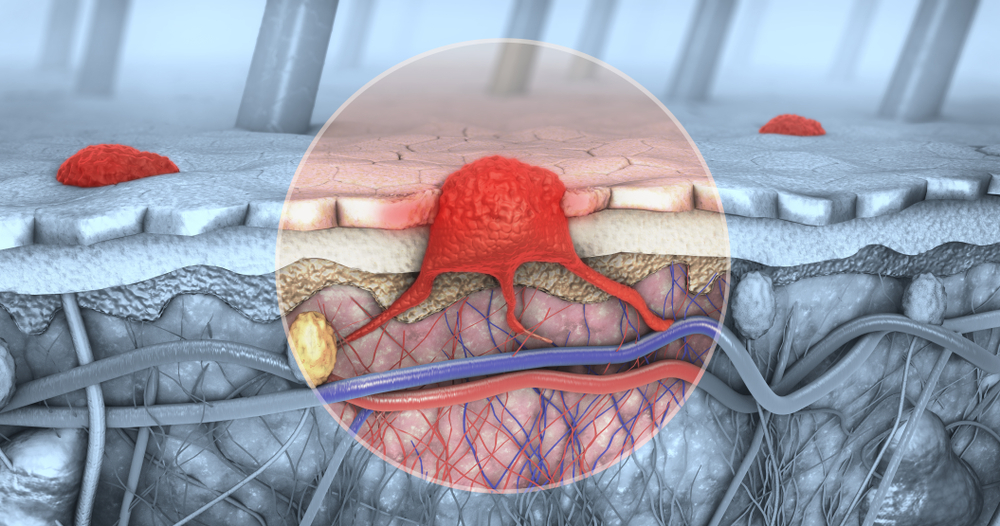 Illustration of a cross-section of melanoma that enters the bloodstream. Photo by Christoph Burgstedt via Shutterstock.com

The rates of melanoma are rising. As of 2018, Australia and New Zealand had the most cases, with the US in 17th place. The American Cancer Society estimates that this year in the United States, about 100,350 new melanomas will be diagnosed and about 6,850 people will die of this aggressive cancer.

Below is a review of groundbreaking melanoma research in Israel.

In 2016, a team of Israeli, European and American researchers, led by Levy, unraveled the metastatic mechanism of melanoma.

They discovered that before spreading to other organs, a melanoma tumor sends out tiny vesicles containing molecules of microRNA. These molecules “prep” the skin’s dermis (inner layer) to receive and transport the cancer cells.

The researchers found chemical substances that can stop the process and are therefore potential drug candidates. Levy tells ISRAEL21c this research is still ongoing.

Another promising outcome of this groundbreaking study: The changes in the dermis caused by the microRNA, as well as the presence of the vesicles, could help doctors diagnose melanoma in its earliest stages.

Levy said this study was “an important step on the road to a full remedy for the deadliest skin cancer. We hope that our findings will help turn melanoma into a nonthreatening, easily curable disease.”

Tel Aviv University scientists led by Satchi-Fainaro are developing a nano-vaccine against melanoma.

They injected mouse models with nanoparticles of two peptides expressed in melanoma cells. This treatment stimulated the immune system and primed it to identify and attack cells containing these two peptides — just like vaccines do for viral diseases.

The nano-vaccine so far proved effective in preventing melanoma in healthy mice; in treating primary melanoma tumors in mice; and in treating metastatic brain tissue from melanoma patients.

Satchi-Fainaro’s model could also be a foundation for additional cancer nano-vaccines. 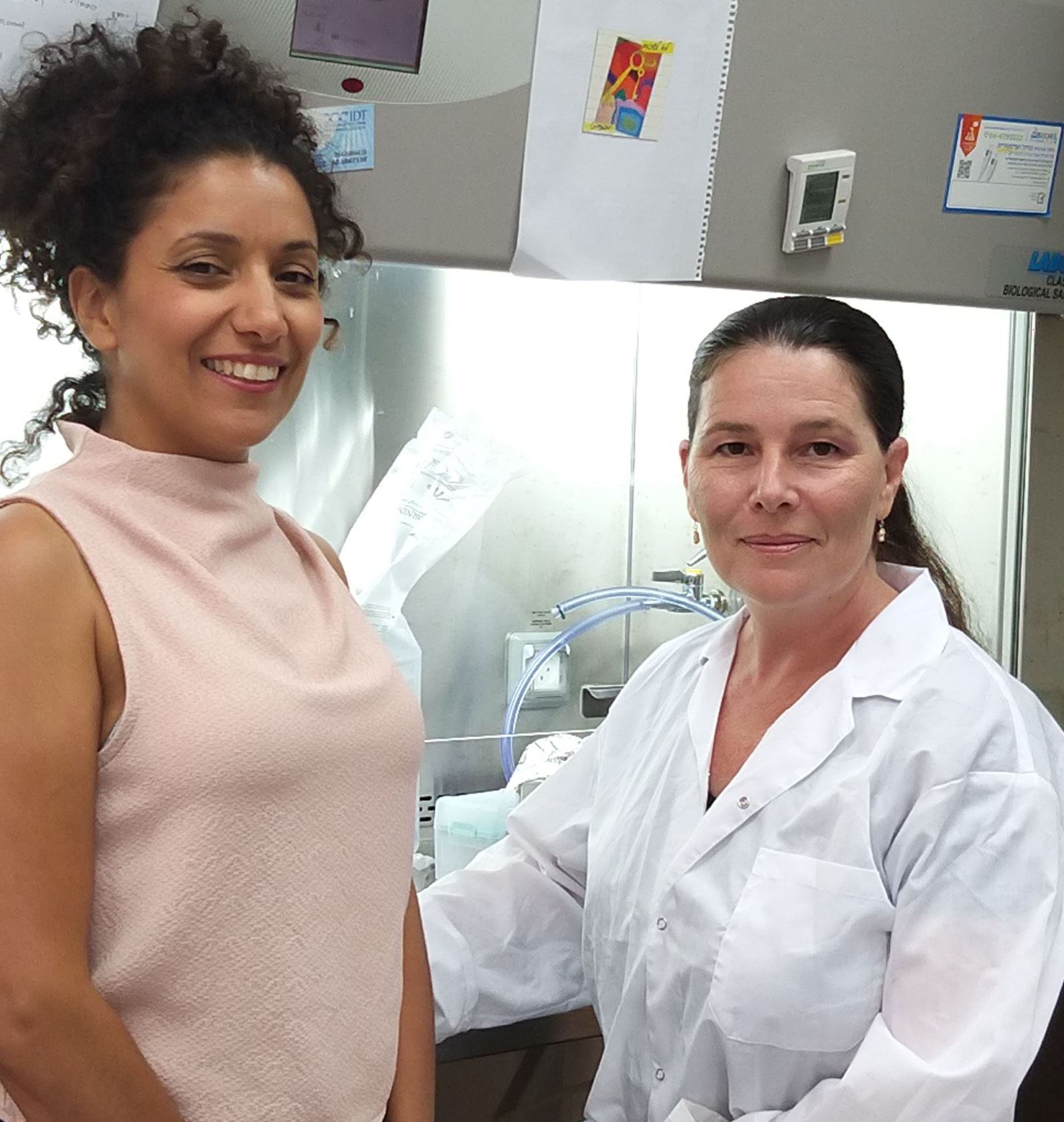 Levy and colleague Tamar Golan discovered that fat cells transfer a protein that enables melanoma cells to turn deadly and spread aggressively beyond the skin.

They successfully blocked that process in mouse models. Now, existing drug therapies for other types of cancer are being tested to block the protein transfer from fat cells to melanoma cells.

Molecular biologist Gabi Gerlitz of Ariel University studies what happens to the nucleus of melanoma cells during migration, a key step in metastasis. The nucleus of every cell holds its genetic material, the chromosomes.

Picture of a mouse melanoma cell migrating inside a collagen matrix. The matrix forces the cell to shrink and elongate. The nucleus is marked in yellow and the cell’s cytoskeleton in red. Photo courtesy of Dr. Gabi Gerlitz

When melanoma cells migrate, they squeeze themselves to pass through blood vessels or tissues. Squeezing condenses the chromosomes inside the nucleus, causing both physical and genetic changes that enable migration.

Gerlitz’s lab showed in mouse studies that interfering with condensation in the nucleus successfully interferes with migration. Ongoing studies look for factors at the nuclear envelope that affect chromosome condensation and cell migration. 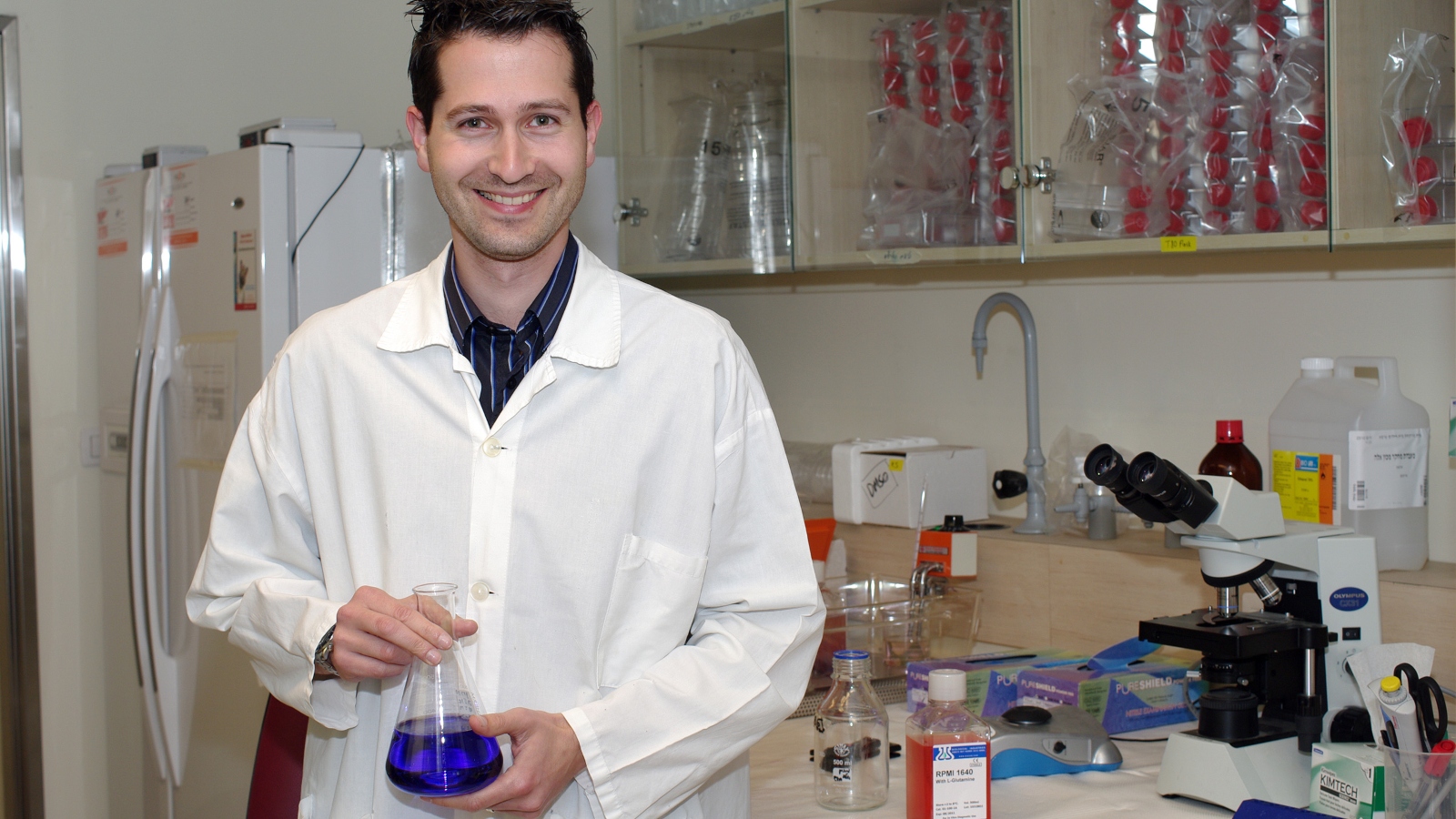 Immunotherapy – boosting the immune system to fight cancer – is successful in only 40% of melanoma patients.

One reason could be the rate of a melanoma patient’s fatty acid metabolism, according to a study on engineered mice by researchers from Tel Aviv University, Sheba Medical Center, the Salk Institute and Yale School of Medicine.

When fatty acids metabolize slowly, cancer cells have a chance to “hide” from the immune system’s T-cells that are supposed to destroy them.

Another possible reason immunotherapy fails in 60% of melanoma patients is when the tumor cells differentiate into more diverse subtypes, which are harder for the immune system to kill.

That finding comes from a mouse study done by scientists from the Weizmann Institute of Science, Hebrew University-Hadassah Medical School and Technion-Israel Institute of Technology with colleagues from the United States and England.

The Israeli researchers from that group, with other international scientists, also discovered a potential way to boost the success rate for melanoma immunotherapy by training the immune system to better recognize and target melanoma cells.

They searched for “signposts” of melanoma in mice and selected those to target in each case. The method proved effective against 90% of the cells.

Each of these discoveries could be valuable in developing personalized protocols for melanoma immunotherapy.