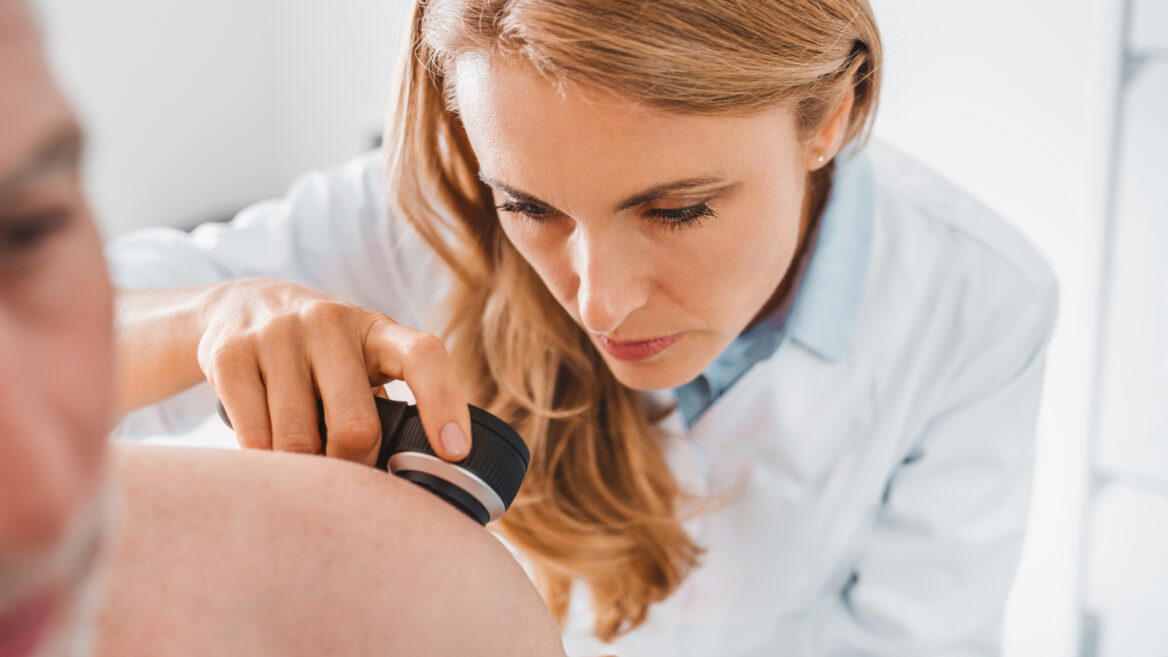 Photo by Inside Creative House via Shutterstock.com

When Ofir Aharon was finishing his PhD in electro-optics engineering, his mother was diagnosed with melanoma, a serious form of skin cancer.

He decided to channel his knowledge into inventing a potentially lifesaving device that could detect unique patterns of light movements in the skin before visible signs such as changes in pigmentation show up on the surface.

“Physicians say 50 percent of skin cancer starts out ‘innocent’ and then becomes cancer, but pathologists familiar with tissue structure say 95% of lesions that look innocent already started as cancer. I wondered why there was no tool that could show the early deterioration of lesions well before they became pigmented,” Aharon tells ISRAEL21c.

Aharon’s revolutionary discovery is that the movement of light scattering back to the imaging camera from a cancerous lesion looks much different than from a benign lesion.

“In skin cancer we see a lot of lateral movement, mainly circular. If the lesion is normal, or if there is no lesion on the skin, this lateral movement looks random, with no prominent movements and thus no directional patterns. But in skin cancer the movement of the backscattered light goes from the middle outward or circles the middle of the lesion.”

Aharon established Patternox to develop and commercialize his PatScope scanner, powered by an algorithm that extracts rotational movements from the scan.

The product’s technical description is “a multifunctional device for imaging surface/volume irregularities on a skin lesion by shadow gradient pattern imaging.” 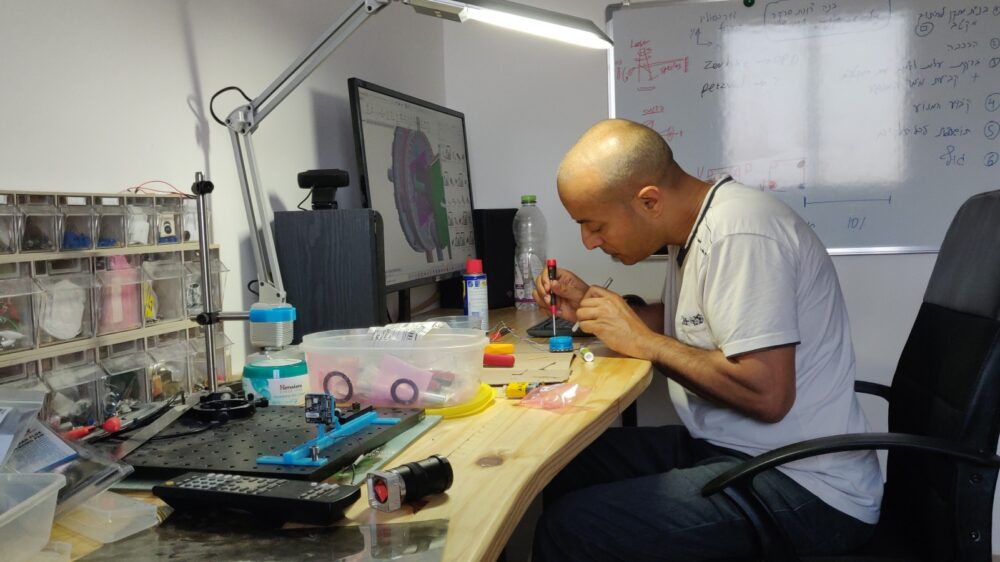 Dr. Ofir Aharon at work on the PatScope. Photo courtesy of Patternox

Having filed a US patent application in early 2020, Patternox will launch a seed round in July with hopes of having PatScope FDA approved and commercialized in about two years.

Aharon envisions a unique artificial intelligence (AI) system and reimbursement strategy so patients will be able to perform the scan at home with virtual assistance from their dermatologist.

‘Something we’ve never looked at before’ 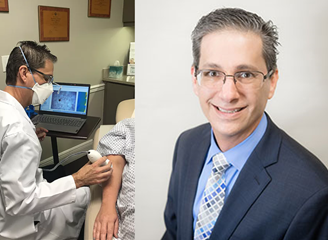 “About a year ago, I read an article about Ofir’s technology to test for melanoma in advance, and I contacted him because I was excited about this,” Galitzer tells ISRAEL21c. “It’s a new concept enabling us to see something we’ve never looked at before.”

Since December 2020, Galitzer has built a database of almost 200 scanned images. Each lesion is then biopsied and studied under a microscope to compare histological findings with the PatScope scans.

The more he uses the scanner the more easily he can discern what he is seeing, Galitzer says. Once there’s a large enough sample database to learn from, AI could interpret the scanned images.

“That is the exciting part,” he says. “AI would be incredible in giving us the answers we need.”

“We could evaluate the spot and immediately see if it has signs of abnormality and then take a biopsy to confirm that suspicion.”

Another study will begin soon under the direction of plastic surgeons Yoram Wolf and Ofer Arnon at Hillel Yaffe Medical Center in Hadera. Arnon is medical director of Patternox. 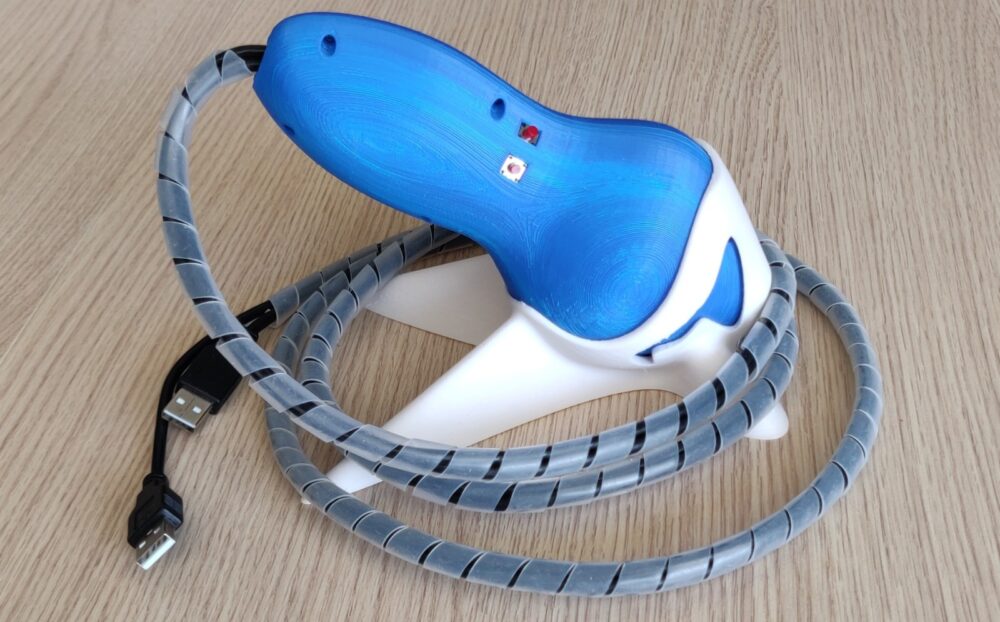 A prototype of the PatScope skin scanner. Photo courtesy of Patternox

In addition to detecting skin cancer, the PatScope also could be used to reveal changes in the deeper layers of skin over time, monitoring degradation from, for example, sun damage and aging.

The first place this application may be trialed is in outer space.

“It is known that astronauts experience accelerated aging in space. One of the main reasons is the change in blood flow, which first affects the papillary layer under the epidermis,” says Aharon.

“The method developed by Patternox would help astronauts monitor the behavior of their biggest organ — the skin — as an indicator of their exposure to microgravity, radiation dose, and stress during their missions in the International Space Station,” he explains.

Aharon is seeking private or public investment to pursue a proposed collaboration with ICECUBES space application services to send a PatScope to the International Space Station for experimentation.

The PatScope also has potential for cosmetic purposes. “For instance, dermatologists and aestheticians could use the scanner to monitor the effects of a prescribed skin cream,” Aharon says.

But due to his mom’s history with melanoma, Aharon’s main focus is on detecting skin cancer earlier than ever before possible.

“The PatScope shows not just underlying irregularities in patterns of lesions but also why the patterns are considered as a distortion utilizing PatScope’s algorithm analyzing the backscattered light’s lateral movements,” he says.

“If we can identify unique characteristics of lateral movements for healthy skin versus skin cancer, we can probably develop artificial intelligence to diagnose skin cancer based on these kinds of movement.”