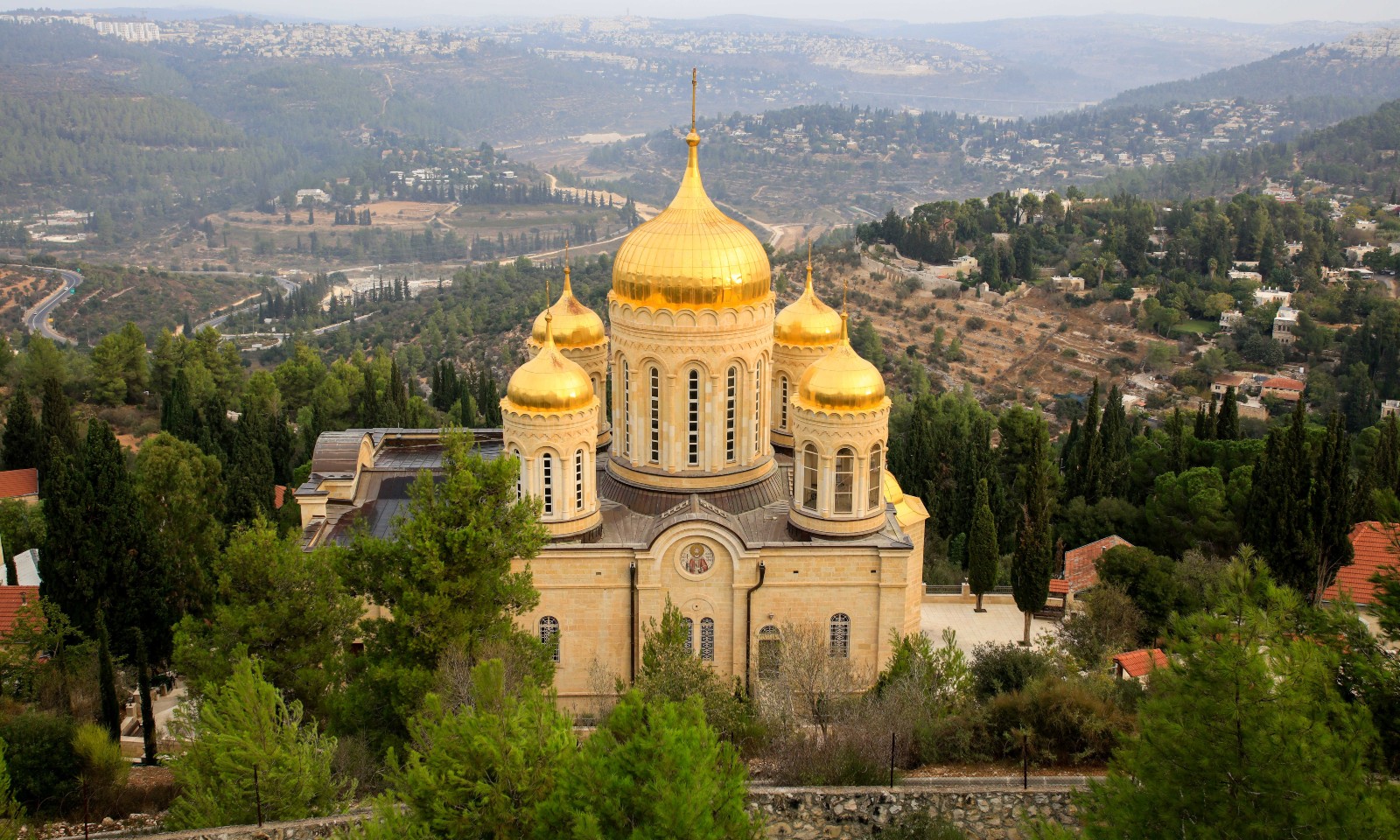 View of the Russian Orthodox church in the Ein Kerem neighborhood of Jerusalem. Photo by Sliman Khader/FLASH90
#Walk&Hike

To fully appreciate the remarkable beauty and history of Jerusalem, it’s better to get your walking shoes on. Writer Arnold Slyper takes us on his favorite walks.

There is no doubt that to fully appreciate Israel — its beauty, its history, its relationship with the Bible, and its geography — the best way to do it is by foot. And Jerusalem is especially rich in history.

From the moment I semi-retired to Israel seven and a half years ago from Pennsylvania, I began exploring Jerusalem and the areas around it. It began as a fun adventure, but quickly turned into something more as I began writing up my trips.

This became the basis of a recently published book, In and Around Jerusalem for Everyone: The Best Walks, Hikes and Outdoor Swimming,  which is now a popular and bestselling tour book about Jerusalem.

These are three of my favorite walks around Jerusalem, for you to share. There is no need to wait for an organized tour; just go out by car or bus and discover it for yourself.

All these walks are circular, so you won’t have to return the same way you came.

This circular walk in the Jewish Quarter is configured around its synagogues. Many of them are hundreds of years old, and from their stories it is possible to construct the history of Jewish settlement in the Old City of Jerusalem over the last 750 years.

The story begins in 1267CE, when the famous Spanish scholar, philosopher and biblical commentator Rabbi Moses ben Nachman (known as Nachmanides or the Ramban) came alone at age 72 to a city that had been devastated by the Tartars. Undaunted, he took the first steps in developing the Jewish Quarter.

The walk starts at the northern (private) parking lot for the Jewish Quarter at Tiferet Yerushalayim Square and its first stop is the interconnected Four Sephardi Synagogues built in the 1600s to 1700s. 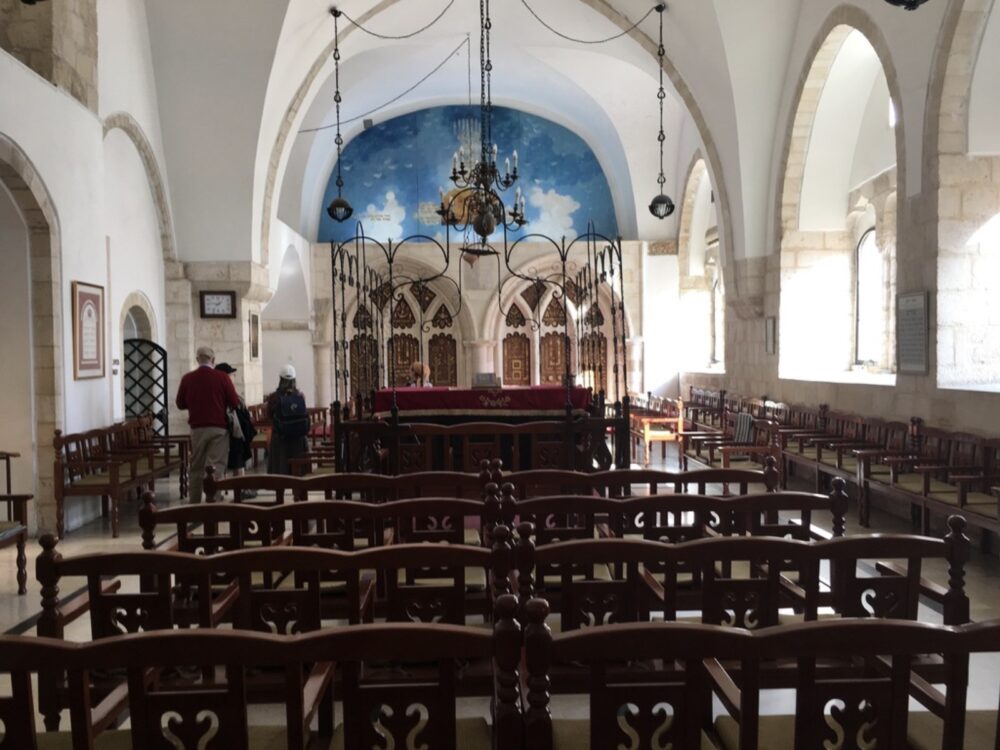 The Yohanan ben Zakai Synagogue in Jerusalem’s Old City was the first of the Four Sephardi Synagogues, built in the early 1600s after the Ramban Synagogue was closed by Turkish authorities. It still functions today. Photo by Arnold Slyper

After this we go to the Ramban Synagogue. Ramban’s original synagogue was in the ruins of an abandoned building on Mount Zion. The Ramban Synagogue in existence today was, for a time, the only synagogue in the Old City for Sephardi and Ashkenazi congregants. It was closed by the Turks in 1589 because of its proximity to a mosque (which is still there) and was not reopened until after the Six Day War. 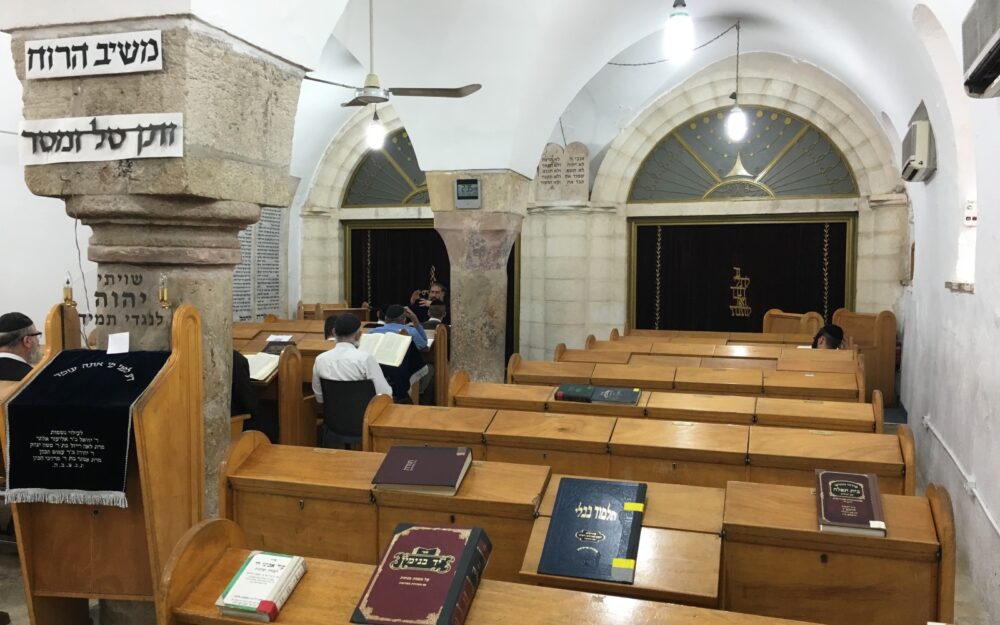 The interior of the Ramban Synagogue. This is not Ramban’s original synagogue, which was on Mount Zion, but dates to a later period when Jews moved inside the city walls. Photo by Arnold Slyper

We then pass the Hurva Synagogue, which can also be toured, on our way to the Menachem Zion synagogue. Many people miss this historic building because it is on a higher level than the street.

This was the site of the Ashkenazi community’s first synagogue. It was rebuilt by followers of the Vilna Gaon in the early 1800s. Eventually, it became too small for the growing community and the Hurva Synagogue was built in 1875 as their main synagogue. All these synagogues were either partially or completely destroyed by the Jordanians after the 1948 War of Independence and were reconstructed after the Six Day War when Jerusalem was reunited. 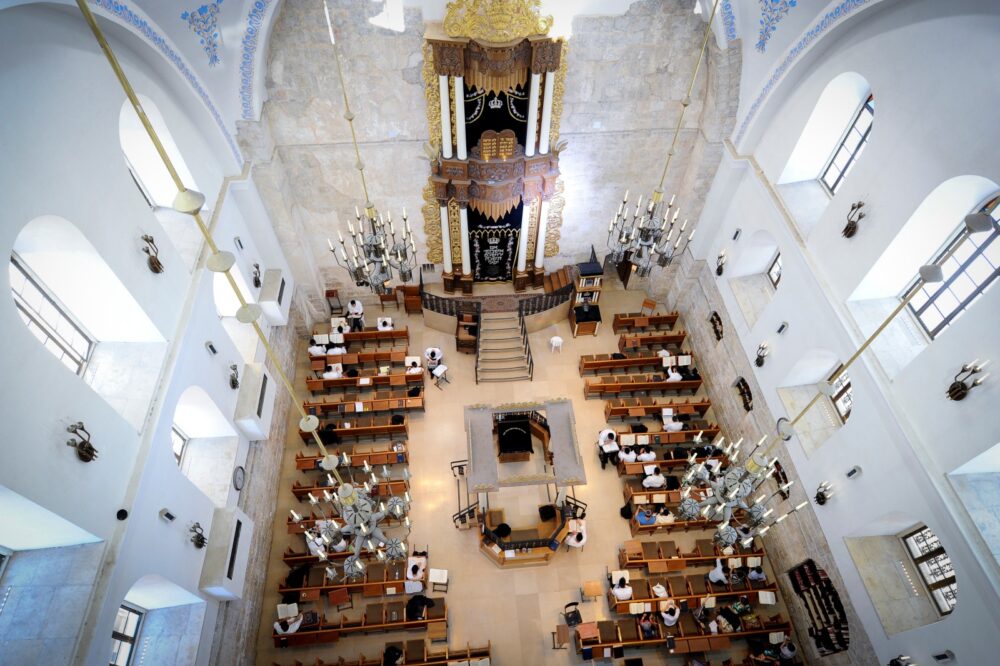 The Hurva Synagogue in Jerusalem’s Old City was completed in 1875, blown up by the Jordanians in 1948 and rebuilt in 2010. Photo by Mendy Hechtman/FLASH90

The walk passes the Karaite Synagogue, which can also be visited, and then proceeds to HaTamid Street for a wonderful view over the plaza of the Western Wall.

Finally, we visit the Batei Mahse Square. There are a number of things to see here. My favorite is a plaque containing the words of the prophet Zecharia: “Old men and old women will once again sit in the streets of Jerusalem, each with his staff in his hand because of advanced age, and the streets of the city will be filled with boys and girls playing in the street.” Come during after-school hours, and you will see the fulfillment of this prophecy.

The walk then returns to the starting point.

2. The beautiful village of Ein Kerem 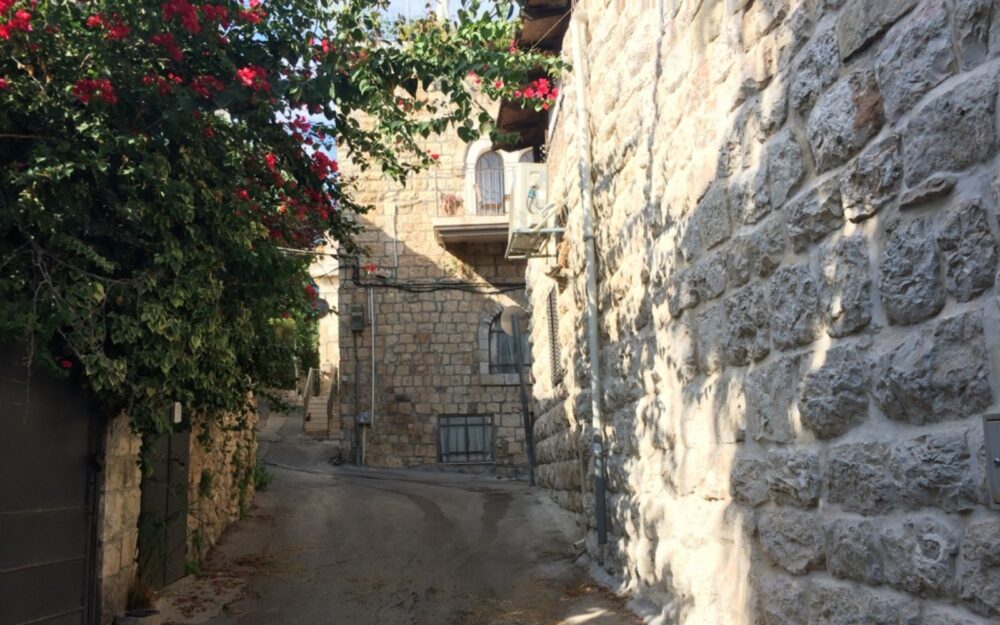 One of the many colorful and quaint streets of Ein Kerem. Photo by Arnold Slyper

This delightful, picturesque village nestled in the Judean mountains has its own distinctive charm even though within the Jerusalem municipality.

I recommend a 2½- to 3-hour walk that starts at Mount Herzl (the last stop on the light rail) and descends through the Ein Kerem Valley in the Jerusalem Forest.

Christians will find the churches in Ein Kerem related to John the Baptist of interest, since this is where he was born and raised. Another attraction are the artisans’ workshops that punctuate the beautiful streets of Ein Kerem (also spelled Ein Karem). 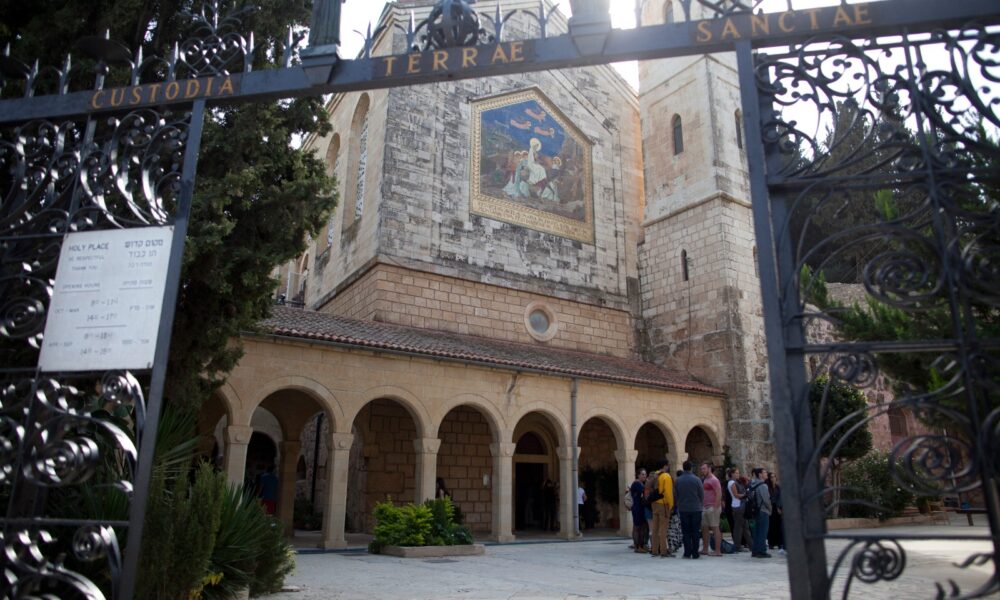 Church of the Visitation in Ein Kerem, Jerusalem. Photo by Lior Mizrahi/FLASH90

After leaving the forest, the hike reaches Derech Ein Kerem, which is the main road of the village and contains workshops and galleries. We then go to the Spring of Mary. From here we wind through narrow colorful streets, with more galleries and stunning views of the opposite side of the valley.

Rather than a long walk up the hill, we take a short bus ride back to Mount Herzl. 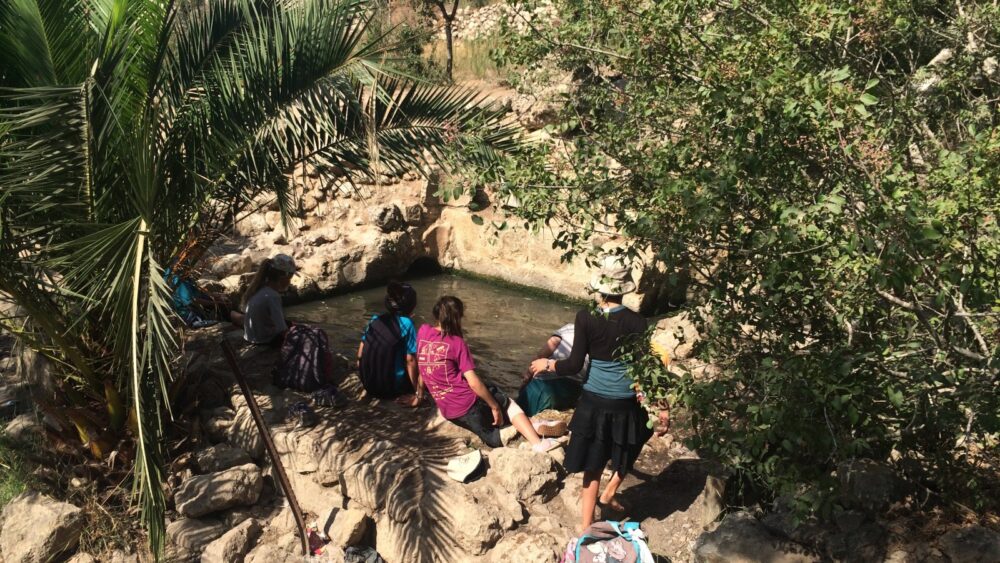 Ein Tamar is one of several pools along the Trail of the Springs. Photo by Arnold Slyper

This almost three-hour reasonably easy hike along a mountain ridge is one of the most popular hikes in the Judean Mountains. The starting point is a 15-minute walk from Hadassah Medical Center Ein Kerem, so it is readily accessible by Jerusalem public transport.

There are absolutely wonderful views over Nahal Sorek and the Judean Mountains. There are also a number of small pools along the way (hence its name) fed from underground springs and in which one can swim.

I made this hike circular, and in my opinion my circular version is even better than the one-way version most Israelis are familiar with. The hike starts at the parking lot for the Aminadav Forest. 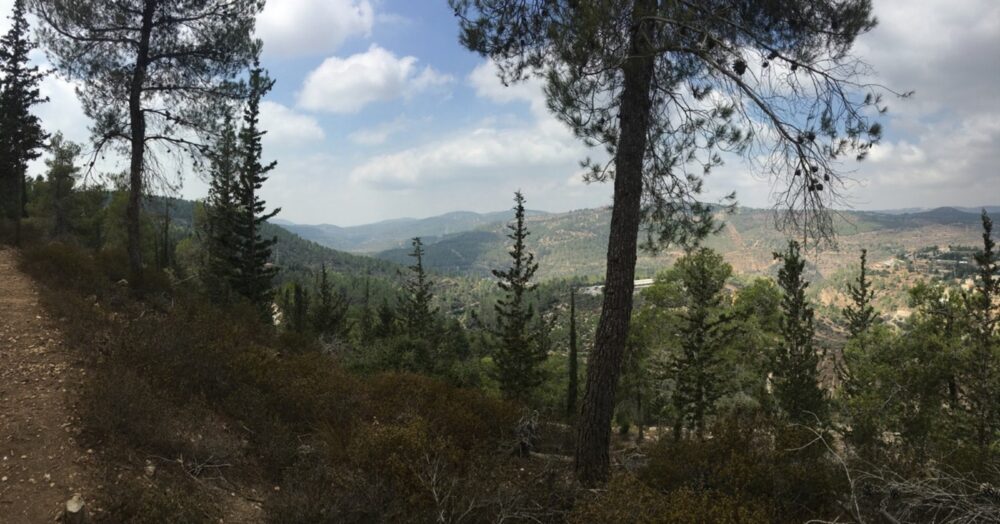 A panoramic view of the Judean Mountains from the Trail of the Springs. Photo by Arnold Slyper

Halfway through the hike, it is possible to walk to the Yad Kennedy Memorial, an impressive memorial to John F. Kennedy, either along the main road or on a slightly challenging footpath. The memorial is shaped like the stump of a tree to symbolize his life cut short. From the hill, look down into Emek Refaim for even more splendid views.

The hike returns along a jeep trail and descends back to Ein Tamar through a luscious valley. From Ein Tamar, retraces your steps back to the starting point.

Dr. Arnold Slyper is the author of the book In and Around Jerusalem for Everyone: The Best Walks, Hikes and Outdoor Swimming, published in 2020.