The donor’s mother had acquired the document on a visit to Jerusalem in 1965 and hung it on her wall.

The fragment, dated to the late seventh or early sixth century BCE, is one of the three oldest known papyrus fragments in the world. It now joins the other two in the Dead Sea Scrolls collection. 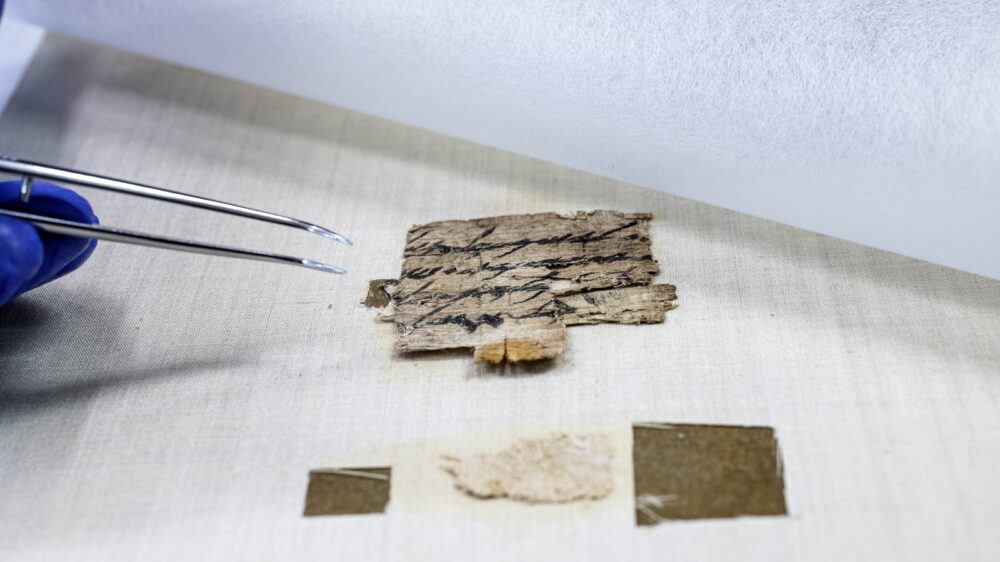 The papyrus under treatment in the IAA Scrolls Conservation Laboratory. Photo by Shai Halevi/IAA

These fragments can be traced to Judean Desert caves used to store and preserve papyri thanks to the area’s dry climate. Most of the other 25,000 fragments in the collection date from the end of the Second Temple period, around the year 70 CE.

Written in the ancient Hebrew script used in the times of the Judean kings, the truncated message on the fragment is addressed to or from “Ishmael” and reads “Don’t send to …” and “of no help.”

According to Prof. Shmuel Ahituv of Ben-Gurion University’s Department of Bible Studies, Archaeology and the Ancient Near East, the name Ishmael (meaning “God will hear”) was common. It even appears on a late Judean monarchy clay bulla – stamp for sealing documents – that reads “Belonging to Ishmael, the king’s son.”

Ahituv discovered a photograph of the as-yet-unknown fragment in 2018, while preparing the posthumous publication of his colleague Ada Yardeni. He then joined forces with the Antiquities Theft Prevention Unit of the IAA, the Jerusalem and Heritage Ministry, and the Culture and Sport Ministry, to locate and repatriate the original.

The Montana woman received it as a gift from Joseph Sa‘ad, then-curator of Jerusalem’s Rockefeller Museum, and Halil Iskander Kandu, an antiquities dealer from Bethlehem who sold thousands of Dead Sea scroll fragments. The IAA is seeking additional finds in the caves of the Judean Desert. Photo by Eitan Klein/IAA

Her son visited the conservation lab in Jerusalem to see how rare documents are preserved and studied in climate-controlled conditions, and agreed to donate the fragile document.

On September 15, Ahituv will present the story at the IAA’s First Judean Desert Conference at the Bible Lands Museum in Jerusalem.