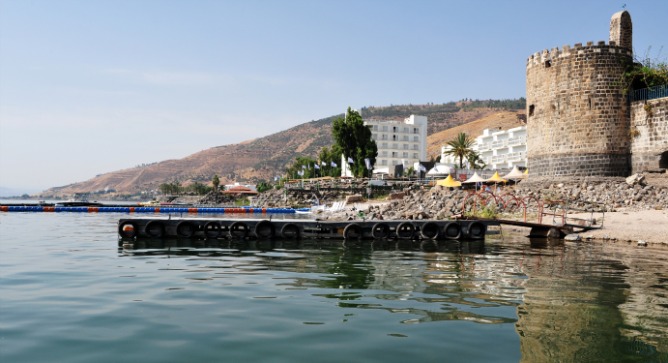 The Old City walls of Tiberias. Image via Shutterstock.

Flowing with natural hot springs, brimming with Christian and Jewish holy sites and hugging the shores of the Sea of Galilee, Tiberias is a top tourist stopover for visitors to Israel. The city boasts many historical and religious sites as well as water recreation options.

But required tourist hotspots usually translate to opening one’s wallet at every other turn. ISRAEL21c presents 12 things to do in Tiberias without spending an agora.

On Tuesdays, a local tour guide takes tourists through the archaeological park (next to Sheraton Moriah and Golden Tulip hotels) and then to the promenade, past the Turkish citadel, to the famous Etz Hachaim synagogue of Rabbi Haim Abulafia, and the Scottish Compound (see below). On Fridays, he leads a free tour of the city’s historical sites. Every Sunday, Monday and Thursday, a walking group leaves from the Tiberias Tourist Information Center (04-672-5666), and the Tiberias Hotel Association (04-672-4549) offers free Saturday morning walking tours revealing the history behind the walled Ottoman city to today’s contemporary hotel industry. Book in advance and reconfirm. 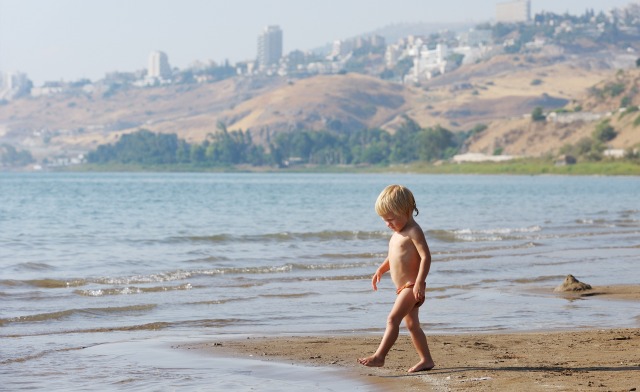 Located on Israel’s only fresh water lake, Tiberias has many good beaches to choose from. Image via Shutterstock.

Tiberias is located on the shores of Israel’s only freshwater lake, the Sea of Galilee (Lake Kinneret). There are 10 beaches to choose from, including three oriented to religious sunbathers that separate the sexes and enforce modesty codes. HaTchelet Beach (“The Light-Blue Beach”) is one of the most pristine; Holiday Inn Beach is a good place for water sports and kids playgrounds; and Beriniki Beach offers facilities for camping.

Located in the center of town on one of the last ancient cobblestone streets (HaKishon, between HaGalil and HaBanim streets), the Amdur Fine Gallery is the place to go for modern art. Here you’ll find original works of known and emerging Israeli contemporary artists. The gallery hosts events such as wine-and-cheese evenings and concerts. On exhibit are paintings, sculpture, jewelry and furniture design.

Think Bellagio on the Kinneret. Disk In Pro, Israel’s world-renowned multimedia design company known for its installations in visitor centers, museums, exhibitions and theme parks, created a breathtaking water-music-light show for Tiberias. The show takes place at the south end of the Yigal Alon Promenade, and is free to the public three times each evening from 7-9 pm. (Note: Tiberium depends on the water level of the Kinneret. If the level is too high, the light show will not take place.)

No Christian pilgrimage to Israel is complete without a visit to the Galilee. While most of the important churches are in communities surrounding the lake, many churches were also built in Tiberias. Check out St. Peter’s Church, constructed on the ruins of a Crusader church; the modest basalt Church of Scotland; and the Greek Orthodox Church and Monastery of the Twelve Apostles, which includes three houses of prayer and a wall of religious icons.

Cemeteries aren’t usually at the top of a tourist’s itinerary, but the Old Cemetery in Tiberias is an exception. The ancient sacred burial ground, which is still in use, is said to be the site where the Sanhedrin (Supreme Court of Jewish law) will reemerge first before relocating to the Temple in Jerusalem. The cemetery dates back to Herod Antipas, son of Herod the Great, who built the city in 17 BCE. 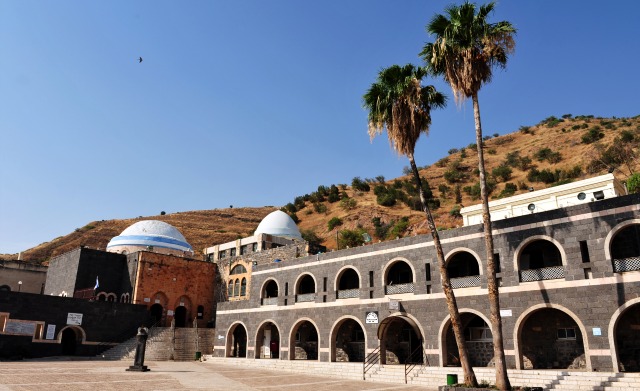 One of the four “Holy Cities” of Israel, Tiberias is the final resting place of many great Jewish sages. Throughout the year there’s a steady stream of people coming to pray at the tombs of Rabbi Meir Ba’al HaNes, a second-century sage who helped compile the Mishna; Rabbi Moshe Ben Maimon (also known as Maimonides or Rambam), a 12th century court physician, author and rabbi; Rabbi Yohanan Ben Zakkai, active in the era of the Second Temple; Rabbi Akiva, a great Jewish scholar killed by the Romans for his role in the Bar Kochba Revolt; and Rabbi Moshe Chaim Luzzatto (Ramchal), a prominent Italian-Jewish rabbi, kabbalist and philosopher.

There are 30 hotels peppered around Tiberias. The Scots Hotel, located in the Scottish Compound, has the most fascinating history. Even if you’re not staying here, come have a look around. The hotel was established by the Scottish Church in 2004 in the former Scottish Hospital, the first hospital in Tiberias, built in 1894. The hotel combines 19th century basalt buildings with a modern hotel of international standards. The Church of Scotland is also located in the compound.

Take a pleasant walk along the Yigal Alon Promenade (better known as the Tiberias Promenade) and enjoy the views of the water, boats and the marina. This is a popular place for beautiful sunset scenes. In high season, arts and crafts stalls pop up along the way.

In winter, one of the most beloved topics of conversation is the water level of the Sea of Galilee. If you’re in Tiberias, head over to the southern part of the promenade to the five-meter-high, three-and-a-half-meter-wide Water Level Measure sculpture. It shows passersby a 3D representation of the lake’s water level.

11. The Fish Market (and falafel stalls)

The city’s fish market is famous. Get an early start and watch the dozens of fishing boats head onto the lake just after dawn and then bring back their fresh catch to the shuk (marketplace). Close to the fish market is a popular falafel area where vendors offering free tastes in the hope of enticing customers.