Liel Krutokop, 11, with the 2,000-year-old coin she found. Photo by Yaniv Berman/City of David and Israel Antiquities Authority

Eleven-year-old Liel Krutokop from Petah Tikva, digging in ancient dirt at the Emek Tzurim Sifting Project in Jerusalem, unearthed a pure silver shekel coin dating from the Second Temple period some 2,000 years ago.

Scholars believe the 14-gram coin was part of the vast silver reserves of the Second Temple. It seems to have been minted by a priest who joined the Great Revolt of the Jews against the Romans, shortly before the destruction of the Second Temple in 70 CE.

On one side is an inscription of a cup captioned “Israeli shekel” in ancient Hebrew script alongside an abbreviation for “second year” – meaning the second year of the Great Revolt (67-68 CE). 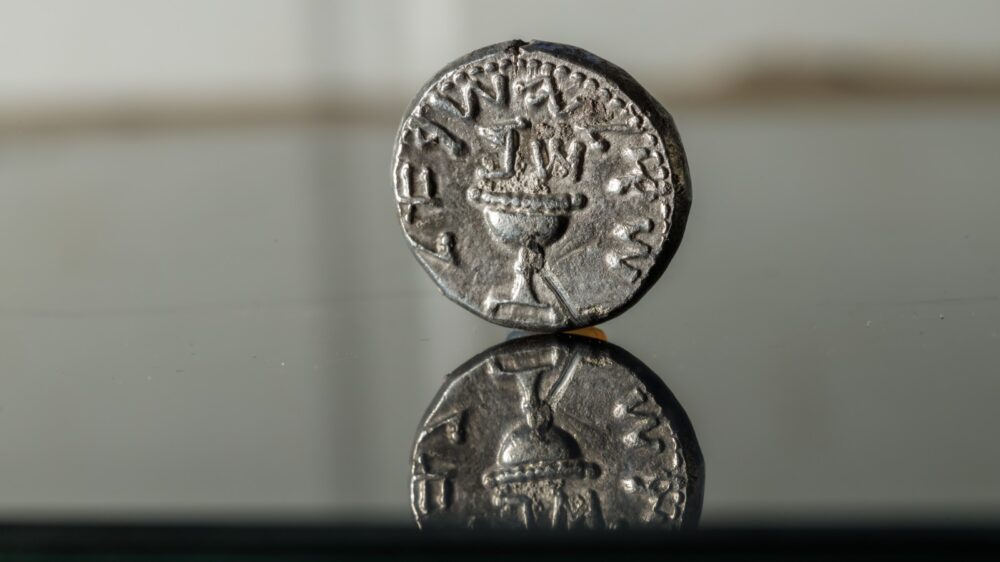 The silver coin with a cup with the caption: “Israel Shekel” and the letters: Shin and Bet (second year of the Great Revolt). Photo by Eliyahu Yanai/City of David

On the other side is an inscription from the headquarters of the High Priest and the words “Holy Jerusalem.” The silver coin with the headquarters of the High Priest and the inscription “Holy Jerusalem.” Photo by Yaniv Berman/City of David and the Israel Antiquities Authority

“This is a rare find, since out of many thousands of coins discovered to date in archeological excavations, only about 30 coins are coins made of silver, from the period of the Great Revolt,” said Robert Kool, head of the Coin Department of the Israel Antiquities Authority. The coin was discovered in dirt from archeological excavations conducted by the Israel Antiquities Authority on the Pilgrimage Road in the City of David National Park.

According to IAA archeologist Ari Levy, “This street, which connected the Siloam Pool in the south of the City of David to the Temple Mount in the north, was Jerusalem’s main street during the Second Temple period, where thousands of pilgrims marched on their way to the Temple. There is no doubt that there would have been extensive trading here. This is evidenced by the many weights and bronze coins we have found here. But to find a rebel coin made of pure silver is definitely very special and exciting.” The Krutokop family with the rare coin on the Pilgrimage Road in the City of David. Photo by Yaniv Berman/City of David and the Israel Antiquities Authority

Liel related that as she and her sister were pouring a bucketful of dirt into a strainer, she spotted something round among the stones.

“At first, I did not know what it was, but it looked different from all the other stones. My father brought it to one of the assistants, and she showed it to an archeologist. He looked at it and said it was a silver coin that needed to be cleaned. I was very excited.”

The silver coin will be presented to the public during Hanukkah at Emek Tzurim National Park. As for Liel, the IIA will send an educator to her class to talk about her find and show the kids how coins were minted in antiquity.

UNCOVER ISRAEL - Get the ISRAEL21c
Weekly Edition free by email
Sign Up Now!
Bring Israel's story to life.
Millions of people around the world rely on us to gain a deeper understanding of Israel. We are the trusted source for original content you won't find anywhere else.
You can make a difference. Donate today to support journalism that brings Israel’s story alive.
SUPPORT ISRAEL21c
Read more on:   News, Archeology, Jerusalem, city of david, coins