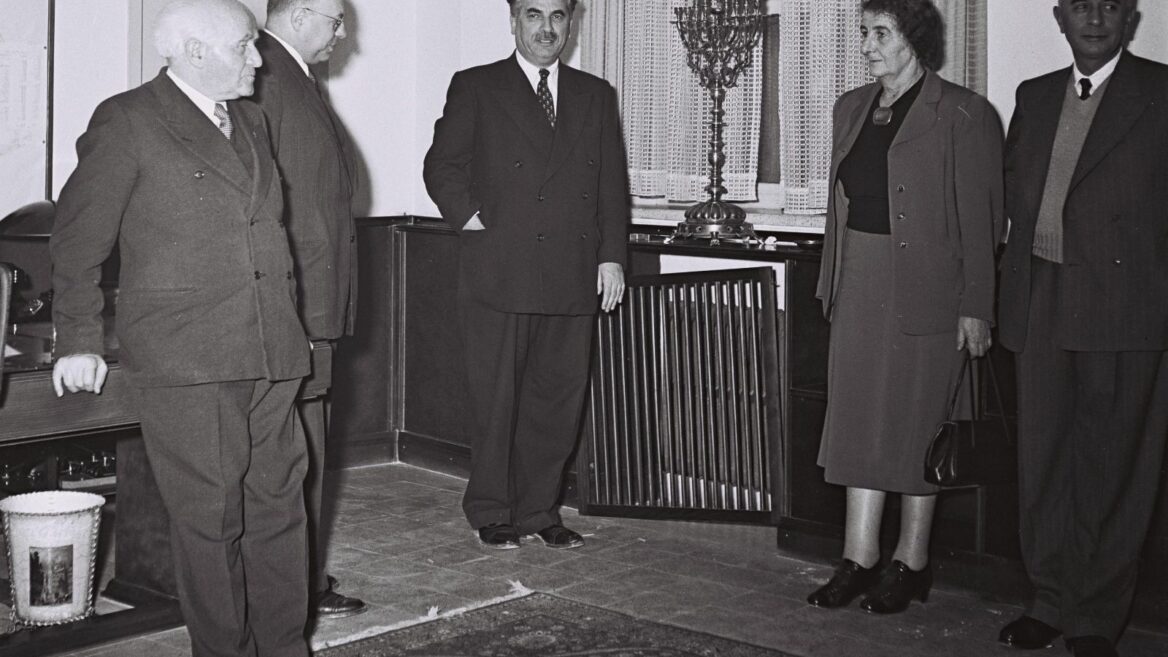 Government leaders including Golda Meir and David Ben Gurion gather for a candle-lighting ceremony after a cabinet meeting in 1953. Photo by David Eldan/Government Press Office

Hanukkah is perhaps the most photogenic holiday on the Jewish calendar, all sparkly lights, singing people and donuts oozing jam.

Not to mention that there’s no weird things such as fish heads in sight. 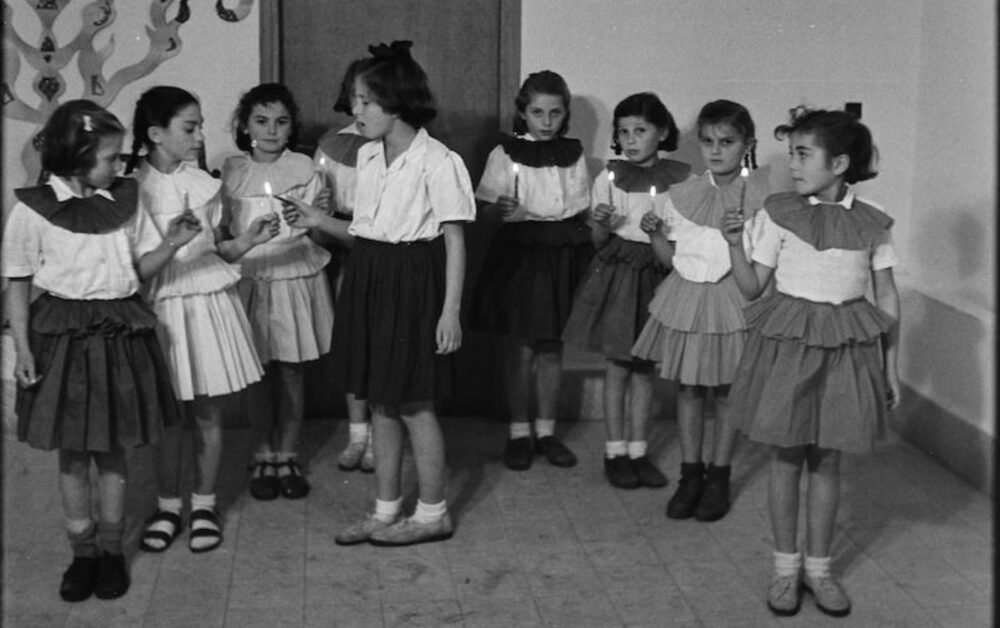 Young girls pose in the shape of a hanukkiah during Hanukkah celebrations in 1948. Photo by Rudi Weissenstein, all rights reserved to Pri-Or PhotoHouse, The Pritzker Family National Photography Collection, The National Library of Israel

To celebrate all that is good and beautiful about this holiday of lights, we’ve gathered photos of the Hanukkahs of yore in Israel and its surroundings. 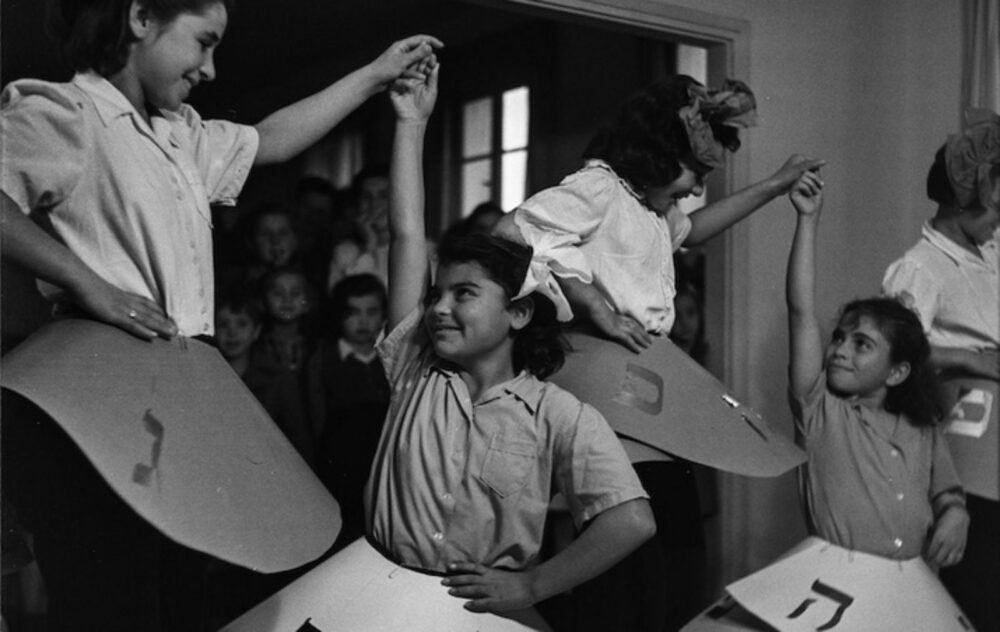 Children perform a dreidel-inspired dance in Raanana in 1948. Photo by Rudi Weissenstein, the Photohouse Collection, The National Library of Israel 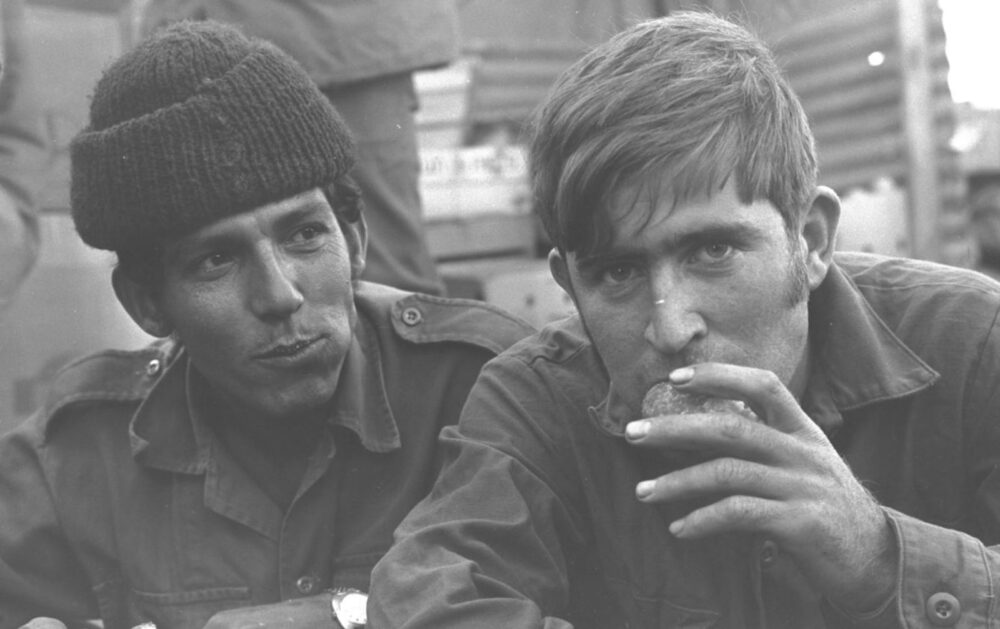 Soldiers devour donuts at their post on the west bank of the Suez Canal following the Yom Kippur War, 1973. Photo courtesy of GPO

Some are courtesy of the Keren-Kayemeth-LeIsrael-Jewish National Fund (KKL-JNF), which is celebrating a centennial of wonderful archives. 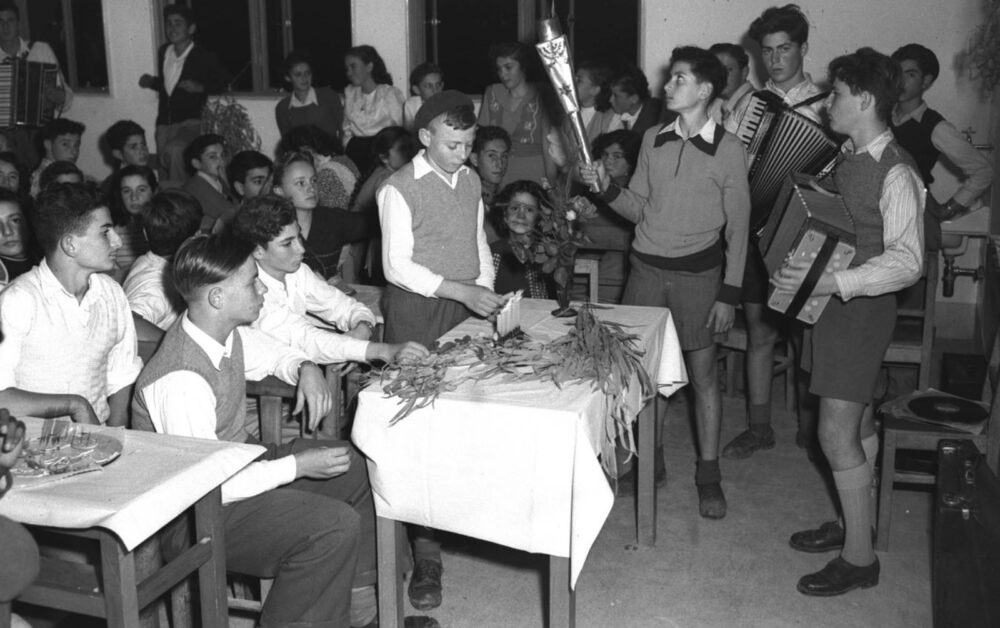 Schoolchildren gather in the classroom for a musical Hanukkah party in 1949. Photo by Fritz Cohen/Government Press Office 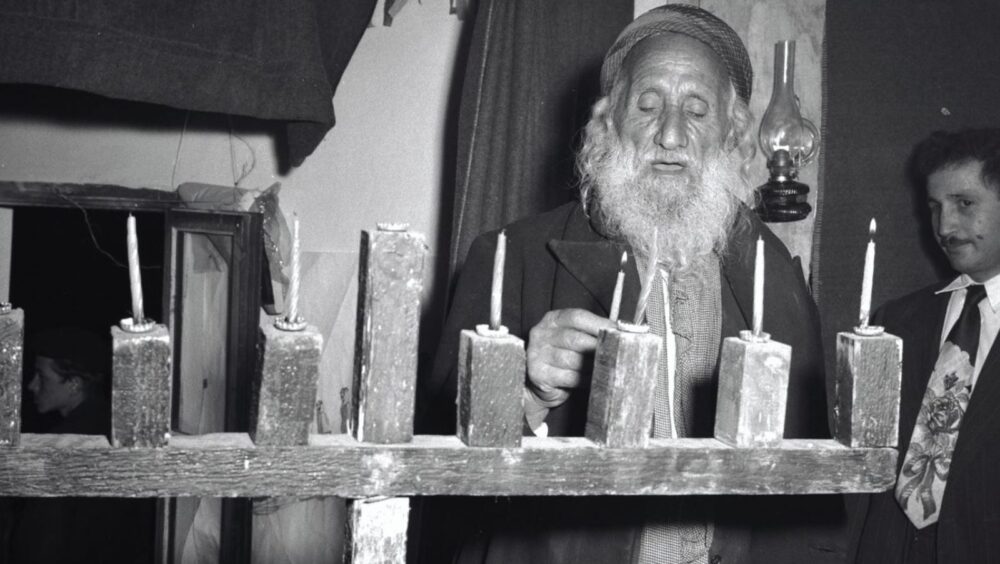 A member of Israel’s Yemenite community lights a homemade hanukkiah in a moshav in the Jerusalem Hills, 1954. Photo by Fritz Schlesinger/KKL-JNF Photo Archive

Others come from the National Library of Israel and from the hardworking photographers of the Government Press Office (GPO). 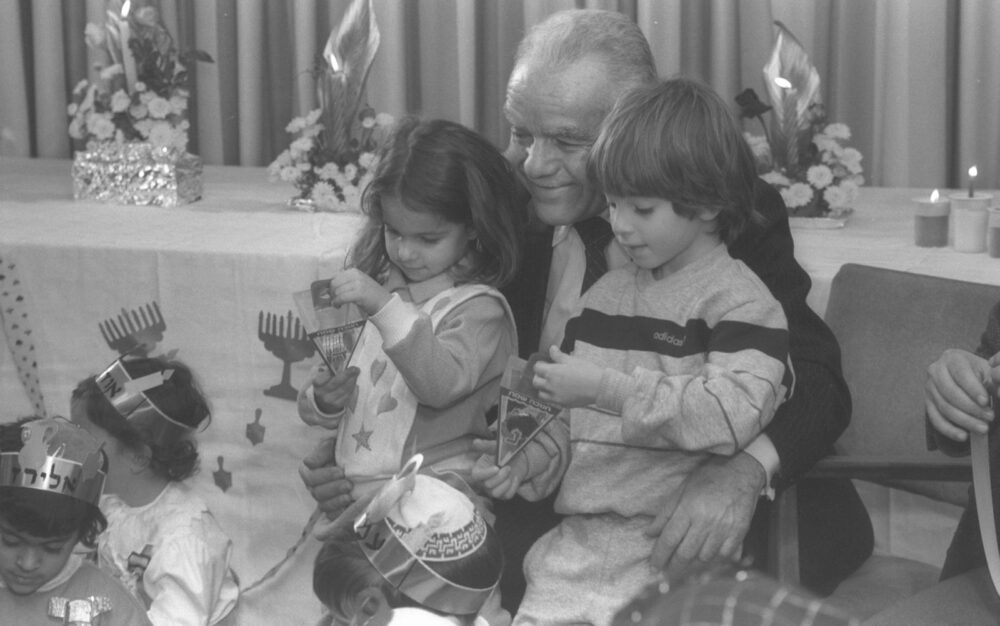 Prime Minister Yitzhak Shamir with two of his grandchildren during a Hanukkah celebration in his office in Jerusalem in 1986. Photo by Chanania Herman/GPO 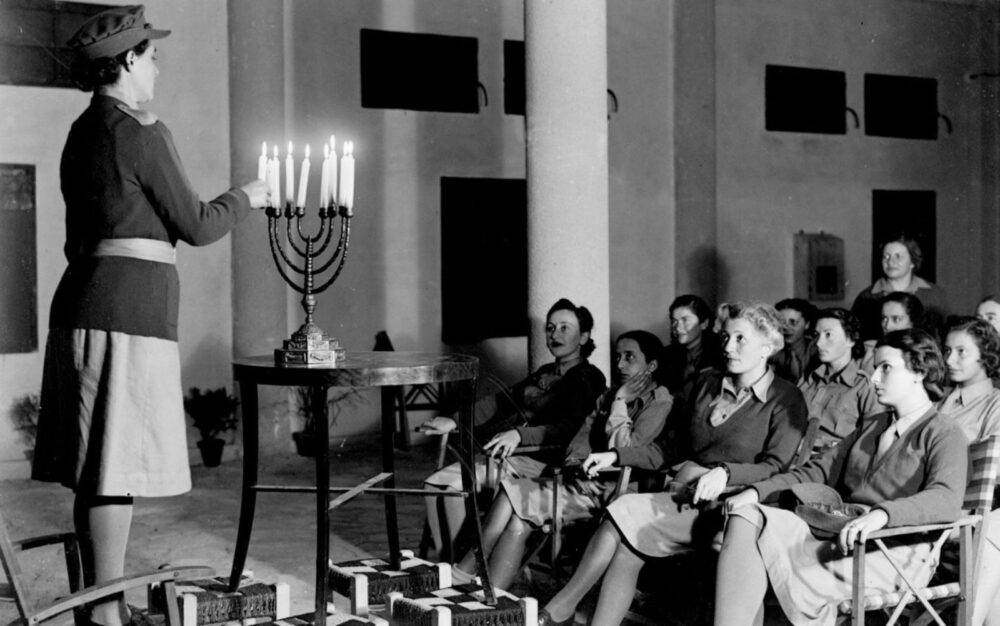 All give us a glimpse at the different zeitgeists throughout the ages, while at the very same time revealing how little has changed throughout the generations – for little children doing dreidel-inspired dances has apparently always been the fashion. 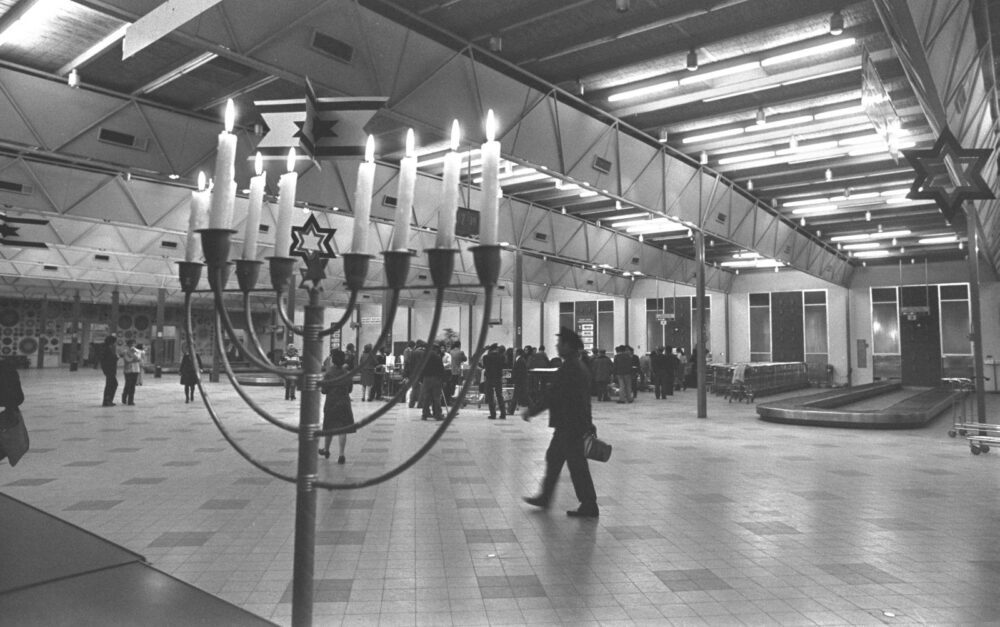 A hanukkiah is lit at the arrival hall at Ben-Gurion Airport in 1974. Photo by Moshe Milner/GPO 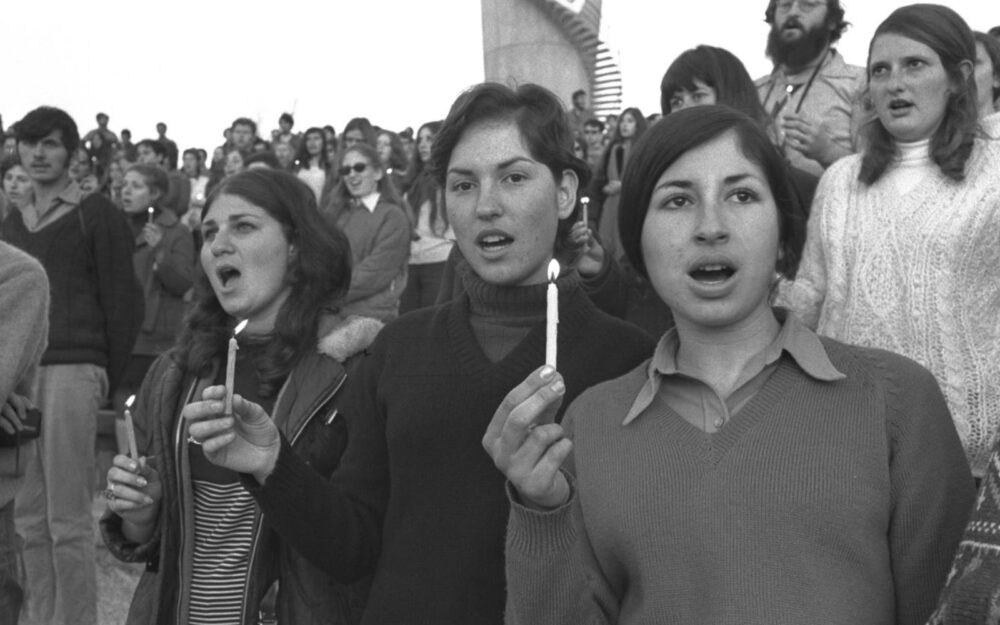 New immigrant students light candles and sing during a Hanukkah celebration in the central town of Modi’in. Photo by Cohen Fritz/Government Press Office

Happy holidays from all of us here at ISRAEL21c! 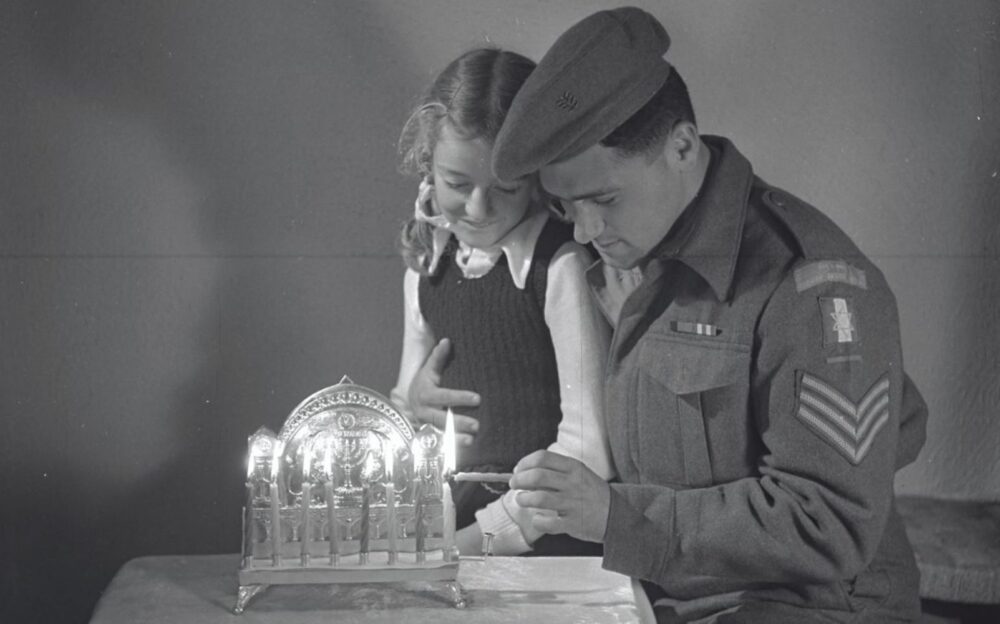 A Jewish Brigade soldier lights a hanukkiah with a young girl in Mandate-era Jerusalem, 1945. Photo by M. Schwartz/KKL-JNF Photo Archive
UNCOVER ISRAEL - Get the ISRAEL21c
Weekly Edition free by email
Sign Up Now!
Bring Israel's story to life.
Millions of people around the world rely on us to gain a deeper understanding of Israel. We are the trusted source for original content you won't find anywhere else.
You can make a difference. Donate today to support journalism that brings Israel’s story alive.
SUPPORT ISRAEL21c
Read more on:   Spotlight on Israel, Culture, Hanukkah