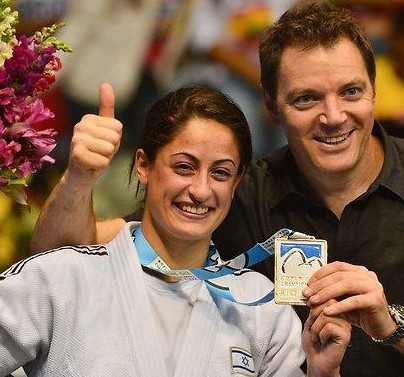 Israeli sport fans are all smiles as one of the country’s most promising athletes took the gold medal at the Judo World Championships. Yarden Gerbi, the world number one in the U63 kilogram category, defeated France’s European champion Clarisse Agbegnenou in just 43 seconds in Rio De Janeiro for the win.

“I’m so happy that it really ended this way,” said the Netanya resident. “I had a great competition. Nothing can be better than this.”

Gerbi won all five of her fights by ippon, the highest score a fighter can achieve and the judo equivalent of a knockout. Her final ippon was so strong that it left Agbegnenou with a dislocated her shoulder.

Prime Minister Benjamin Netanyahu called Gerbi to congratulate her and released a congratulatory statement describing her medal as a “fantastic achievement” and praising her “swift, elegant” victory in the finals bout.

Olympic Committee of Israel president Igal Carmi called Gerbi’s win “historical” and said he hopes she’ll “continue to reap the results of her hard work and fulfill her dream of representing Israel at the Olympics in Rio De Janeiro.”

Gerbi – who does not have a sponsor – will receive a $27,700 grant from the Olympic Committee of Israel and the Sports Betting Council.

Judo holds a special place in Israel’s sports pantheon – with the country’s judokas repeatedly winning top international competitions. Gerbi is the fifth Israeli to win a medal in the world championships, after Yael Arad, Oren Smadja, Arik Zeevi and Alice Schlesinger. But she is the first to win gold.

UNCOVER ISRAEL - Get the ISRAEL21c
Weekly Edition free by email
Sign Up Now!
Bring Israel's story to life.
Millions of people around the world rely on us to gain a deeper understanding of Israel. We are the trusted source for original content you won't find anywhere else.
You can make a difference. Donate today to support journalism that brings Israel’s story alive.
SUPPORT ISRAEL21c
Read more on:   News, Judo, Yarden Gerbil, judoka, medal