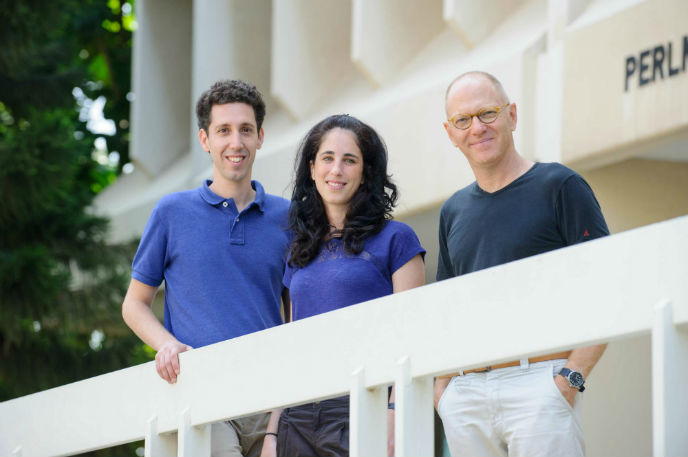 Years of intense lab work in Israel have led to the world’s first artificial cell-on-a-chip, an exciting development with many potential applications.

“The idea to mimic a living cell is a longstanding dream shared by many,” Weizmann Institute of Science Prof. Roy Bar-Ziv tells ISRAEL21c. “If we can build a primitive model of something so complex, we can possibly understand the dynamics of protein synthesis better.”

Bar-Ziv began this project as independent researcher after his post-doc at Rockefeller University in New York 12 years ago. “It took that long to get it to work,” the physicist says.

He accomplished his goal with Weizmann PhD students Eyal Karzbrun and Alexandra Tayar, in collaboration with his former fellow Rockefeller post-doc, Prof. Vincent Noireaux, now at the University of Minnesota. They recently reported on their achievement in the journal Science.

The artificial cell has multiple compartments, each a micron (millionth of a meter) thick and half a hair’s breadth wide, “etched’’ onto a silicon biochip and connected with thin capillary tubes that allow the diffusion of biological substances throughout the system.

The researchers inserted strands of DNA into each compartment along with an extract of E. coli bacteria lacking its own DNA. And then the magic of protein synthesis started taking place. 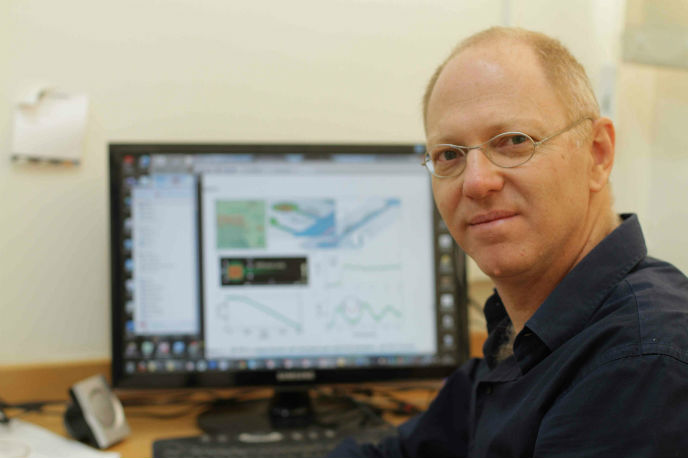 “Our on-chip ‘genome’ is in the form of a DNA brush with thousands of DNA strands attached at one of their ends to the surface like the hairs of a toothbrush. In principle, we can encode thousands of different genes. In practice, we demonstrated simple gene networks that are composed with just two genes hooked up to each other to create feedback.”

He describes cells as “protein factories” that constantly use feedback from inside and outside to respond to changes in environment.

“We’ll never be able to reproduce a complex cell that has evolved for millions of years. But can we design a primitive system that mimics the dynamics of all cells, synthesizing the appropriate enzymes and proteins to digest the food source and shutting down those not needed anymore.”

While natural cells are enclosed by a membrane that cannot be duplicated in a lab, Bar-Ziv borrowed principles from microelectronics to print any number and configuration of compartments onto super-thin silicon chips. Thin capillaries connect the compartments to each other and to an outside reservoir through which the scientists flow in nutrients.

Manufacturing proteins in a lab is nothing new, he explains, but never before have scientists been able to diffuse nutrients and protein-making machinery into very small cell-like compartments and control the mechanism of synthesis and shut-down.

“Our major achievement is having localization of protein synthesis on the surface, and turning on and off genes dynamically. That’s important, because in our own cells there is always a dynamic regulation going on between protein synthesis and gene shut-off. Without a mechanism to regulate that in artificial cells, you can’t have dynamic behavior such as oscillation. By embedding the appropriate genes, we were able to demonstrate for the first time dynamic modes approaching synthesis.”

The synthesized proteins diffuse through the network, regulating genes and producing new proteins in neighboring compartments.

Now the scientists are working toward building more complex gene networks in order to mimic pattern formations from nature, such as the striped patterns that appear during the formation of fruit-fly embryos. Studying these patterns would shed new light on very basic processes in early embryogenesis.

“We want to make this more and more complicated in the genes we put on the chip — we’ll go from two to five to 10 and so on,” says Bar-Ziv. “Can we implement an entire genome working together in a complicated network, as in a living cell? We can decide what we put on the surface and see what dynamics emerge.”

In effect, he explains, “we’re creating chemical factories programmable by virtue of which genes you put down on the DNA brush. You can think of miniature factories synthesizing different chemicals.”

Someday, programmable miniature protein “factories” based on this Israeli innovation could be used to fashion environmental sensors and sophisticated screening devices for pharmaceuticals.

Much work remains to be done before the concept gets to that point, says Bar-Ziv. His lab of eight, including graduate students of biochemistry, physics, computer science and bioengineering, is at the cutting edge of what he calls “a life work, a marathon run. I started the lab 11 years ago and not everybody thought we could do it, but we’ve proven we can. It’s very exciting.”

This academic year, Bar-Ziv is a fellow at Harvard University’s Radcliffe Institute of Advanced Study. He’ll continue on his project there and travel back to Weizmann several times during the year to supervise his team.