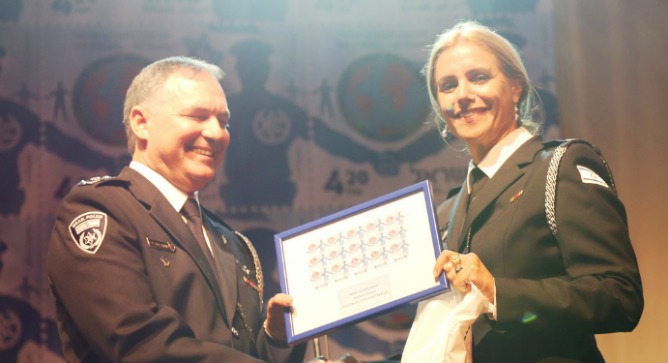 "The fact that I was chosen and that I am from Israel is a message in itself," says Police Superintendent Gal Sharon.

At midnight, most people who worked all day at an office job would be in bed. But then Gal Sharon, a superintendent with the Israel Police, has never been a cookie-cutter sort of person. At this witching hour, it wouldn’t be uncommon to find Sharon on a run along Tel Aviv’s beachfront.

The 50-year-old mother of three boys is a sports nut. And she has used her love of physical fitness to create bonds of friendship across nations.

While acknowledged among peers and family for many successful forays, her name was recently propelled to a wider audience when she was elected first vice president of the International Police Association (IPA) — unprecedented for an Israeli and a woman.

“I feel very proud to be the first vice president of this big an organization,” Sharon tells ISRAEL21c. “It’s chosen by secret ballot by people from all over the world. And it’s a great honor.”

The apolitical organization represents 430,000 police officers and has delegates in 69 countries. Some 850 members of the international group attended the IPA’s 20th World Congress in Eilat at the end of 2012. By an overwhelming majority, they voted Sharon to the prominent position.

In her new role, she is responsible for the social activity of the organization, emergency aid, sports, hosting and travel. She is also in charge of the World Police and Fire Games coming to Northern Ireland this year – the Olympics of the police force.

“Sport connects people and countries regardless of rank, sex, race, color, language or religion,” says the former triathlon competitor, who now runs only for pleasure. “People come, participate and meet new people from all over the world. That’s one of the goals of IPA — to create bonds of friendship.”

An ‘ambassador’ for Israel

Sharon is the most popular member of the National Executive Commission of IPA Israel, Dr. Eran Israel, spokesman and secretary general of IPA Israel, tells ISRAEL21c. 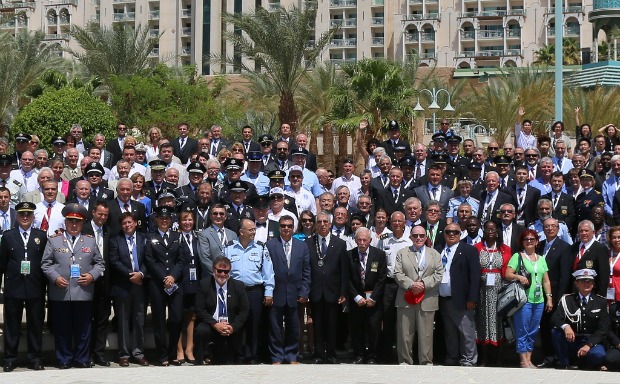 Sharon was elected during the IPA’s 20th World Congress in Eilat at the end of 2012.

She has been with the Israel Police for 30 years and filled dozens of positions in numerous departments, now holding the rank of superintendent. But it is in the IPA that she really began to shine.

From the moment she joined 12 years ago, Sharon became an active member, getting members and overseas colleagues acquainted through sports activities.

“The organization is like an ambassador for Israel and good for the state,” says Sharon.

The Israeli IPA delegation counts 23,000 members — the third largest branch in the world, after Germany and Austria.

The Israel section, established in 1963, has the highest ratio between the size of the delegation and the size of the police force. Its members include police officers, prison wardens, civil guard volunteers and pensioners.

“We have a small country and a small police force, but our IPA branch is one of the biggest and strongest in the world. We’re celebrating 50 years of IPA in Israel and I’ll make sure that every new recruit to the force joins the IPA branch,” said Police Commissioner Yohanan Danino at the Eilat event.

“It has not been easy,” she says. “It was a tough road but I proved myself.”

At the recent World Congress, she even scored more votes than newly elected International President Pierre-Martin Moulin. The organization is overseen by an international president and three vice presidents. Sharon was elected both the first VP and the chairperson of the International Social Commission. 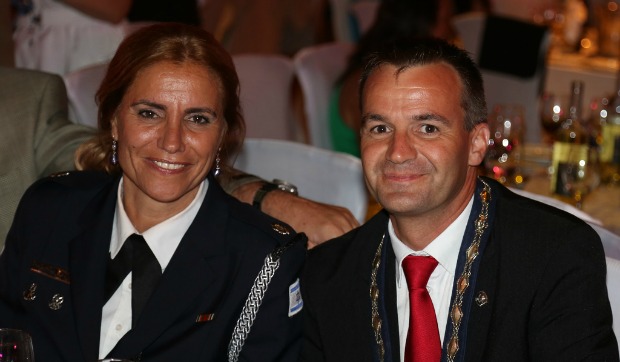 “The fact that I was chosen and that I am from Israel is a message in itself,” she says, noting many of the votes in her favor came from states that have no ties with Israel. “I’m from Israel but I don’t just represent Israel. The world police chose me and I represent everyone.”

Sharon started out as a detective and investigator at the Special Investigations Unit. Her long CV includes community-oriented policing services, the public council for delinquency reduction, fitness training, central recruitment bureau, publishing and marketing, the unit for the improvement of the service, and head of the public affairs unit. Now she’s specializing in the practice of law and is a police prosecutor in Tel Aviv.

“My family stands behind me in what I do and gives me a lot of support,” she says. “They’re happy for me because they see I achieved what I achieved by myself and that I never relied on someone else to move forward.”

She holds undergraduate and graduate degrees in sports and education, a law degree, various police officer course certificates, and a degree in marketing and public relations. She says her next goal is to become totally proficient in English. “When I do something, I want to do it the best I can. I can speak and understand but I want to be faultless,” she says.

Part of her new responsibility at the IPA was to represent Israel at the UN, but she had to forgo that because she is still an active member of the Israel Police. But she didn’t mind passing it on to another member. After all, Sharon still sees a long, fruitful career with the IPA.

“It’s important for me to finish specializing in law. Nothing is burning. When the IPA president decides to step down, I’ll consider running for the position,” she says, then adds: “And I believe I will be president one day.”

UNCOVER ISRAEL - Get the ISRAEL21c
Weekly Edition free by email
Sign Up Now!
Bring Israel's story to life.
Millions of people around the world rely on us to gain a deeper understanding of Israel. We are the trusted source for original content you won't find anywhere else.
You can make a difference. Donate today to support journalism that brings Israel’s story alive.
SUPPORT ISRAEL21c
Read more on:   People, Gal Sharon, International Police Association, World Police and Fire Games