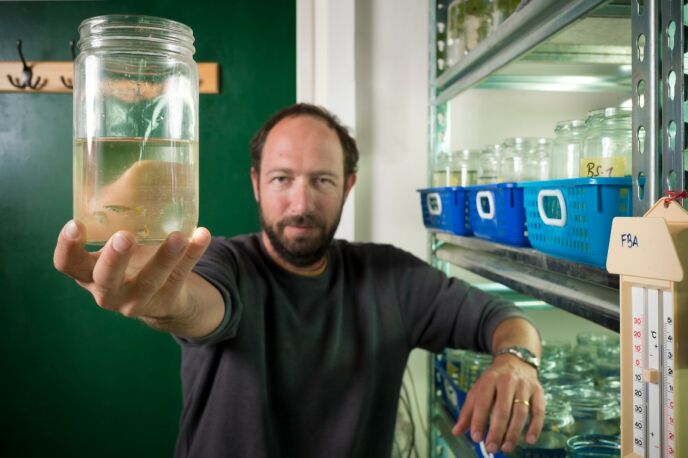 They are the first however, they believe, to explain why this is happening –– and their research could help conservationists give fish a fighting chance on fish farms and in the wild.

The research was published in the Proceedings of the National Academy of Sciences (PNAS).

Combining biology with physics, the two researchers uncovered a process called hydrodynamic starvation. Their studies show that most baby fish are destined to die because they are unable to feed from their environment due to a process limited by the physics of water.

“Unlike mammals, most fish release eggs and sperm externally in the water. There is almost no maternal care. The fertilized eggs drift to the ocean where the larvae hatch,” Holzman tells ISRAEL21c. “In the beginning they have no mouth and feed off their yolk sac. Once they start feeding, most of them start dying. Within two weeks, over 90% of the larvae have died. This phenomenon has been known for over a century. 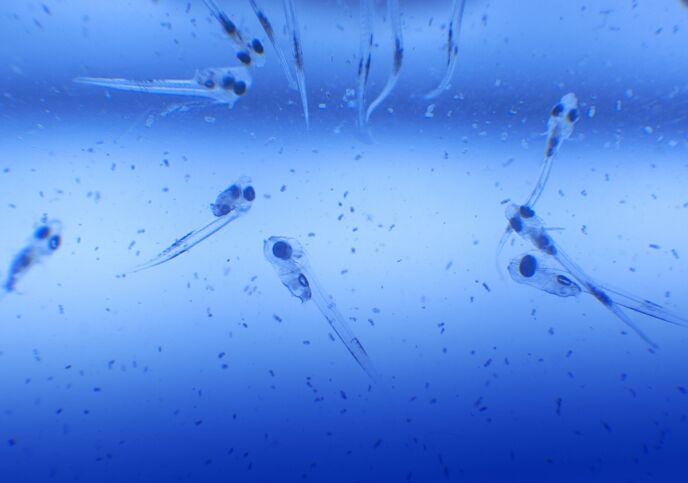 Most of these fish larvae won’t make it to maturity

Multiple hypotheses over the years have speculated that the problem stems from pollution, drifting, unsuitable habitats, lack of food, predation or disease, he explains.

But even under the best conditions, at least 70% of newly hatched fish still die. For example, the Tel Aviv researchers found that at Har Dag, a veteran fish farm in Eilat, typically 250,000 larvae survive from one million hatched eggs.

“It’s obviously something else that is happening here. There are no predators, they don’t drift and they have plenty to eat,” says Holzman. “I started thinking about this problem four years ago and yet found no one who had come up with a good answer. In research, your best commodity is your question, not your answer.”

What Holzman and his colleagues discovered is linked to the physics of small things. There is an interaction of fish bodies and their surrounding fluid, and this interaction changes with size.

Due to weak electric signals between a body and the water, a small layer of water sticks to the surface and gets dragged around with the fish. We don’t feel this when we dive into the water because humans are so much bigger than fish larvae. But this layer lies heavy on the tiny larvae.

“When you are small you drag a proportionately huge layer of water around with you, which changes the way organisms feed and swim. When you are very small you can’t use fins or a propeller, but swim with a screw-like instrument called flagella,” Holzman explains.

This business of swimming with flagella can get sticky and can prevent a small larva from opening its mouth to generate a flow of water carrying in prey.

“This mode of feeding can fail,” says Holzman, who set up an experiment that increased the viscosity of water, using dextran, showing how even bigger, more successful larvae can fail at feeding, and then fail to thrive.

Honey, we shrunk the fish

“We showed that in these conditions the bigger larvae behave and feed like the small ones. Like the movie Honey, I Shrunk the Kids, we took old larvae and made them feel tiny again. They failed to feed because of the high viscosity in the water. They were not adapted under these circumstances,” says Holzman.

They put all the experiments on film, which was no easy task as the larvae are three to four millimeters long and almost transparent. Their mouths are about 100 to 200 microns in size, and take a quick 20 milliseconds to open and close.

Holzman is reasonably sure that fish larvae die off not from pollution, but a survival mechanism inherent in nature: “The whole reproduction mode is coping with the loss of so many, like sperm production in human males.

“But I think there is an edge here. If this is the system, we can think about what we can do artificially to increase survival to get better products when doing agriculture – to increase growth rates.”

He thinks that overfishing, rather than hydrodynamic starvation, is the simple reason why fish populations have crashed globally.

Next, the scientific community may be able to apply Holzman and China’s finding to figure out ways to improve the odds for fish around the world.