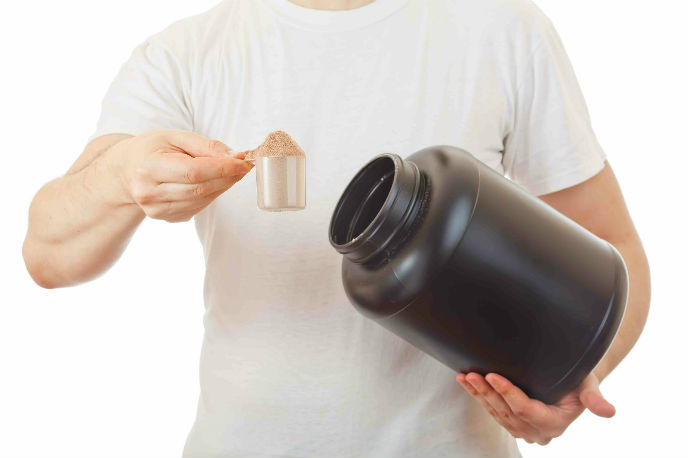 Whey may be the way to go. Image via Shutterstock.com.

Bodybuilders ingest buckets of whey protein powder to bulk up their muscle mass. But researchers from Israel have found a new blood-smart reason to eat like a “hulk” before meals.

A new study by Israeli and Swedish researchers has found that a plain whey protein drink one half hour before breakfast could help diabetics, or those on the verge of diabetes, prevent blood-sugar spikes and better manage the disease.

Researchers Prof. Daniela Jakubowicz and Dr. Julio Wainstein at Wolfson Medical Center in Holon; Prof. Oren Froy of the Hebrew University of Jerusalem; and Prof. Bo Ahrén of Lund University and their colleagues studied a group of people who consumed whey protein before eating a high-glucose meal.

When compared to a control group that did not ingest the whey, the results were astonishing, according to a summary of the research published in July in the journal Diabetologia  of the European Association for the Study of Diabetes.

It is common knowledge that eating protein stimulates GLP-1, a hormone in the gut, to produce insulin. If so, researchers hypothesized, GLP-1 should be able to help the body control blood sugar after eating a meal.

In the study, the researchers examined 15 people who had type 2 diabetes and were managing their symptoms without medication. These people were offered a protein drink in a hospital setting –– 50 milligrams of whey protein in one cup of water –– and then one half hour later were given a meal with a high glycemic index.

The breakfast included three pieces of white bread and jelly made with sugar. Over the course of two weeks, each person in the group received the whey drink or a placebo of water before the meal.

Blood was sampled in all groups 30 minutes before the meal and then at 15, 30, 60, 90, 120, 150 and 180 minutes later, similar to the battery of tests a pregnant woman undergoes as she is being tested for gestational diabetes.

The design of the study is statistically powerful, the researchers say, because the same patients were tested with both the placebo and the whey drink over a course of time.

Those who drank the whey mixture before the meal had protection from the high-glucose meal. Blood-glucose levels were reduced by a whopping 28 percent compared to those who did not drink the whey.

Looking deeper, the researchers reported that both insulin and C-peptide, which is part of insulin, were both higher –– some 105 percent and 43%, respectively –– in the whey protein group.

Also, an early insulin response was noted to be 96% higher among those who ingested the whey. This response is significant in terms of a diabetic’s ability to deal with a post-meal increase in blood sugar.

Whey protein drinks before a meal, and without any other sugar or nutrients added, could be a cheap and meaningful way to help people manage diabetes, the researchers suggest.

More research on the long-term effects of whey on a diabetes patient’s blood, however, is needed to see if the effects will remain high over time.